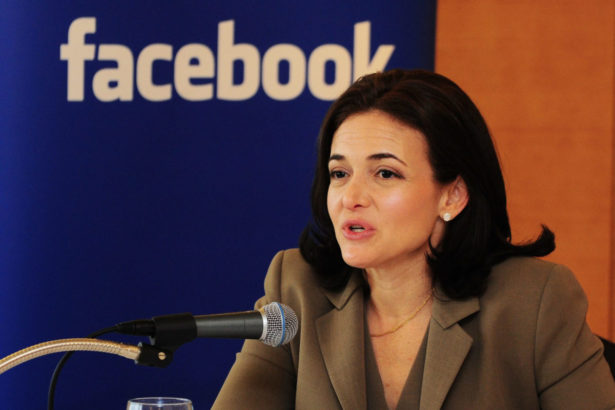 In the midst of a campaign by Palestinian journalists accusing Facebook of suppressing their content, Facebook’s Chief Operating Officer, Sheryl Sandberg, has pledged $2.5 million to the ADL, an organization that devotes much of its work to Israel advocacy.

We’ll first look at the complaints about censorship, then at the ADL, and then at Sandberg.

The current campaign is the latest in a long line of complaints that Facebook discriminates against Palestinian users.

A 2016 Fortune magazine article reported accusations that a Facebook agreement with the Israeli government had led to the closing of some Palestinian accounts.

A 2017 article in The Intercept reported: “Facebook has been on a censorship rampage against Palestinian activists who protest the decades-long, illegal Israeli occupation, all directed and determined by Israeli officials. Indeed, Israeli officials have been publicly boasting about how obedient Facebook is when it comes to Israeli censorship orders.”

A day or two later Facebook deleted yet another Palestinian page: the Arabic account of the Palestinian Information Centre (PIC), a news organization founded in 1997 that had almost five million Facebook followers. According to PIC, Facebook provided no prior warning or justification for its action.

Over the years it appears that Facebook has tried to develop strategies to make fair, rational decisions about which content to remove and which accounts to take down. These have included using content reviewers, instituting a review process, and writing algorithms to catch “hate speech” and “incitement.”

At the heart of of all this, however, are the human beings who review the content, who write the algorithms, and who are in charge of the process.

And it is problematic when the number two person at Facebook – especially during a time period when Facebook is specifically being charged with anti-Palestinian, pro-Israeli bias – makes a large, very public donation to an organization devoted to advocating for Israel.

The ADL and Israel

On Oct. 16th Facebook COO Sheryl Sandberg announced (on Facebook, of course) that she was making “a personal gift” to the ADL. Sandberg is considered one of the most powerful figures in the tech world.

While many people consider the ADL a benign, almost official organization–and news media virtually always repeat its claims without scrutiny–it is a highly political, private organization with no public accountability and with very  clear agendas.

One of its main agendas is being a “a strong voice for Israel.”

While the ADL was allegedly formed to oppose discrimination, it actively supports a nation based on discrimination. Israel was established in 1948, in the words of an Israeli historian, through a war of ethnic cleansing, and continues this process today.

Numerous groups and individuals have documented Israel’s current systemic discrimination, its long record of human rights violations, as well as its violations of U.S. laws and damage to the U.S.

Nevertheless, the ADL devotes much of its effort to Israel, advocating on its behalf with American elected officials, U.S. media and on American campuses, including producing a guide about how to block campus events aimed at informing students about the Palestinian situation.

And while the ADL claims to oppose defamation, it often attacks groups and individuals its dislikes, particularly those who provide information on Israel-Palestine that the ADL doesn’t wish Americans to know .

While the ADL’s statements may at times constitute outright defamation, almost no one is able to take on the organization, given its assets of $145 million+. Rare exceptions were 1993 lawsuits over the ADL’s vast spying operation on Americans, which had gone on for decades. Eventually, the ADL was forced to settle the suits, paying out unknown sums of money. (In the interest of full disclosure, I’m among the ADL’s more recent targets, the organization having published false statements about me that it has refused to retract.)

In 2017 the ADL collaborated with an Israeli think tank to produce a 2017 strategy paper on how to counter the growing public awareness of Israeli violations of human rights. The Israeli Minister of Strategic Affairs, Brigadier General Sima Vaknin-Gil, said of the ADL-coauthored paper: “The correlation between the Ministry’s mode of operation and what comes out of this document is very high, and has already proven effective… ”

Among its recommendations, the 32-page document called for “industry engagement with corporations such as Google, Facebook, and Twitter.”

That same year the ADL launched the “Center for Technology and Society,” whose advisory board contains a number of tech executives.

One is Facebook Vice President Guy Rosen, who studied in Israel and is a member of the TechAviv Community LinkedIn Group, formed “to help Israeli startup founders and their companies succeed by harnessing the collective energy, knowledge, and networks of the global Israeli startup community.”

The ADL considers many criticisms of Israel to be “anti-Semitism,” using a definition formulated by an Israeli minister. The materials it provides for schools are highly selective, often have clear agendas, and are glaring in the ADL’s “PEP” stance (Progressive Except Palestine). For example:

• There is a high school unit on the Rohingya people but nothing on the Palestinian people.

• The ADL provides a lesson plan on “Refugee Crisis in Europe” that makes no mention of Palestinian refugees, a major refugee group and one that began long before the current crisis.

• There is a teaching unit on nonviolent resistance that includes materials on The Holocaust, Civil Rights, sanctuary cities, opposition to the U.S. wall on the southern border, etc, but completely ignores the Israeli wall confiscating Palestinian land, the ongoing nonviolence movement in the Palestinian West Bank (including the killing of participants Rachel Corrie and Tom Hurndall), and   the massive nonviolent movement launched in Gaza a year and a half ago that has continued for every week since.

• A unit on “Challenging AntiSemitism: Debunking the Myths and Responding with Facts” includes a number of references to Israel and uses as a reference the Jewish Virtual Library, a website managed by the American-Israeli Cooperative Project in order to “to strengthen the U.S.-Israel relationship.” (The unit includes derogatory references to Christianity, Islam, and Arabs.)

The ADL’s facebook posts periodically focus on Israel. For example, it “welcomed” the decision to remove Palestinian Zahra Biloo from the Women’s March over her criticism of Israel, announced that it would discuss “bias against Israel” with UN officials, and alerted its Facebook followers to a discussion about “how to fight” anti-Zionism.

Sandberg has visited Israel periodically throughout her life.

In August, she went on another family visit to Israel, met with Israeli President Reuven Rivlin and others, and inaugurated a new Facebook venture in Tel Aviv.

In her Facebook post, Sandberg described the importance to her of her Jewish identity. She said that her horror at the recent tragic “mass murder” of Jews in Pittsburgh (11) and Germany (2) inspired her to make the donation.

The timing of her announcement is startling in its lack of concern for the current Palestinian campaign against unfair treatment by Facebook, and of recent Palestinian deaths and injuries inflicted by the Jewish state.

In the past year and a half Israeli forces have killed at least 326 and injured over 28,000 men, women, and children taking part in demonstrations in Gaza.

A search for donations that Sandberg may have dedicated on behalf of these victims turns up only an ambulance – which she presented to Israel, which has suffered massively fewer deaths and injuries. 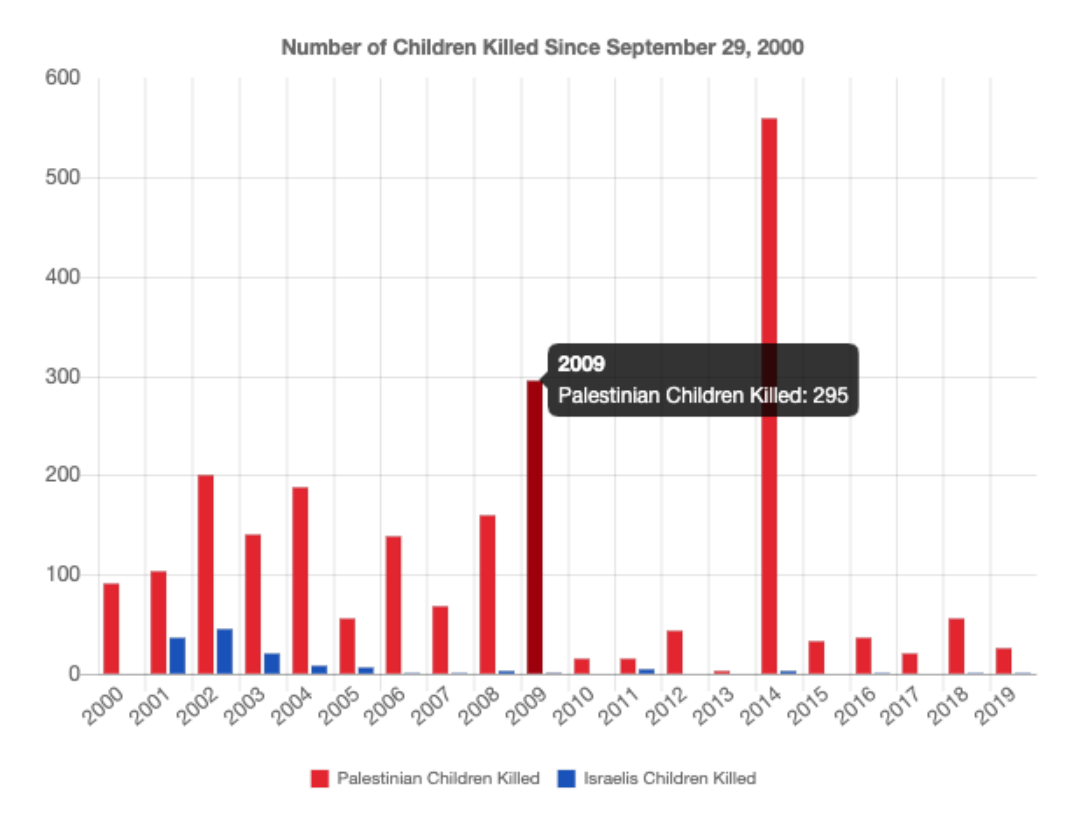 Given Sandberg and the ADL’s opposition to “hate” and “bias,” they may wish to read the extensive documentation of widespread discrimination and hatred in Israel.

“One question that bothers many people,” she says, “is how do you explain the cruel behaviour of Israeli soldiers towards Palestinians, an indifference to human suffering, the inflicting of suffering. People ask how can these nice Jewish boys and girls become monsters once they put on a uniform.”

Peled-Elhanan said: “I think the major reason for that is education. So I wanted to see how school books represent Palestinians.” In studying hundreds of Israeli textbooks she did not find one photograph that depicted an Arab as a “normal person.”

Peled-Elhanan says that as a result of the Israeli school system, Israeli children grow up to serve in the army and internalize the message that Palestinians are “people whose life is dispensable with impunity. And not only that, but people whose number has to be diminished.”

Perhaps Steinberg’s next anti-hate donation could go to Peled-Elhanan.

And perhaps instead of working with the Israeli government to remove Palestinian posts that document the results, Facebook executives could meet with the Palestinian journalists and activists they’re censoring and listen to what they have to say.