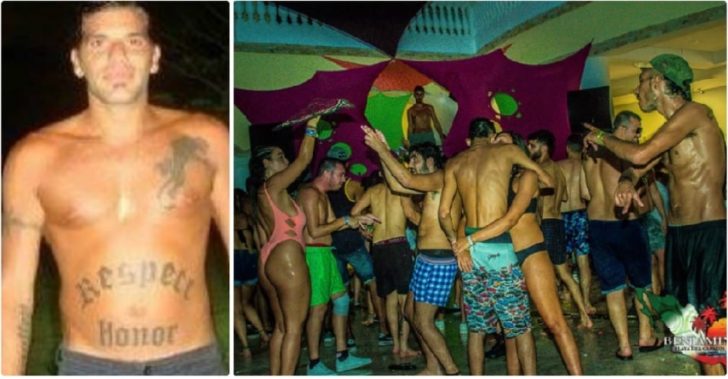 A former Israeli soldier was deported from Colombia for alleged links to a criminal network suspected of drug trafficking and child prostitution that spanned across several countries in Latin America. Colombian news agencies reported that a group of ex-Israeli soldiers had turned a small fishing village into a “sex and drug den” from their base in a luxury resort that was known to locals as “little Israel.”

A former Israeli soldier was deported from Colombia for alleged links to a criminal network suspected of drug trafficking, child prostitution and tax offenses that spanned across several countries in Latin America.

Forty-three-year-old Assi Moosh was expelled by Colombia and returned to Tel Aviv under escort by immigration officers last weekend. In a statement confirming the deportation, security officials said: “Police in Santa Marta, capital of the Magdalena department, hereby announce the removal of an Israeli citizen who owns a spa hotel frequented by many foreign tourists. Deportation procedures have been commenced as per law and will be carried out due to the Israeli’s conduct, which has harmed Colombia’s national security.”

Colombian news agencies reporting on the deportation revealed details surrounding the expulsion of Moosh who was exposed as being part of a group of ex-Israeli soldiers that had turned a small fishing village in Taganga into a “sex and drug den” from their base in a luxury resort that was known to locals as “little Israel”.

El Heraldo, a regional newspaper, revealed Moosh as the head of an “international network of human trafficking, micro-trafficking and sex tourism”. The Israeli gained a reputation locally for organising private parties in a room within his hotel. From their base in “little Israel” Moosh is reported to have run similar clubs exploiting drugs and children in Cartagena, Bogotá, Medellín, Ecuador, Mexico and Brazil.

Local sources reported that Moosh was arrested when he arrived in the immigration office in Santa Marta accompanied by a group of armed men. It’s believed that he had been trying to obtain Colombian citizenship.

According to the national police, Moosh had raised suspicion after it was discovered that his permits for tourism and hotel operation were obtained through a third party, enabling him to carry out criminal activities undetected for a decade.

Locals are said to be “relived” by the arrest. Residents told journalists that Moosh “had been one of those who destabilised the social order of the people.” Many felt he should have been arrested long ago.

The mystery for many locals, according to El Heraldo, was the Benjamin hotel. Residents of Taganga described the resort as a “bunker” run by Moosh “exclusively for Jews”. While it’s unlikely that many of the locals would have actually seen the inside of the luxury resort, the feeling that it was an unwelcome place for non-Israelis has even been reported by visitors on TripAdvisor. “Not Israeli? Forget about it” wrote one visitor who had given the hotel two stars in the review. “First off this is a good hotel/hostel but if you are not from Israel I wouldn’t go there my wife and I were made to feel very uncomfortable even had people come up to us and say ‘are you from Israel?’ I said ‘no’ to their reply ‘then why would you come here’.”

Reports of how “ex-soldiers turned a Colombia fishing town into a sex and drug den” had been on the media’s radar for a while. In February Colombia Reports uncovered the tension within the popular tourist region caused by the Benjamin hotel. The report found that “Benjamin [hotel] employs and accommodates almost exclusively Israeli citizens, and was officially opened by 20 rabbis brought over especially from Israel”.

Security in the hotel is reportedly coordinated by a Willington Vasquez, who, according to the report is also known as “Manuel, a former member of a paramilitary death squad”. Locals from Taganga complained that the Israeli “tourism entrepreneurs” were running a drug trafficking network and prostitution business.

The friction between locals in Taganga and the Israelis was also reported in 2012. “Four Israeli ex-soldiers are the new ‘masters’ of Taganga” was the headline in the El Tiempo. The paper alleged that the Israeli “businessmen” were selling cocaine and sexually exploiting young girls.

A journalist from El Tiempo investigating the allegations spoke with local officials, residents and the Israeli businessmen who pleaded innocence saying that “the community is wrong, everything is false”.

But the report proved otherwise. The authorities said that they were “clear several Israeli ex-soldiers who arrived in that village” were “leaders of criminal gangs”. The authorities complained that the Israelis took over social premises, violated rules on tax payments and permits and were involved in selling drugs and sexually exploiting children.

The ex-Israeli soldiers became known as “the untouchables”. El Tiempo journalists travelled to the area and discovered that some of them were living in a concrete mass, guarded by eight security cameras. Others carry arms and move in 4×4 trucks flying the Israeli flag.

Testimonies from villagers and local authorities, who, El Tiempo said requested anonymity for fear of reprisals, exposed the drug and prostitution industry that had blighted the small fishing village.

Their standoff with the ex-Israeli soldiers led locals to create a committee and to request help from the Santa Marta administration.

Mayor of Santa Marta at the time, Carlos Caicedo, told El Tiempo that the situation in Taganga is serious and that he will ask the Israeli embassy and the Ministry of Foreign Affairs to review the legal status of the ex-military personnel settled in the Benjamin hotel.

Residents of Taganga appealed to their government to end the criminal activity in their village and a request was also made to the Israeli embassy, according to El Tiempo, to sanction the criminal behaviour of its nationals.

As for Moosh, it’s reported that Colombian authorities have imposed sanctions on him which prevent him from returning to the country for at last ten years.

Also known as Assi Ben-Mosh, he has been connected with drug trafficking and sexual exploitation throughout Europe and in Japan and has been investigated by police in Spain, New Zealand, Australia, Japan, Thailand, India and Brazil.