You Are Here: Home → DOUBLE STANDARD: The Hill refuses to publish column about USS Liberty 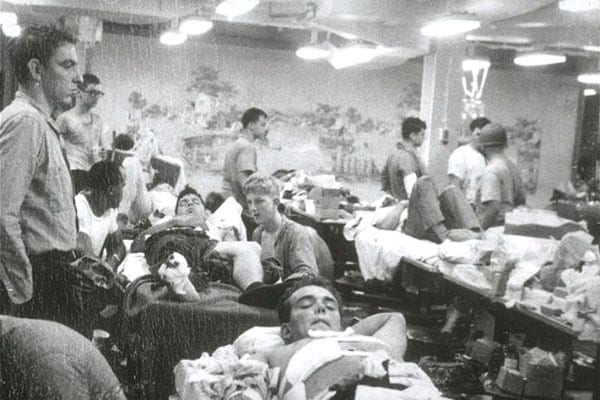 USS Liberty crew members attacked by Israeli forces on June 8, 1967. Over 170 were wounded and 34 killed. This is reportedly the most decorated crew for a single engagement in US Naval history.

The Hill, a major Washington DC publication, published a guest column on November 15th entitled “Passing the Taylor Force Act Will Mark a Vital Step in the War on Terror.” The column called for the U.S. government to stop payments of $300 million aid to Palestinians, based on the murder of an American serviceman by a Palestinian individual who was unaffiliated with the Palestinian Authority, Hamas, or any other Palestinian organization. (Info here.) The authors of the column were officials of the pro-Israel advocacy organization JINSA (Jewish Institute for National Security of America)

In response to that column, Marine veteran Geoffrey ONeill submitted a column suggesting that the $3.8 billion given by the U.S. government to Israel be suspended, based on the Israeli military’s killing of 34 American servicemen, injuring of 173+ American servicemen, and attempt to sink a US Navy ship with all men aboard. (Info here.)

The Hill, however, would not publish that column.

UPDATE: On Dec. 9th The Hill posted a second biased article praising the Taylor Force Act, this one by the zealously pro-Israel neocon Herbert London, a former national board member of Friends of the IDF who speaks at Zionist Organization of America events and was widely accused of making false claims of “antisemitism” against his opponent in a New York political race.

Below is the article by Geoffrey ONeill that The Hill would not publish:

Cut off aid to Israel for killing American servicemen

This is a response to an article in The Hill recently titled “Passing the Taylor Force Act Will Mark a Vital Step in the War on Terror” by authors Michael Makovsky and Mark Fitzgerald. The authors are calling for the U.S. government to stop payments of $300 million dollars to Palestine based on the murder of American serviceman, Taylor Force by a Palestinian. While I condemn gratuitous violence, particularly murder committed by anyone on another person and would, if given a chance, express my condolences to the family of Taylor Force, I find it ironic that the authors would express such outrage of a murder committed by a Palestinian of ONE American serviceman. Perhaps the authors need be reminded of an act of terror committed years ago of an entire crew of American servicemen in international waters off the coast of the Sinai Peninsula on JUNE 8, 1967. It might put their outrage and demands in a different perspective. Of course I am referring to the unprovoked, ruthless attack by the IDF on the USS Liberty.

On that bright clear day, after surveilling the ship several times, with the American flag in plain view, the IDF attacked the Liberty killing 34 of its crew and wounding at least 173 others. The Liberty was an electronic surveillance ship, essentially defenseless with only two 50 caliber machine guns mounted on the decks to ward off pirates.

After jets strafed the decks with rockets, bombs and napalm, torpedo boats showed up to finish the job. Three torpedoes were fired. One was a direct hit on the side of the Liberty that killed 25 men. Meanwhile on deck, American sailors were lowering life rafts into the water to help the wounded to safety. The Israelis shot the life boats out of the water to ensure everyone stayed on board. Authors Makovsky and Fitzgerald I assume are educated enough to know that sinking life boats is a violation of International law and considered a war crime forbidden by the Geneva Accords.

The attack lasted for an hour and a half then was suddenly called off when the IDF intercepted an SOS from the Liberty sent by a sailor who managed to jury rig wires and get the message to the Sixth Fleet.

What happened next was typical, lies, obfuscation and cover up. The IDF immediately called the Pentagon claiming they MADE A MISTAKE. Suffice it to say, President Lyndon Johnson by caving to pressure from pro-Israel lobbying , ordered a media blackout and a cover up of the incident. In an incredible act of betrayal, the brave survivors were sworn to secrecy about the attack. They were told if they spoke of it to anyone, including members of their own family, they would face court martial and imprisonment. This was not only a betrayal to the crew of the Liberty but to all American servicemen, past and present, including yours truly.

If anyone is interested in a detailed, well sourced graphic summary of the attack on the Liberty, I suggest you read the second chapter of renowned journalist Alan Hart’s excellent, highly acclaimed book, Zionism The Real Enemy of the Jews. It refutes all claims of a “mistake” and the anti semitism meme that follows any criticism of Israel.

The State Department demanded $17 million in reparations for the Liberty survivors. Israel offered $6 million which was accepted immediately by President Johnson in a cowardly sniveling way. The state-of-the-art ship was valued at $40 million.

In fairness I would like to suggest a compromise to Mr. Makovsky and Mr. Fitzgerald. I appreciate your outrage at the murder of an American serviceman by a Palestinian. Having said that, If you gentlemen are sincere and honest, you should be far more outraged about what your government did to an entire crew of American servicemen. So, here is the compromise I suggest. I will enthusiastically lobby my government to suspend payments of $300 million to Palestine if you guys lobby to suspend annual payments of $3.8 billion, not million, to the Israeli government. That way we save the American tax payer $4.1 billion annually. Millions of Americans are living in poverty and the $3.8 billion given to the Israeli government represents about $30,000 for each Israeli citizen. In all seriousness, do you need that much money from us in that so many here are homeless and living well below the poverty line? Really? What do you say fellas, do we have a deal?

Geoffrey ONeil is a retired business owner. He was a Marine officer during the Vietnam conflict with a 13 month forward area tour.

Information on the Israeli attack on the USS Liberty