You Are Here: Home → Even pro-Israel Democrats may block debate on S.1 until Republicans allow vote on reopening government

Even pro-Israel Democrats may block debate on S.1 until Republicans allow vote on reopening government 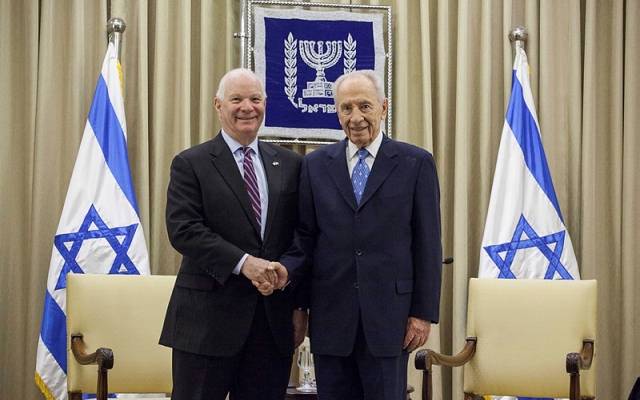 Democratic Senator Ben Cardin (L) in Jerusalem with then-President Shimon Peres in Feb. 2012. Although Cardin backs anti-boycott legislation, he doesn’t want the bill debated until Republicans call a vote on bills to reopen the government. (Image from United with Israel, the Global Movement for Israel)

The Senate is scheduled to vote on a motion to proceed to open debate on the Strengthening America’s Security in the Middle East Act of 2019 — legislation that would authorize U.S. military assistance to Israel [$38 billion] and empower local governments to take up anti-BDS measures. However, a growing number of Democrats have announced their opposition to the legislation until the Republicans call a vote on the House-passed bills to reopen the government.

[Go here for Information on S.1 and a link to contact your Senators about it.]

Following the lead of Senators Chris Van Hollen and Ben Cardin from Maryland, Senate Minority Leader Chuck Schumer announced yesterday that he will vote against the procedural vote in protest of the ongoing shutdown. McConnell spokesman Don Stewart said in response, “It would be a stunning reversal for Sen. Schumer to suddenly block security assistance to Israel simply because he can’t work out his differences with President Trump on an unrelated matter.”

Sen. Marco Rubio (R-FL) claimed on Monday that Senate Democrats are using the shutdown as a cover for divisions within the Democratic caucus over the anti-BDS measure. “A huge argument broke out at [a] Senate Dem meeting last week over BDS,” Rubio wrote on Twitter. “A significant number of Senate Democrats now support BDS and Dem leaders want to avoid a floor vote that reveals that.”

Sen. Chris Murphy (D-CT), who serves with Rubio on the Senate Foreign Relations Committee, disputed that characterization. “You know it isn’t true that ‘a significant number of Senate Dems support BDS’. [It’s] really dangerous to play politics with support for Israel,” Murphy tweeted.

A Senate Democratic source tells Jewish Insider‘s Jacob Kornbluh: “Rubio’s tweet is inaccurate and doesn’t portray the meeting as it happened, which its focus was, amongst the caucus, to do everything possible to reopen the government, and not hold agencies that have nothing to do with paying for a wall hostage. If we’re going to be voting on stuff that has already passed the House, it should be the bill that reopens the government. This is more of a distraction attempt. Re-open the government and then consider all the bills that are brought to the floor.”

AIPAC spokesperson Marshall Wittmann emails us: “We strongly support this legislation which contains pro-Israel provisions that have previously gained wide bipartisan support – and we urge the Senate to move as quickly as possible to adopt it.”

Anti-BDS Bill Battles up Senate Hill — by Armin Rosen: “Hill sources have confirmed to Tablet that the meeting in the question occurred last Thursday and that the anti-BDS measure was discussed.” [Tablet]

[Senators Bernie Sanders and Dianne Feinstein have opposed anti-boycott legislation as a threat to free speech.]

The Senate is scheduled to discuss this at 3 EST today – proceedings can be viewed here.

The Green Party of New Jersey Questions the New Congress’s Priorities — Military Aid for Israel Instead of Re-opening the Federal Government?

On Tuesday, January 8th, in the midst of a partial shutdown of the federal government, the U.S. Senate will be voting on a series of bills, packaged into one bill, S1. This is the first piece of legislation to be voted on by the new Congress. The Green Party of New Jersey questions why.

“What does this say about the priorities of the new Congress?” said Carrie Gordon, chair of GPNJ’s communications committee. “ Women in the WIC program, families on food stamps, and some federal employees are not getting paid at this time, but the U.S. Senate can think of approving the largest military aid package in U.S. history to assist the state of Israel.

In addition, S1 includes the criminalization of support for the Boycott, Divestment and Sanction movement.

What a chilling effect on the freedom of speech, for both individuals and corporations who support a boycott of Israeli products out of concern about the actions of the Israeli government toward Palestinians. Boycotts are a time-tested non-violent form of protest in the U.S. This should be honored and respected, not criminalized.”

“Both of New Jersey’s Senators, both Democrats, are co-sponsors of the Combatting BDS Act of 2019 portion of S1. The ACLU believes that even this version of the bill violates the essential right to freedom of speech. Additionally, instead of voting for even more military aid to Israel, shouldn’t we be focused on finding funding for community needs here at home?”

The Green Party of New Jersey urges New Jersey residents to contact Senators Booker and Menendez and to voice their opinion against the bill, by phoning the Congressional switchboard, 202-225-3121.