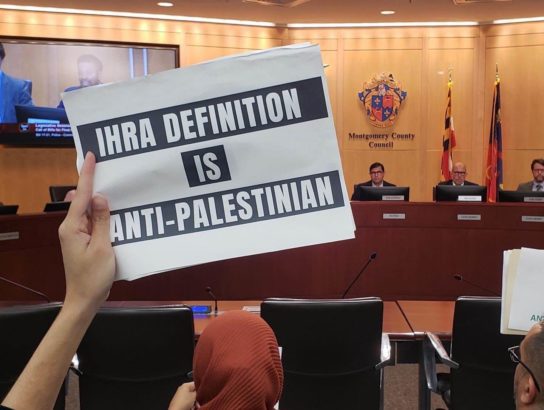 AN ACTIVIST HOLDS UP A SIGN AT A MONTGOMERY COUNTY COUNCIL MEETING ON OCTOBER 25 PROTESTING THE COUNCIL’S CONSIDERATION TO ADOPT THE IHRA DEFINITION OF ANTISEMITISM. (photo)

By Michael Aria, reposted from Mondoweiss

This month the U.S. Department of Education Office for Civil Rights (OCR) released a new fact sheet detailing protections for students who are Jewish, Christian, Muslim, or of any other religious group. The short document points out that the office enforces Title VI of the Civil Rights Act of 1964, which prohibits discrimination on the basis of race, color, or national origin in any program that receives federal funds.

The fact sheet is drawing attention, not over what it includes but because of what it omits. The OCR did not incorporate the International Holocaust Remembrance Alliance’s (IHRA) controversial working definition of antisemitism. That definition has drawn widespread criticism for defining certain criticisms of Israel as antisemitic.

The OCR’s decision is something of a surprise, as the Biden administration has repeatedly expressed its support for the definition. The White House has also faced heavy pressure from pro-Israel groups to adopt it officially.

“We are reassured to see OCR do the right thing: link the fight against antisemitism to other anti-racist struggles,” Palestine Legal Advocacy Director Lina Assi told Mondoweiss. “This gives space for Palestinian educators and students to continue to advocate for Palestinian freedom on their campuses without the fear of being investigated for false accusations. Alongside our movement partners, Palestine Legal will continue to highlight how pro-Israel lobby groups wield IHRA to silence and suppress Palestinians, and urge the Office for Civil Rights not to adopt it in a formal rule.”

The IHRA definition has faced backlash since it was first developed in 2016. It defines antisemitism as, “a certain perception of Jews, which may be expressed as hatred toward Jews. Rhetorical and physical manifestations of anti-Semitism are directed toward Jewish or non-Jewish individuals and/or their property, toward Jewish community institutions and religious facilities.”

Critics say this interpretation is vague enough to be wielded by individuals and groups looking to suppress speech that’s critical of Israel. They have also raised concerns about the contemporary examples of antisemitism that the IHRA attached to the definition. These include “Denying the Jewish people their right to self-determination, e.g., by claiming that the existence of a State of Israel is a racist endeavor” and “Applying double standards by requiring of [Israel] a behavior not expected or demanded of any other democratic nation.”

[Editor’s note: The IHRA definition is actually the latest iteration of a decades-long project to create a new, Israel-focused definition of antisemitism and then embed it in institutions around the world.]

In 2020 a group of 122 Palestinian and Arab academics and intellectuals published an open letter detailing their concerns about the definition. “Through ‘examples’ that it provides, the IHRA definition conflates Judaism with Zionism in assuming that all Jews are Zionists, and that the state of Israel in its current reality embodies the self-determination of all Jews,” it reads. “We profoundly disagree with this. The fight against antisemitism should not be turned into a stratagem to delegitimize the fight against the oppression of the Palestinians, the denial of their rights and the continued occupation of their land.”

Last November, 128 scholars urged the United Nations to refrain from adopting the definition. “Let us be clear: we wholeheartedly welcome the commitment of the UN to fight antisemitism and commend the UN for its vital efforts in this regard,” it reads. What we object to and strongly warn against is that the UN would jeopardize this essential fight and harm its universal mission to promote human rights by endorsing a politicized definition that is instrumentalized to deter free speech and to shield the Israeli government from accountability for its actions.”

Many supporters of the definition insist that Israel’s government can still be criticized under its parameters, but others freely admit that it can be used to stifle pro-Palestine sentiment. During a congressional hearing in September 2022, Israel’s antisemitism envoy Noa Tishby told lawmakers that, “We have to make clear: anti-Zionism is antisemitism. Period. End of story. There’s no question about that.”

The IHRA definition and the White House

In 2018 former president Donald Trump appointed Louis Brandeis Center Chairman Kenneth Marcus as head of the OCR. That same year Marcus declared that the office was already using the IHRA’s definition of antisemitism even though it was never formally adopted by the Education Department.

In 2019 Trump signed an Executive Order mandating that federal agencies consider the IHRA definition when enforcing Title VI. This opened the floodgates for pro-Israel groups looking to sue schools over alleged antisemitism. With the line between antisemitism and anti-Zionism effectively blurred, organizations (like Marcus’s Louis Brandeis Center) have been trying to argue that campus Palestine advocacy can constitute discrimination against Jewish students.

The Biden administration indicated that it would also implement Trump’s Executive Order, first in 2021 and then again last year. However, now they’ve announced that they won’t revisit the issue again until December 2023.

This news, coupled with the new OCR fact sheet, has predictably angered pro-Israel advocates like Marcus. “Imagine you have waited all year for a holiday present that was promised to you. But Christmas and Hannukah come and go, a new year is celebrated, and you get nothing,” he wrote in a Newsweek Op-Ed. “Not even an explanation or apology. Another week passes, and you get a card. You tear open the envelope and pull it out. You read the card, and the blood drains from your face. The message is trite. Then it hits you. You look again at the envelope, and you get it. The envelope is the present you have expected. It’s a much more modest version of what you were promised. And then you read that the real present will arrive in a year.”

These setbacks certainly haven’t deterred pro-Israel advocates like Marcus from continuing to take action. Last year he helped push a fabricated narrative about how the University of California at Berkeley’s School of Law was establishing “Jewish free zones.” In reality a Palestine campus group had simply instituted a bylaw calling on other student organizations to refrain from inviting Zionists speakers to the school, but the facts were seemingly unimportant to Marcus. After he made the dubious claim in a Jewish Journal Op-Ed it quickly spread across the web. He even cites the story in the Newsweek piece, claiming that “Jewish students and faculty have been marginalized, stigmatized, and excluded” across multiple schools.

However, while groups like the Louis Brandeis Center continue to pressure the federal government to embrace pro-Israel policies, there are a number of activists fighting to protect free speech. In August 2022, seventeen civil rights organizations (including Palestine Legal, Adalah Justice Project, American Muslims for Palestine, and the Center for Constitutional Rights) sent a letter to Assistant Secretary for Civil Rights Catherine Llahmon detailing the dangers of the definition. “Adopting the IHRA definition would infringe on bedrock First Amendment protections and establish a federal requirement for universities to abrogate their educational missions and violate campus free speech principles,” it reads.