You Are Here: Home → The COVID-19 vaccine: another ugly face of Israeli apartheid

The COVID-19 vaccine: another ugly face of Israeli apartheid 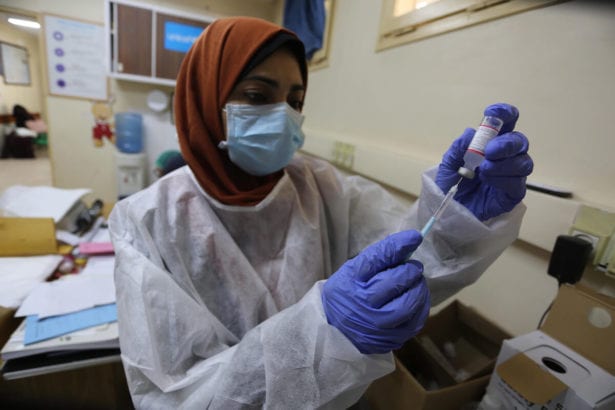 Vaccine apartheid: Palestinian employees prepare to give vaccines for polio and rota virus, but do not expect COVID vaccines anytime soon.

The apartheid system under which Israel operates inside the occupied territory could not be better displayed than in the case of the COVID-19 vaccine — who gets the vaccine, and who doesn’t, is a simple matter of nationality.

In fact, Israel could vaccinate its entire population before Palestinians receive a single dose.

[1.5 million] Israelis have already been vaccinated against the coronavirus, and tens of thousands of others are on track to do the same in the coming weeks.

Israel was one of the first countries in the world to begin rolling out the COVID-19 vaccine to its population, and according to the University of Oxford-run Our World in Data, is currently [first] in the world in vaccinations per capita.

The Israeli Health Ministry is aiming to vaccinate 100,000 Israelis per day as soon as this week, Israeli media reported, and Prime Minister Benjamin Netanyahu has made the bold claim of saying that Israel would be out of the woods “within a few weeks.”

Last month, Israel secured 8 million doses of the Pfizer vaccine — enough to cover nearly half of Israel’s population of 9 million, as each person requires two doses. Among those eligible to receive the vaccine from the Israeli government, are the nearly 2 million Palestinian citizens of Israel.

Those not eligible to receive the vaccine, however, are the more than 5 million Palestinians living under the control of the Israeli occupation in the occupied West Bank, East Jerusalem, and Gaza Strip.

The disparities between Palestinians living under Israeli occupation and Israeli citizens are constant, and simply a fact of everyday life in Israel and Palestine — laws that favor Israelis over Palestinians, and systems that actively discriminate against the latter are commonplace, and widely documented.

The apartheid system under which Israel operates inside the occupied territory, however, could not be better displayed than in the case of the COVID-19 vaccine — who gets the vaccine, and who doesn’t, is a simple matter of nationality.

“Firstly we have to be very clear: with military occupation in the West Bank and Gaza effectively under Israeli control, Israel is legally obliged by international law to provide for their [Palestinians’] healthcare,” Dr. Yara Hawari, Senior Analyst at Al-Shabaka: The Palestinian Policy Network, told Mondoweiss.

“Israel is legally required to provide that vaccine to Palestinians under occupation. We know they [Israel] have not done that,” she said, adding that Israel puts that responsibility on the PA as the service provider for Palestinians.

“That’s a real worry,” Hawari told Mondoweiss. “We know it’s likely that it will be a really slow process if it’s just left up to the PA.”

The ‘de-development’ of Palestine’s healthcare system

While PA officials have said that they expect to start receiving vaccines in the next two weeks via the World Health Organization (WHO), they’ve said it could be months before the vaccine is distributed amongst the general population.

The type of vaccines Palestinians will be receiving and the amount are still unknown [note: it has since been confirmed that the first shipments will be Russia’s Sputnik V vaccine], as they’re relying heavily on international donations for their supply, and the Palestinian government does not have the infrastructural capacity to store vaccines like the Pfizer one at the required low temperatures.

Meanwhile, Palestinians continue to live between unending periods of lockdown, as the virus rages across the oPt, with daily infection rates in the thousands and daily death rates in the double digits.

The PA’s inability to procure and store vaccines, along with its flailing healthcare system, is indicative of the decades worth of damage the Israeli occupation has done to Palestinian infrastructures, Hawari said.

“There’s this common recurring narrative that the reason the Palestinian healthcare system or other systems like education are inefficient and not doing their job because of incompetency on part of the Palestinian people or their culture — this idea that they’re stupid and can’t govern,” Hawari said.

“That’s obviously not the case. The Israeli regime has systematically targeted the Palestinian healthcare system and contributed to its de-development,” she said. “Palestinians have been forced to rely on outside help and have been prevented from being self-sufficient by the [Israeli] occupation, with the complacency of the international community.”

The most prime example of this, Hawari said, is Gaza, where the healthcare system has been on the brink of collapse for years, and has been unable to cope with years of Israeli bombardments and offensives.

“Hospitals in Gaza have been unable to cope with injuries and illnesses for years. They couldn’t cope before COVID, and now COVID has exasperated the situation and made it ten times worse.”

While Palestinians living under Israeli occupation in the West Bank and Gaza will not receive vaccines from the Israeli government, the hundreds of thousands of Israeli settlers living illegally in the West Bank are getting vaccinated every day.

Palestinian activists and their supporters have sounded the alarm over the stark disparity between who is getting vaccinated and who is not, saying it amounts to nothing less than Apartheid.

When talking about things like the COVID-19 vaccine, “there seems to be a false separation between Israel and Palestine,” Hawari said. “In reality it’s one entity where people are treated unequally within that space.”

“There is a huge amount of interaction between the populations, but totally imbalanced power levels,” Hawari continued, pointing to the tens of thousands of Palestinian laborers who work inside Israel and the settlements every day.

“The Israeli economy relies on that [labor force]. Will they be getting the vaccine as well?” she asked. “If not, that poses a risk to Israel. We’re such intertwined populations, as is the case in colonial populations.”

“It necessitates providing the vaccine for everyone, and should not be exceptional to Palestine. Someone said it perfectly: we’re not safe until everyone has access to the vaccine. This isn’t a virus that knows borders.”

While Israeli officials have floated around the possibility of providing some vaccines to the PA if necessary, Hawari cautioned against being fooled by Israel’s false displays of generosity, saying, “we know they will present such a move as great act of benevolence and international cooperation, but they’re not even meeting the minimum requirements under international law.”

Hawari highlighted the fact that in the midst of the pandemic, Palestinians have “seen very little from the Israeli regime in terms of supplies and support for Palestinians and their fight against the virus. And when they did finally coordinate to allow internationally donated supplies, it was praised as a wonderful form of cooperation, when that is the minimum that is required of them.”

“We’ve seen Israel do this for decades — Israel is constantly praised for letting Gaza cancer patients in to Tel Aviv  for treatment, but they are imposing the siege that prevents hundreds of Gazans from getting the necessary treatment in the first place,” she said.

“It’s a very clever spin on something that they are supposed to be doing, but that they’re not.”

At the beginning of the pandemic, groups like Adalah criticized the Israeli government for sidelining Palestinian communities in place like East Jerusalem, where coronavirus testing clinics were scarce to even non-existent.

Hawari is confident that “we will see those trends” again during the vaccination process.

“It’s still early and the vaccine is just rolling out, but if you look at implementation, they’ll [Israel] be rolling them [vaccines] out in clinics. And we know that of course in Palestinian villages and towns in ‘48, the health care system is deprived so there are fewer clinics and medical professionals, so it will be a slower roll out in those areas,” she said.

“It will be easy for the Israeli government to brush this aside and say ‘every Israeli citizens is treated equally,’ but if we look at the geography, those Palestinian communities by design have been left out when it comes to health facilities, clinics, and other essential institutions.”

As dozens of countries around the world, like Israel, the US, UK, and countries in the EU begin rolling out their vaccines to the general population, places like Palestine and other countries in the “Global South” have been left behind.

Even before the vaccines hit the market, rich nations began stockpiling some of the most promising coronavirus vaccines. According to the organizations like Amnesty International and Oxfam, it’s estimated that despite being home to only 14% of the global populations, rich nations have already bought 54% of the total stock of the world’s most promising vaccines.

Amnesty International has said that by the end of 2021, wealthier nations will have purchased enough vaccine doses to “vaccinate their entire populations three times over,” while some 70 poor countries “will only be able to vaccinate one in ten people against COVID-19.”

“What’s happening globally is very demonstrative of the structural inequalities that exist worldwide,” Hawari said. “Places like Gaza, where it’s difficult to even maintain basic sanitary and social distancing requirements, should be prioritized in order to prevent the spread. But of course they won’t be prioritized because of prevailing structures of oppression.”

“COVID has highlighted structures of inequality around the globe,” Hawari continued, saying she thinks “it’s almost impossible to have health justice and equality within these structures.”

“A step in the right direction, specifically in regards to Palestine, would be for Palestinians to immediately be provided with the vaccine, because they live vulnerable lives, and are a vulnerable community,” Hawari said. “This priority shouldn’t be exclusive to Palestinians, but to other countries in the global south as well. Access to healthcare shouldn’t depend on whether you can afford it or not.”