You Are Here: Home → Canadian Journalists for Free Expression under attack 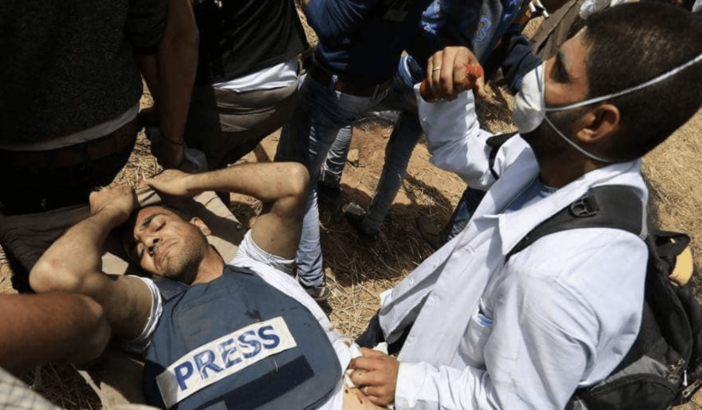 Yasser Murtaja, a cameraman who had worked for the BBC, was fatally wounded by an Israeli sniper while wearing a flak jacket that identified him as a member of the pressASHRAF AMRA/ANADOLU AGENCY/GETTY IMAGES

The Canadian Journalists for Free Expression website is gone. Kevin Metcalf, a main contributor to CJFE, describes how the website – and his job – met a sudden death after the organization made a strong statement condemning the targeting of journalists in Gaza by Israel. Metcalf states that this was the result of “an attempt by public employees to exert undue influence over a civil society group, on behalf of a foreign government.”

Free speech is at risk in order to hide the brutality of “the only democracy in the Middle East.”

From Kevin Metcalf, a main contributor to Canadian Journalists for Free Expression:

I’ve been advised that I can expect to be terminated from Canadian Journalists for Free Expression this coming Tuesday evening and have pre-emptively been removed from my social media roles and the organization’s website back-end. The cause for this termination, I have been informed, will most likely be the official cessation of the organization’s operations and its semi-permanent closure. Congratulations Canada, you’ve killed free speech. I have learned that in the last 72 hours, a half-dozen resignations have been tendered on the organization’s executive committee and Gala committee, including the resignation of the acting Executive Director and President of the Board. Those resignations came after we published a statement calling on Canada to condemn the woundings and killings of Palestinian Journalists by Israel during border protests.

The best reason I have been given thusfar for the organization’s collapse is that CBC (Canadian Broadcasting Corporation) employees who were powerful contributing members of the Gala fundraising committee resigned after they or their handlers at CBC disapproved of the statement, which condemned the Israel Defence Forces. A full version of the four paragraph statement is appended below. The organization has been in a fundraising crunch for some time. I have previously overheard at least one CBC employee telling members of the organization that their producer had pressured them to withdraw their support for CJFE in response to past controversial statements. This also happened when the organization took a position opposing the Anti-Terrorism Act, 2015 (formerly Bill C-51). A protest letter to Chrystia Freeland, the Minister of Foreign Affairs, condemning the killings and wounding of journalists and protesters in Gaza appears to have been sufficiently controversial for the worst-case scenario to play out.

Writing and publishing statements and protest letters is what is expected of me as per my job-description. It is clear that I am being punished for doing my job. I was asked to keep this a secret until Tuesday, but an hour ago, I was notified that the Board of CJFE pre-emptively ordered the statement removed from the organization’s website. As it is the subject of a spirited online discourse, a clear decision has been made to make this matter public. I was also notified that the organization’s Executive Director, who gave notice of resignation on Friday, complied with that request. Since CJFE moved to remove (see: censor) the piece from the internet I’ve also been forced to go public. It is troubling that pressure exerted by public employees at the state broadcaster has lead to the censorship of a protest letter by an advocacy organization. It is my opinion that this illustrates an attempt by public employees to exert undue influence over a civil society group, on behalf of a foreign government.

The order to remove the piece from the internet came a day after a Palestinian journalist was killed, and well after partner organizations the Freedom of the Press Foundation, Committee to Protect Journalists and Reporters Without Borders all published similar statements calling for condemnation of attacks against journalists and unarmed demonstrators. CJFE was the first of many western press freedom organizations who spoke out about the violence toward journalists in Gaza, and CJFE received the brunt of public criticism. Our statement was castigated on social media by The Globe and Mail’s Doug Saunders, The National Post’s Jonathan Kay and even Canadaland’s Jesse Brown referred to the statement as ‘stupid’ in a Twitter post. Notably, none of those journalists protested when CJFE sent identically strongly worded protest letters to the Governments of Iran, China, Croatia etc. on behalf of journalists or protesters facing violence in those countries. Those past statements were also universally applauded by CJFE’s board.

My confidence in the independence and ethics of the journalistic profession in this country has subsequently been shattered. It is clear that systemic racism, elitism and influence peddling at the top of Canadian media culture has created a permissive culture which is trying to legitimize the use of deadly force against journalists and demonstrators, even manifesting at the core of an organization whose mission is purportedly the stalwart defence of free expression. I have heard some people suggest that “The Media” is a monolithic entity, which is controlled by funding and funding relationships. It is whispered in dark corners that people who break ranks in journalism and publish without institutional cover, are ‘made an example of’ if things they write upset the industry’s key players or threaten their interests. I can tell you that while this isn’t universally true now, it’s naturally the end goal of an industry establishment to exercise narrative control over its members wherever possible, usually through intimidation, harassment, public humiliation or by leveraging financial connections. I know this is true, because it is what happened to me.

Posted below for posterity is the full text of the statement which cost me my job:

CJFE is gravely concerned by the extrajudicial killings of demonstrators which occurred on March 30, 2018 in Gaza. It has been reported that the Israel Defence Force (IDF) used sniper fire, tank rounds and “less lethal” munitions like tear gas during a civil order event on the militarized border between Israel and Gaza. The United Nations reported that 15 Gazans were killed and more than 1000 were wounded. The Palestinian Center for Development and Media Freedoms has stated that among those wounded in the massacre are many journalists.

We acknowledge the fact, as Israeli authorities have stated, that border demonstrations at the “March of Return” in commemoration of Palestinian “Land Day” were disorderly and boisterous in nature. We also recognize that the use of lethal force to respond to boisterous demonstration or civil disorder is an anathema to the principles of democracy, freedom and justice. Similar incidents have occurred in Tunisia, Syria and Ukraine. If similar incidents transpired in 2018, in any other country, the condemnation from the international community would be swift and clear.

Canada is recognized internationally as a close ally of the Israeli state. It is incongruous to profess support for democracy, human rights or press freedom while ignoring the deleterious effect that this repression by an allied state has on these values. Failure to condemn the IDF’s brutality will undermine Canada’s moral authority when condemning similar acts by any other nation-state. Targeted attacks against demonstrators and journalists must be condemned wherever they occur. Canada must speak out to defend universal principles of human rights, democracy and press freedom.

The Government of Canada must condemn the one-sided use of military force against civilian demonstrators and media in Gaza, must immediately call for a cessation of these brutal practices, and must use all available diplomatic, political and economic channels to pressure Israel to initiate a fulsome and transparent inquiry into the circumstances surrounding the massacre, which left 15 dead, and more than 1000 wounded.