You Are Here: Home → The Bipartisan Pandering to Israeli Interests

The Bipartisan Pandering to Israeli Interests 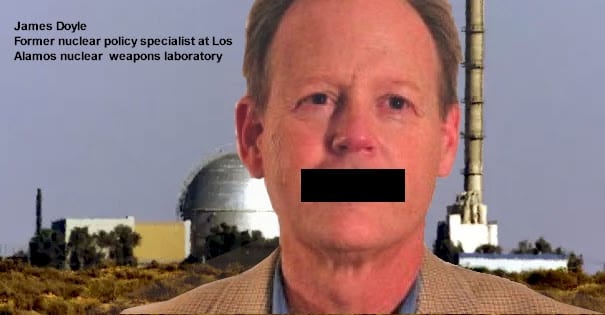 Former Los Alamos National Lab nuclear policy specialist James Doyle was fired after he mentioned Israel’s nuclear weapons in an article. Doyle’s crime was to break the “legislative rule” that no federal government employee can confirm that Israel has nuclear weapons. (Image from ANC Report)

Most Americans are certainly unaware of the many provisions benefitting Israeli and broader Jewish interests are inserted into U.S. government legislation and procedural guidelines……

…The State Department also has a Special Envoy to Identify and Combat Anti-Semitism, which “advances U.S. foreign policy on Anti-Semitism,” whatever that is supposed to mean, as combating anti-Semitism is not a foreign policy and would not appear to be a vital national interest of the United States.

[The position was put into place in 2004 and has been filled by Israel partisans ever since, one of whom adopted a new, Israel-centric definition of anti-Semitism. President Trump is being attacked for not yet appointing a new Anti-Semitism Envoy.]

The pandering to Jewish interests is widespread in the federal government and is bipartisan. Israel runs a large trade surplus with the United States because it has free access to the U.S. market and can also bid on government contracts, a privilege normally afforded only to NATO allies. Plus Washington foots the bill for more than 20% of Israeli defense spending, even allowing Israel to use American taxpayer provided dollars to buy weapons from its own defense industry, which competes with that of the U.S.

Indeed, in the past year there has been a virtual flood of legislation that has been favorable to Israel and some Jewish-related issues even though there is no actual interest in play for other Americans. On the contrary, much of the legislation actually denies to citizens and residents the Constitutional rights to free speech and freedom of association. The most recent legislation benefiting Israel and punishing Israel’s host of enemies was rolled into the omnibus spending bill that was signed into law on March 23rd. Israel received additional money for its “defense” while the Palestinians saw money going both to the Palestinian Authority as well as to the United Nations to help refugees in the Middle East cut dramatically.

Twenty-four states are now requiring statements pledging not to boycott Israel from those citizens and organizations that receive government funding or even seek local government employment. Two bills in Congress also seek to define as anti-Semitism any criticism of Israel. On December 12th 2017 the Anti-Semitism Awareness Act was approved by the House of Representatives with 402 affirmative votes and only two libertarian-leaning congressmen voting “no.” The Israel Anti-Boycott Act that is also currently making its way through the Congress would far exceed what is happening at the state level and would set a new standard for deference to Israeli interests on the part of the national government. It would criminalize any U.S. citizen “engaged in interstate or foreign commerce” who supports a boycott of Israel or who even goes about “requesting the furnishing of information” regarding it, with penalties enforced through amendments of two existing laws, the Export Administration Act of 1979 and the Export-Import Act of 1945, that include potential fines of between $250,000 and $1 million and up to 20 years in prison.

Accustomed as I am to learning about the latest Israeli tricks to gain additional money and other forms of support from the American taxpayer, I was recently shocked to read about a case in which a U.S. government employee was actually fired for revealing information that might embarrass the Jewish state. Grant Smith of the Institute for Research Middle Eastern Policy (IRMEP) is reporting how former Los Alamos National Lab nuclear policy specialist James Doyle was fired after he wrote in an article for the International Institute for Strategic Studies journal stating that “Nuclear weapons did not deter…Iraq from attacking Israel during the 1991 Gulf War.” The article had been cleared for publication but an unnamed congressional staffer spotted it and complained. A second review was made and “Doyle’s pay was cut, his home computer searched and he was fired.”

Doyle’s crime was to break the “legislative rule” that no federal government employee can confirm that Israel has nuclear weapons. The rule is ridiculous as the existence of the Israeli nuclear arsenal is well attested, including by Colin Powell, who confirmed that “Israel had over 200 nuclear weapons pointed at Iran.” Powell made the statement when he was out of office but even prominent Israel-firster Senator Chuck Schumer has confirmed the existence of the arsenal without consequence.

The reason for acute Israeli sensitivity on its nukes is the Symington Amendment in Section 101 of the U.S. Arms Export Control Act of 1976 which bans foreign aid to any country that has nuclear weapons and has not signed the Nuclear Non-Proliferation Treaty. Which means that Israel’s annual $3.1 billion in aid might be in jeopardy if Washington were to enforce its own laws, though one cannot imagine that President Donald Trump or the Attorney General will take the necessary steps to do so.

Another sticky bit of law consists of the so-called Leahy Amendments, which prohibit the U.S. Department of State and Department of Defense from providing military assistance to foreign security force units that violate human rights “with impunity.” Israel’s numerous brutal assaults on Gaza, including the current one in which it is shooting dead unarmed demonstrators, is a textbook case for when the Leahy Amendments should be applied, but, of course, they never will be. Even Senator Patrick Leahy, who sponsored the bill they are based on, has been silent when it comes to Israel, as is the entire United States government and the Zionist-dominated mainstream media.  (Read full article here.)

Philip Giraldi is president of the Council for the National Interest and a former CIA officer.