You Are Here: Home → Canadian doctor: Israeli soldiers shot me in both legs as I was treating injured protesters in Gaza

Canadian doctor: Israeli soldiers shot me in both legs as I was treating injured protesters in Gaza 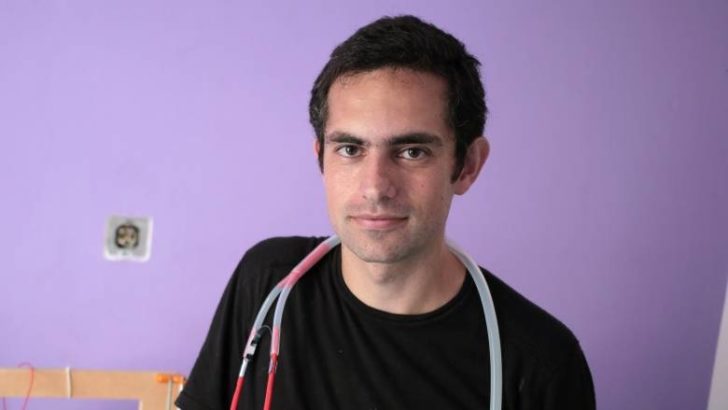 Dr. Tarek Loubani, a physician from London, Ont., was treating gunshot wound patients in Gaza when he became one himself. (Khalil Hamra/Associated Press)

Dr. Loubani, a Canadian physician, was in Gaza to treat the wounded in the Great March of Return – and to test a new 3-D printed tourniquet – when he was apparently targeted and shot in both legs. He is among at least 17 paramedics injured; one was killed.

On Monday May 14, while treating patients with gunshot wounds in Gaza during the Great March of Return, Canadian physician Tarek Loubani was shot in both legs by Israeli forces. One medic on his team, Musa Abuhassanin, was killed while attempting to providing care Palestinian protesters. Loubani published an account that noted he and the medical staff were wearing “high visibility clothing” and when they approached injured Palestinians, they did so with their hands raised as to show soldiers they were unarmed medical professionals.

After Loubani was wounded, Canadian Prime Minister Justin Trudeau called for an investigation and issued a statement, “We are appalled that Dr. Tarek Loubani, a Canadian citizen, is among the wounded – along with so many unarmed people, including civilians, members of the media, first responders, and children.”

Canada deplores and is gravely concerned by the violence in the Gaza Strip that has killed dozens and injured countless people, including a Canadian citizen. Full statement: https://t.co/n52DQDcBJp

A few days ago, I wrote about our first day of field trials for an open source 3D printed tourniquet in Gaza. The Glia team worked overtime to address and fix the problems we identified. Thanks to help from the 3D printing, engineering and open source communities, we got lots of feedback and felt that we were ready for today.

The only bit of good news in this report has to do with the tourniquets. We left the packaging issues to later (Failure #2), and instead focused on the mechanical issues we identified (Failures #3 and #4). We pulled all old models and tested buckles to see if they would break — we thought this issue was a low likelihood of recurrence, even though we will be testing alternative buckle designs later.

The tourniquets worked well. We recovered the 100 units given to Hayat Center for use in the field, giving us an inventory of 200 deployed units. One hundred units were distributed in the field today, and one hundred held in reserve for May 15. Seventy-eight (78) tourniquets were deployed to patients who met criteria. There were no failures of the device in any cases.

Failure #1 in our previous report was that “There are no ideal operating conditions.” This made optimizing the device important. We did that as much as we could.

The unspoken part of this is optimizing safety. To ensure the safety of first responders, we all dressed in clearly identifiable medical garb. Most paramedics wore fluorescent high visibility jackets. I wore a hospital green top and bottom so I could both be identified as medical staff and a physician.

Despite our efforts to clearly identify ourselves as first responders, several of our medical team were wounded by Israeli live fire. One paramedic, Musa Abuhassanin, was killed while attempting a victim rescue under fire. One hour before he was shot in the thorax and killed, Musa was one of my rescuers when I was shot by live ammunition. I sustained a moderate injury to my left leg and a minor one to the right leg. Musa was also the paramedic who discovered and reported the failed buckle in our previous report. He had a great laugh and was a good paramedic.

The photographer's name is Moumin Hmaid. He is a paramedic who always loved photography. Here is a photo of him with Paramedic Musa Abuhassanin, who was later killed. pic.twitter.com/gK0vh0nXeZ

Mohammed Migdad being treated in a medical field outpost. Gaza, May 14, 2018. Gunshot to right ankle pic.twitter.com/Y4CXb9BC8D

Anatomy of my gunshot wound

I am still collecting details of the shootings of Musa and other members of the medical team. In the meantime, I can contribute an account of my injury. The scene in eastern Gaza was bad since early morning. There was so much live fire that the first responder services stood outside the protest area and only approached when needed. In general, we approached with high visibility clothing and hands up until we arrived at the incident. We did not run to patients, but we definitely ran out. We did not attempt to tourniquet or treat patients on site.

I was shot toward the end of the morning, and we had already run out of our first supply of tourniquets. I had just resupplied with 8 units, one of them unpacked in my pocket. We were standing well away from the main protest area. The snipers in the three sniper outposts all had clear views of us.

There was no fire or smoke near us. We were standing still, and I was facing in a southerly direction talking to a colleague. The snipers were situated east of us. I was wearing visible full hospital greens. There was no active shooting from the Israelis immediately before or after. There were no protesters in our immediate vicinity.

I heard a loud bang and found myself on the ground. The bullet had entered my left proximal calf on the lateral side, exited on the medial side (moderate) and pierced my right knee superficial to the patella (minor). I yelled fuck.

The paramedics initiated treatment within 5 seconds, and asked me if I needed a tourniquet. The wound had about 100cc of blood lost on the scene, but didn’t look to be bleeding dangerously. I believe that I was shot with a regular bullet and not the exploding bullets that are causing severe injuries reported today and on other days. Knowing the shortage, I stopped the application of the tourniquet, and was instead given a pressure dressing. There was no live fire before or after my incident.

I was transported to hospital, stabilized and discharged after X-Rays showed no bony injury.

At the time of writing, there were 52 people killed and 2410 wounded during today’s peaceful Palestinian protests. 1,204 were struck by live ammunition. Seventeen (17) paramedics were wounded and one killed.

The tourniquets appear to be feature-complete and usable as is. We will continue to monitor and develop the tourniquets, especially thanks to the community support offered in improving the design.

However, it is clear that conditions remain suboptimal for tourniquet deployment by paramedics at this time. One possible solution is the wide deployment and routine training of the general Palestinian population in the use of tourniquets, such as in Basic Life Support (BLS) courses.

This post was originally published under the headline “3D printed tourniquet: Day 2 of Gaza field trials ends badly (May 14)” on Medium and is reposted here with permission.

Tarek Loubani is in Gaza testing 3D printed open source tourniquets. He’s blogged about how bringing low cost (around $7 per unit) 3D printed medical devices to Gaza can reduce the loss of life from injuries here.