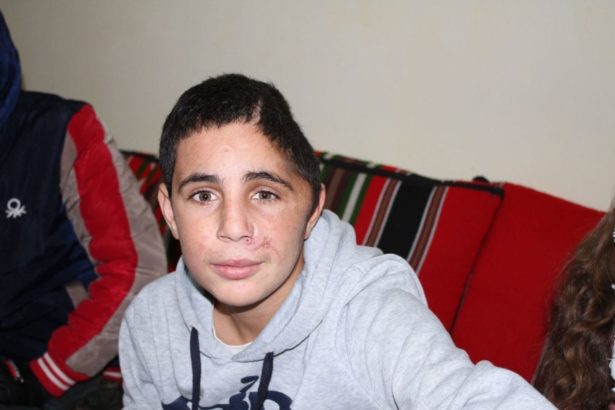 The preposterous tale of the Tamimi children continues: Mohammad, a minor who was shot in the face last December, has been detained for the 2nd time. The charge: stone-throwing (which carries a possible sentence of 10 years).

Mohammad’s entire village has been peacefully protesting for nearly a decade, resulting in constant surveillance and harassment by Israel.

As Mohammad Tamimi, 15, walked to the market near his home in the occupied West Bank village of Nabi Saleh Sunday morning, he passed by a new white Hyundai.

Two men he assumed to be Palestinians were standing outside the parked car, speaking fluent Arabic on their phones. Two more were sitting inside the car, which had a green license plate (vehicles belonging to Israeli citizens have yellow plates).

Mohammad did not think much about this scene.

When he got close the men jumped Mohammed. One bent the youth’s right arm behind his back and covered his mouth. Then two men threw Mohammad into the car and drove out of the village.

Fadel Tamimi, Mohammad’s father, only learned of this when Mohammad was released later that night at around 11 p.m.

When Mohammad missed Iftar – the evening meal when Muslim’s break their fast during the holy month of Ramadan — Fadel felt something was wrong.

“It’s not like Mohammad to just go missing like this,” he told Mondoweiss. “We got scared about what happened to him.”

There was no one on the streets at the time who witnessed the incident. The family was left in the dark regarding Mohammad’s whereabouts.

The family contacted the Israeli police and army, but they denied having detained the minor. The village then initiated a search campaign to find Mohammad.

Mohammad has been slowly recovering from a life-threatening injury he sustained five months ago, when Israeli forces shot him in the face with a rubber-coated steel bullet at close range during a protest of Donald Trump’s decision to move the US embassy to Jerusalem.

He was put under a 72-hour medically-induced coma at that time, before doctors were forced to remove a portion of his skull owing to severe inflammation in his brain.

Mohammad underwent another critical surgery less than a month ago, and doctors have since reinserted the pieces of skull.

“Everyone was so worried because Mohammad needs to take his medicine. He had missed one of his scheduled doses,” Manal Tamimi, Mohammad’s aunt and a prominent activist in the village, told Mondoweiss. “We thought maybe he had fallen and hurt himself.”

Israeli authorities finally contacted Mohammad’s family to inform them that the minor was being held for interrogations at Shaar Binyamin detention center in the occupied West Bank. He was released soon after.

‘Israel is waiting for him to get better’

After Mohammad was shot on December 15, 2017, his cousin Ahed Tamimi, then 16, confronted two armed Israeli soldiers, and proceeded to slap and kick them. After a video of the incident went viral, the teen was arrested and has since been sentenced to eight months in prison.

Ahed Tamimi, now 17, has risen to international prominence as a symbol of Palestinian resistance. While Nabi Saleh has often been targeted by Israeli forces owing to their near decade-long nonviolent protests, in recent months residents have reported a sharp rise in Israeli arrests and raids in the village.

An Israeli army spokesperson told Mondoweiss that Mohammad was detained after he “threw rocks at a road and endangered passing vehicles near Nabi Saleh.” The village is located directly adjacent to Israel’s illegal Halamish settlement, with a road dividing the two areas.

“They always say it’s about stones when they arrest us,” Fadel said, as he released a sigh connoting the repetitiveness of such allegations. Stone-throwing is the most common charged levied against Palestinian children, and holds a maximum penalty of 10 years in prison for Palestinians in the occupied West Bank.

In February, when Mohammad’s skull was still exposed from the initial operations, Israeli forces raided his home in the pre-dawn hours and detained the injured minor.

At the time, Mohammad told Mondoweiss that Israeli forces had “beaten” him into confessing that his injury was sustained from a bicycle accident, rather than from a rubber bullet shot by Israeli forces.

Manal says that she believes Israeli authorities are waiting until Mohammad is recovered so that they can imprison the teen.

“I think they were afraid to keep him in prison because of his condition,” Manal explained. “They want him in prison, but they are waiting for him to get better,” she continued. “They will try in the next two or three months to arrest him again.”

Mohammad’s father Fadel agreed, telling Mondoweiss that Israeli intelligence had even called one of the doctors who performed the initial surgeries on Mohammad and told him they would come to arrest Mohammad after he recovered.

Dawoud Yusef, advocacy coordinator for Palestinian prisoners’ rights group Addameer, told Mondoweiss that Israel’s tactic of forcing Palestinians into a constant rotation in and out of Israeli prisons is meant to “make the individual feel that they are never safe from the forces of the occupation.”

He noted that Israel’s use of Mista‘arvim–Israeli agents disguised as Palestinians–to detain the injured teen represents an “intensification of the psychological warfare being executed against the [Tamimi] family,” adding that the use of undercover agents is a “psychological tool more than anything else.”

However, Yusef commented that Israeli forces typically arrest Palestinians when they are injured, and rarely wait for them to recover before imprisoning them. He suggested that in the case of Mohammad, the Israeli authorities could be attempting to “avoid too much undue international attention” or continuing its suppression of political activities in the village.

‘We are scared to allow our children on the street’

At least 20 residents in Nabi Saleh have continued to be imprisoned by Israel since Ahed’s slap — which prompted a wave of arrests in the village. At least seven of the detained residents are minors. According to Addameer, 6,036 Palestinians were being held in Israeli prisons as of April.

Manal told Mondoweiss that Israel’s crackdown on the village was being taken to a “dangerous level.”

“We feel like anyone in the village can get kidnapped by the Israelis at any time,” she said. “We are scared to allow our children on the street.”

Israeli forces have employed inflatable surveillance balloons in Nabi Saleh that float above the village 24-hours a day, collecting intelligence on the Palestinians below, according to Manal.

“The Israelis know exactly where each village resident is at all times,” she said. “They know when we leave our houses. They know when we come back home. They are keeping tabs on every single thing that’s happening in the village.”

Yusef told Mondoweiss that because the Tamimi family and the village of Nabi Saleh have become a “symbol for peaceful organizing and resistance,” the continued arrest of Mohammad, and other residents in the village, are “messages” intended to intimidate the family.

“They represent explicit instructions to them that they should desist from their activity, and stop their activism,” he said. “The targeting of Mohammad in particular is an attempt at striking at the most vulnerable members.”

Jaclynn Ashly is a journalist based in Bethlehem, Palestine. You can find her on Twitter @jaclynnashly