You Are Here: Home → Bloomberg’s comments about the Arab world, Palestine exhibit ignorance 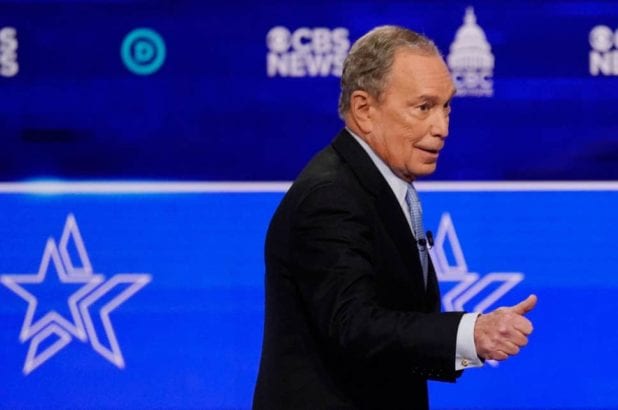 As Bernie Sanders said, we need to start being a little more honest about American foreign policy

by Ahmed Twaij reposted from the Independent

Dogged by a historical record of sexist remarks and racist policies, Mike Bloomberg once again exhibited his ignorant preconceptions of the Arab world during last night’s fiery Democratic debate in South Carolina.

When asked about the Israel-Palestine conflict by CBS correspondent Major Garrett, Bloomberg appeared to rely solely on the laziest stereotypes of the region. Smirking, the presidential candidate responded, “The battle has been going on for a long time in the Middle East, whether it’s the Arabs versus the Persians, the Shias versus the Sunnis, the Jews in Israel and the Palestinians. It’s only gone on for 40 or 50 years.”

This over-simplified analysis, which voids the US of any responsibility for conflict in the region, would not only lead to failed grades in high school history classes but also provides a worrying insight into how a President Bloomberg would conduct foreign policy.

To better understand the clashes Bloomberg was referring to, “it might be a good idea to be honest about American foreign policy,” as Senator Bernie Sanders proclaimed during the same debate. The “Arabs versus Persians” feud culminated in a disabling eight-year war between Iran and Iraq in the 1980s, which was fueled by US foreign policy as Saddam Hussein was chosen to be the US surrogate in the Persian Gulf.

The US continued to weaponize the Iraqi dictator, despite him deploying some of history’s worst chemical warfare against Iran. Ironically, through Ronald Reagan’s infamous scandal, the “Iran contra-affair”, the US also sold weapons to Ayatollah Khomeini’s Iran, perpetuating violence in the region.

Bloomberg, who has previously described the Islamic world as having “all of its chaos”, conflating the global religion with a region, neglected to mention the illegal and destructive invasion of Iraq by the US. The 2003 war directly contributed to the destabilization of the area and allowed for the spread of global terror through the formation of Isis.

Sectarian violence, or the “Sunni versus Shia” clashes Bloomberg referred to, came as a result of the collapse of Iraq’s security sector and the propagation of sectarian policies of an Iraqi government propped up by the US Coalition Provincial Authority. Prior to 2003, Sunni-Shia intermarriages were commonplace in Iraq. In fact, before the US occupation of Iraq, not a single car bomb had been detonated in Baghdad, a city which has now sadly become synonymous with violence.

Clashes between the “Jews in Israel and the Palestinians” were also mentioned by Bloomberg. This conflict has become increasingly one-sided as the US continues to contribute over $3.3 billion per year for Israeli military financing, despite the Israeli government repeatedly being accused of war crimes and flouting International law. Bloomberg referred to illegal Israeli settlements as “new communities” during the debate, further estranging Arabs from his campaign.

Having apologized for the racist “stop and frisk” scheme, Bloomberg has yet to apologize for the surveillance program of Muslims in New York when he was mayor. Little wonder, when his understanding of Muslims and Arabs is so unforgivably naive.

Through his self-funded multi-million dollar presidential campaign, Bloomberg has been trying to reach out to the large Arab American communities in Detroit by taking out ads in Arabic. Ironically, under Bloomberg’s New York, reading Arabic newspapers or speaking Arabic in public were justification enough to be profiled by the New York Police Department.

The Middle East is not the war-loving region Bloomberg has alluded to. Many of the conflicts in the region are deeply instilled in US foreign policy, and as Sanders rightly suggested, need to be addressed. Suggesting otherwise only alienates Arab-American voters further and cause a deeper divide between the Arab and Western worlds. To counter Trump’s ill-conceived, divisive policies, a candidate uniting America through a grassroots movement should be considered.

Ahmed Twaij is an independent Middle East analyst and an advisor to the Iraqi nongovernmental organization Sanad for Peacebuilding. He is also a photojournalist and has worked with a number of international humanitarian and human rights organizations.