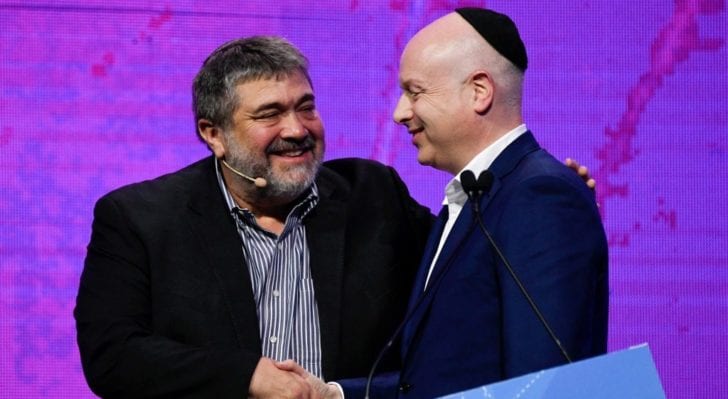 A roundup of diverse news items on the Israel lobby…

* “The Hebrew-speaking spokeswoman on the road with Mike Bloomberg. Whenever Michael Bloomberg heads out on the campaign trail, Galia Slayen is never far behind. The 29-year-old Jewish native of Oregon — and daughter of Israeli parents — joined the 2020 hopeful’s team last year as his traveling press secretary…… In 2017, she was hired as the communications director for the Illinois gubernatorial campaign of J.B. Pritzker, who defeated incumbent Republican Gov. Bruce Rauner in 2018…” –Jewish Insider

* “Former U.S. Middle East peace envoy Jason Greenblatt is joining OurCrowd, an Israeli crowdfunding and venture investment company, to build business ties with Arab countries — including ones that don’t have official relations with Israel. After spending nearly three years helping to develop President Donald Trump’s Israeli-Palestinian peace plan, Greenblatt stepped down from his White House position three months before its January release. His new job will leverage ties made in that position…..  Two countries he sees as a focus are the United Arab Emirates and Saudi Arabia.” –Bloomberg News

* “The House Homeland Security Subcommittee on Intelligence and Counterterrorism, chaired by Rep. Max Rose (D-NY), will hold a second hearing this afternoon about confronting the rise in antisemitism and domestic terrorism.” [Rose is an Israel partisan. Criticism of Israeli violations of Palestinian human rights is often labeled by Israel and its advocates as “antisemitism.”] –Jewish Insider

* “AIPAC announced on Tuesday evening that Democratic presidential contender Michael Bloomberg will speak at its annual policy conference next week. “Mike is pleased to join AIPAC 2020 to share his perspective on issues important to the Jewish community and America’s strong relationship with Israel,” a Bloomberg campaign spokesperson tells JI. At least two other presidential candidates are expected to announce later today that they’ll be addressing AIPAC via satellite.  –Jewish Insider

* “Israel’s foreign minister denounced Democratic front-runner Bernie Sanders on Wednesday for what he called his ‘horrifying comment’ about Jerusalem, saying that those who support Israel would not back Sanders’ presidential candidacy after such remarks. At a contentious Democratic debate on Tuesday night in South Carolina, Sanders labeled Israeli Prime Minister Benjamin Netanyahu a ‘reactionary racist’ and said he’d consider reversing President Donald Trump’s move of the U.S. Embassy from Tel Aviv to Jerusalem…. –AP News/Jerusalem

* They give to synagogues, to schools, to summer camps and to Zionist organizations…..  Now these two men [Mordechai Korf and Uriel Tzvi], who represent the pinnacle of generosity to many religious Jews in Florida, are among the the targets of a lawsuit stemming from a Ukrainian money-laundering scheme that calls into question the legitimacy of years of their philanthropic contributions…” –Forward

* ADL head Jonathan Greenblatt writes that a main reason parents send kids to Jewish schools is Israel: “Celebrating Israel is a vital part of Jewish education….. Many Jewish day schools celebrate the state of Israel and the Jewish connection — historically, religiously and emotionally — to the country. Together with the study of Torah… the Jewish historical and cultural connection to Israel is the main reason that parents send their children to such schools.” But, he claimed, this didn’t constitute “dual loyalty.”

He was responding to a previous Forward article by a teacher who had written of hearing teachers or administrators at Jewish schools say things like “you don’t belong in America,” “Israel is your country” and “the IDF are your soldiers”… HaTikvah was sung more often than the Pledge of Allegiance or the Star Spangled Banner. Israeli national holidays are taught with a reverence that outstrips what is accorded to religious or American ones… –Forward (reposted on IAK Blog)

* “Following Sen. Bernie Sanders’s decision to skip the AIPAC Policy Conference in March, a group of 347 rabbis has signed an open letter to the Democratic front-runner, saying they support AIPAC’s role in advancing the US-Israel relationship and reject his ‘outrageous comments.’ Sanders claimed on Saturday that the organization gives a platform ‘for leaders who express bigotry…….  The rabbis come from across the spectrum and include both male and female clergy…” [the list of rabbis is here] ‘” –Jerusalem Post

* “UK Chief Rabbi Ephraim Mirvis [often referred to as the spiritual leader of British Jewry] has been confirmed as a speaker at next week’s American-Israel Public Affairs Committee (Aipac) annual conference in Washington DC, America……  he openly warned that Jeremy Corbyn was “unfit for high office”… –JC

* “Jewish Chronicle to pay damages over anti-Semitism libel: The Jewish Chronicle on Thursday apologized to a Labour activist for libeling her over “anti-Semitism.” The UK newspaper admitted on its website it had published “allegations about Mrs Audrey White” which were “untrue.” It said it had agreed to pay White a sum in damages plus her legal costs… –Electronic Intifada

* “The manufactured campus antisemitism hysteria intensifies: Analysis of several recent incidents shows how factually-questionable or even provably-false reports are widely proliferated by a gullible media to manufacture a fictional campus antisemitism crisis…..  Most of these incidents were proven false and the rest are thoroughly implausible but conveniently impossible to disprove.

As a whole, they contribute to a general perception of hostile, potentially catastrophic campus antisemitism requiring authorities to step in to protect Jewish students from the dire threat to their physical well-being posed by Palestinian rights activities. These pseudo-events morph into a public consensus even if incident after incident is found not only to be false but maliciously planted… –Mondoweiss

“With many of these posts directly involved in overseeing the security of the upcoming 2020 election, ostensibly to combat “foreign interference,” these connections are even more significant. Some of the Israel lobby groups in question have not only engaged in illegal espionage against the U.S. government, but are also openly meddling in the current Democratic party primary…” –MintPress

* Former New York Times Jerusalem bureau chief (in charge of the Times’ reporting on Israel-Palstine) writes: “I’m going [to the AIPAC conference] because it’s the largest annual gathering of American Jews, a group that Sanders says he is proud to be part of. I’m going because it’s 18,000 people who care about a place I care about, a place Sanders lived for awhile on a kibbutz and says he — like me — wants to make better……  [AIPAC is] a bipartisan, mainstream group that is at the heart of many American Jews’ political identity…” –Forward