You Are Here: Home → Bernie vs AIPAC: As Sanders Surges, pro-Israel Democrats Scramble for Backup Plan 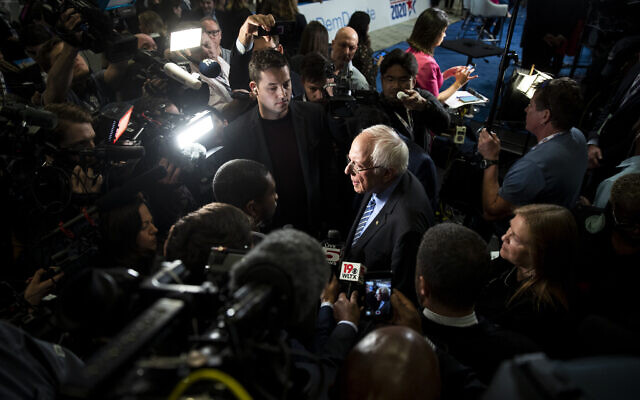 For many, taking aim at the pro-Israel lobby this week embodies what the Democratic front-runner stands for – and highlights why others are worried about him

For about a minute last week, it seemed like the traditionally pro-Israel moderates in the Democratic Party were coming to terms with the fact that their least favorite candidate, Senator Bernie Sanders, had all but locked down their party’s presidential nomination.

They appeared to be ceasing their attacks on Sanders in the name of party unity, and because alienating the presumptive nominee – who would be the first Jewish nominee by a major party in U.S. history – wasn’t a wise move.

But the cease-fire proved too fragile to hold.

Signs of a truce came late last week as caucus polls in Nevada anticipated the sweeping Sanders victory over the rest of the Democratic field. News broke that Mark Mellman, who heads the lobbying group Democratic Majority for Israel, told a gathering in New York that his organization was taking a step back from presidential politics. “We don’t have plans to be further involved in the presidential race – against Sanders or anyone else, for that matter,” he said.

Taken at face value, Mellman’s words pointed to a radical change in strategy. His Democratic Majority for Israel group had just spent over $1 million in negative ads in Iowa and Nevada casting doubt on Sanders’ electability and, controversially, invoking the senator’s heart attack last fall to suggest he was unfit to be president.

Mellman was personally vocal, sounding the alarm that a Sanders nomination spelled a “Democratic disaster.” Sanders was, he wrote in a fundraising email on the eve of the Iowa caucus, the candidate “we believe is least capable of winning in November and most likely to adopt a hostile attitude toward Israel.”

Despite those efforts, Sanders has surged in the polls.

And so last week, in the face of Sanders’ apparent near-inevitability as nominee, it seemed that Democratic Majority for Israel was refocusing on Congress, hoping to balance a possible Sanders White House with a House and Senate that could act as a bipartisan firewall against any attempts to leverage military and economic aid to influence Israeli policy toward the Palestinians.

When Haaretz contacted Democratic Majority for Israel this week, the group denied having backed away from involvement in the presidential race. Rather, it was just taking a break.

“Today we don’t have plans for specific ads in specific places,” Mellman told Haaretz. “Tomorrow or next week or next month, we could develop plans.”

If Sanders had been a more conventional politician, he might have seized the moment to defuse the group’s opposition to his candidacy. He had already offered an unexpectedly balanced answer when confronted earlier this month by an IfNotNow activist, who urged him to boycott the upcoming American Israel Public Affairs Committee policy conference.

“I have no objection to going,” Sanders responded while acknowledging that attending was not in his schedule. “The question is, what do I say when I get there? That’s the point.”

But Sanders didn’t miss the fact that AIPAC – the leading pro-Israel lobby in the United States – had purchased Facebook ads earlier this month that blamed “radicals in the Democratic Party” for “pushing their anti-Semitic and anti-Israel policies down the throats of the American people.” And it wasn’t difficult to figure out which candidate’s camp those “radicals” were part of.

And so, Sanders chose not to quietly stay away from the AIPAC policy conference or offer, as he did in 2019, to send a video greeting. Instead, on Sunday night, Sanders tweeted that he was “concerned about the platform AIPAC provides for leaders who express bigotry and oppose basic Palestinian rights. For that reason I will not attend their conference.”

The Israeli people have the right to live in peace and security. So do the Palestinian people. I remain concerned about the platform AIPAC provides for leaders who express bigotry and oppose basic Palestinian rights. For that reason I will not attend their conference. 1/2

Senator Sanders has never attended our conference and that is evident from his outrageous comment.

Democratic Majority for Israel also shot back, tweeting that Sanders seeks and accepts “support from bigots,” as well as “appoint[ing] bigots to official positions” and that he himself speaks “from platforms that spew bigotry.”

If the bigotry is from his supporters, or against Jews or the LGBTQ community, he’s unwilling to condemn it.

Jewish leaders and pundits from the liberal Zionist camp reacted with disappointment and dismay.

“At a time when we see a surge of real hate across the U.S., it’s irresponsible to describe AIPAC like this,” wrote Anti-Defamation League CEO Jonathan Greenblatt, calling Sanders’ characterization of AIPAC “offensive.”

It’s offensive that @BernieSanders denigrates the @AIPAC policy conference as a platform for bigotry. At a time when we see a surge of real hate across the US, it’s irresponsible to describe AIPAC like this. @ADL proudly will be there. https://t.co/MlK4SgYHfL

Jodi Rudoren, editor in chief of The Forward, opined: “I’m going to the American Israel Public Affairs Committee Policy Conference in Washington next week, and Senator Bernie Sanders should too. … Writing off AIPAC – a bipartisan, mainstream group that is at the heart of many American Jews’ political identity – as a bunch of bigots is not going to help restore respectful discourse in our public spheres.”

The back-and-forth quickly became so intense that the prospective landmark of Sanders becoming the Democrats’ first Jewish presidential nominee was “being overshadowed by his conflicts with America’s Jewish leaders and Israel’s leadership,” wrote David Nather on the Axios website. “It would be a historic moment if Sanders were nominated – but that milestone could be overlooked if he becomes defined by fights over his Israel policies.”

Sanders surrogates, supporters and fans who are deeply critical of Israel and supportive of the boycott, divestment and sanctions movement against Israel were thrilled by his bold decision to thumb his nose at AIPAC.

“For me and many other Israeli and American Jews on the left, Sanders is literally a hero for saying fuck you to AIPAC,” tweeted left-wing journalist Mairav Zonszein.

For me and many other Israeli and American Jews on the left, Sanders is literally a hero for saying fuck you to AIPAC. https://t.co/q5boRIBNCj

Choosing to do so was vintage Sanders. His anti-AIPAC tweet was practically a word-for-word replica of the explanation a campaign aide gave the media when the senator declined to appear at last year’s conference.

“Sen. Sanders has no plans to attend the AIPAC conference,” his policy director, Josh Orton, told the press in March 2019. “He’s concerned about the platform AIPAC is providing for leaders who have expressed bigotry and oppose a two-state solution.”

"@SenSanders has no plans to attend the AIPAC conference," his policy director Josh Orton just told me in an email. "He’s concerned about the platform AIPAC is providing for leaders who have expressed bigotry and oppose a two-state solution." https://t.co/A2sxAVwo8E

Just after the latest AIPAC kerfuffle hit, Sanders was similarly consistent when he defended his past support for the Cuban revolution during an interview on CBS’ “60 Minutes.” He argued that “it’s unfair to simply say everything is bad” about the late Cuban dictator Fidel Castro. This caused Cuban American and other Latino Democrats to complain that they felt “disgusted and insulted.”

In 48 hours, ⁦@BernieSanders⁩ said crap alienating 2 crucial voting blocs in FL, the biggest swing state. His comments against AIPAC and in favor of Castro, make it very hard for him to win FL + hurt down-ballot Dems.

Both statements were reflective of the ideological consistency that Sanders’ die-hard supporters love about him: The way in which he sticks to his guns, whether the issue is Cuba or Israel, refusing to pivot or soften his stance even slightly in order to curry favor with a constituency, no matter how helpful it might be in his pursuit of victory.

It is precisely this purity that is so deeply worrying to those committed to defeating President Donald Trump in November’s general election, and has them wondering if Sanders really is the right man for the job.

Allison Kaplan Sommer is a journalist at Haaretz and panelist on The Promised Podcast.