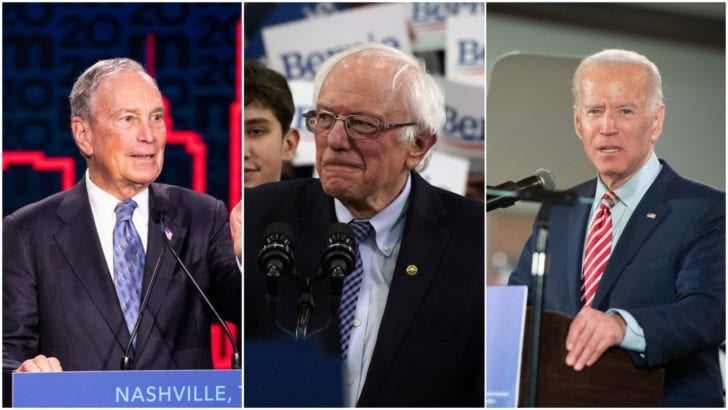 As voters go to the polls in 14 states, the Democratic establishment, often heavily influenced by Israel partisans, is trying to block a Sanders’ nomination. Israeli leaders and partisans worry that a Sanders win could eventually have “catastrophic” results for Israel.

Amy Klobuchar and Pete Buttigieg have now dropped out of the race and endorsed Joe Biden. (The inducements used to accomplish this are not yet known.) Meanwhile, billionaire Bloomberg, an Israel advocate, has also been lobbying superdelegates and is hoping for a brokered convention where he could win on a second ballot.

NBC News reports, “Unlike other top presidential candidates throughout history, Sanders has been openly critical of Israel and its leadership.” NBC notes that Sanders “has been increasingly pushing for a major overhaul to American foreign policy — including on Israel. That has many Israelis and pro-Israel Americans in both parties terrified.” The report continues:

“These fears are not unfounded. Unlike other top presidential candidates throughout history, Sanders has been openly critical of Israel and its leadership. At the most recent Democratic debate, he made a dramatic departure from American political orthodoxy by calling the Israeli prime minister a ‘reactionary racist.’ He made an equally unprecedented attack on the largest pro-Israel lobby and mainstay of Washington politics, AIPAC, which is holding its annual gathering Monday, by saying it provides a platform ‘for leaders who express bigotry and oppose basic Palestinian rights.’

“It’s not just rhetoric that has rattled many Jewish voters. Sanders has expressed a willingness to condition the major pillar of the U.S.-Israel alliance, the billions in military aid the U.S. gives Israel, on the country’s treatment of the Palestinians — though the United States also benefits from Israel serving as a counterweight to radicalism in the region and an important source of military, technology and intelligence cooperation and innovation. And while Sanders touts his Jewish heritage and time on an Israeli kibbutz to demonstrate his belief in the country’s right to exist, he also calls for a more balanced approach to the Palestinian conflict and frequently highlights their suffering. Unlike Trump, he is unlikely to tolerate any expansionist Israeli policies.

“Israeli leaders, not generally known for their subtlety, have been transparent about their fears. Foreign Minister Israel Katz of Netanyahu’s right-wing Likud party has said that ‘people who support Israel will not support’ Sanders. Parliamentarian Yair Lapid, who is running with Gantz’s centrist party, has said Sanders’ rise has him ‘very worried.’ Israel’s ambassador to the United Nations called him an ‘gnorant fool.’ More surprising has been the public alarms sounded by American Jews. In response to his criticism, AIPAC called the Vermont senator ‘shameful.’ The Democratic Majority for Israel, a pro-Israel PAC, has run attack ads against him [at least $800,000 worth].

“A wedge between the countries could be catastrophic for Israel, which relies heavily on the United States for both military assistance and diplomatic support; the U.S. is also Israel’s largest trading partner. In international forums, like the United Nations, the U.S. is often Israel’s lone defender from resolutions that seek to censure Israel and restrain its actions against terror groups such as Hamas and Hezbollah. The U.S. has also been critical in helping Israel counter the isolation of the growing Boycott, Divestment, Sanctions, or BDS, movement, and its shared desire to thwart Iran’s nuclear ambitions and regional terror have given Israel space to maneuver.”

Schneider noted that Biden’s first trip as a member of the Senate was to Israel. “He is a friend of Israel and has always worked with me in my efforts to support Israel. The day he takes office, he can say with credibility that he stands with Israel, stands with our allies, and the world will believe him because he has a track record on that.”

The Washington Post reports that Biden is “benefiting from the Democratic establishment’s desperation to stop Bernie Sanders from securing an insurmountable delegate lead on Super Tuesday. Former Texas congressman Beto O’Rourke, who dropped out in November, also endorsed Biden in Dallas, a few hours after former Senate majority leader Harry Reid announced his support in Nevada.”

While Biden has sometimes criticized Israel through the years, he has called himself a “Zionist,” defended Israel’s strangling blockade on Gaza, and in 1982, supported Israel’s ruthless invasion of Lebanon. According to former Israeli Prime Minister Menachem Begin, Biden “said that if someone from Canada were to infiltrate into the United States, and kill its citizens all of us (and thus he indicated a circle) would demand attacking them, and we wouldn’t pay attention as to whether men, women or children were killed.”

The Hill reports that AIPAC’s head promised at its national convention on Sunday “to ‘defeat’ political movements seen as threatening the relationship between the U.S. and Israel, a veiled attack against Democratic presidential candidate Sen. Bernie Sanders (I-Vt.).”

Israel’s Ha’aretz newspaper reported that AIPAC “had purchased Facebook ads earlier this month that blamed ‘radicals in the Democratic Party’ for ‘pushing their anti-Semitic and anti-Israel policies down the throats of the American people.’ And it wasn’t difficult to figure out which candidate’s camp those ‘radicals’ were part of.”

Another fervent Israel partisan, attorney Alan Dershowitz, recently said that if Bernie Sanders is elected Democratic Party candidate, it would “give impetus to the BDS movement.”

According to Israeli media, “He called Sanders the ‘Corbyn of the United States,’ adding that “the idea that the United States will be led by a Jewish Corbyn arouses horror. He’s a Jew, but only from his parents.'”

Dershowitz  said that if Sanders was elected he “will not vote for the Democratic party and will even campaign against it.”

Mike Bloomberg: half a billion dollars in ads

The other candidate for Israel, Mike Bloomberg, is the only one to appear in person at the recent AIPAC convention. He is hoping to obtain the Democratic nomination through a brokered convention. Bloomberg gave a rousing speech at AIPAC, blasting Sanders for criticizing AIPAC and for having “spent 30 years boycotting this event.”

Politico reported in February that Bloomberg had been “privately lobbying Democratic Party officials and donors allied with his moderate opponents to flip their allegiance to him — and block Bernie Sanders — in the event of a brokered national convention.”

Bloomberg spokeswoman Julie Wood told Politico, “We have an enormous apparatus that is constantly reaching out to all types of people for support.”

Politico reports that other candidates have also quietly been in contact for months with superdelegates. While these hand-picked delegates can’t vote on the first ballot, they could prevent a Sanders’ nomination if Sanders fails to win a majority and the convention goes to a second ballot.

But Bloomberg has something none of the others have – limitless funding from his $60 billion fortune.

“On the craps table of this campaign, there’s a $500 million chip sitting on ‘Super Tuesday.’ The bettor’s name is mike — small “m,” according to the visual design of his campaign, like he’s your modest neighbor from the split-level down the block instead of a titan of media and finance with estates in Bermuda and Southampton.

“That’s Bloomberg. Mayor of New York from 2002 to 2013. Democrat, then Republican, then independent, then Democrat. Purveyor of fancy data terminals. Ninth-richest person in the world. A few months ago Bloomberg saw a moribund field of candidates and thought he could vault his way to the nomination through a delegate grab on Super Tuesday.

“So now it’s mike, responsible presidential candidate, asking for the car keys as the nation stumbles around.”

The Post continues: “What’s a democracy worth? A year ago, before mike arrived on the scene, Bloomberg pledged a half billion to vanquishing Trump.”

“Now, mike is in your Facebook feed,” the Post continues. “He’s in your Google search results. Every time you glance at the television, he’s there. The 2020 presidential candidates have spent $26 million on TV ads in Texas alone; 80 percent of that was for mike, according to Advertising Analytics. One ad cost $4.3 million all by itself.”

Another Post article reports: “Fox’s Bret Baier pressed Bloomberg to name states where he might actually win the primary. ‘Well, keep in mind you don’t have to win states, you have to win delegates,’ Bloomberg replied. “The most likely scenario for the Democratic Party is that nobody has a majority, and then it goes to a convention, where there’s horse-trading and everybody decides to compromise. It doesn’t even have to be one of the two leading candidates.

“’The Sanders people would say they’re trying to steal it,” Baier noted.

Sanders, in speaking to J Street last fall, repeatedly said that the $3.8 billion in aid the US gives to Israel should be used as leverage to “fundamentally change” the country’s approach toward Palestinian land and rights.

“It is a lot of money, and we cannot give carte blanche to the Israeli government, or for that matter to any government at all,” Sanders said. “I would say that some of the $3.8 billion should go right now to humanitarian aid in Gaza.”

While Sanders continues to insist he is not anti-Israel, noting he lived there for awhile, he has increasingly spoken out against Netanyahu and in support of Palestinians. He has aligned himself with pro-Palestinian activists such as Linda Sarsour, and a chief foreign policy advisor is Matt Duss, a longtime human rights advocate.

On Saturday Sanders campaigned with Minnesota Congress member Ilhan Omar, calling her “one of the greatest people I know.” (Rashida Tlaib also endorsed him.)

Omar said: “We are going to win because we are building a movement that is multiracial, multi-generational, multi-ethnic, multi-religious….. We are motivated. And we are mobilized. And we are activated to create a different tomorrow.’

Sander’s support for Palestinians resonates with a growing number of Americans, particularly progressive Democrats, as recent surveys show that an increasing number support Palestine over Israel. A poll a few years ago found that 60 percent of Americans feel that Israel gets too much US tax money. The US currently gives Israel over $10 million per day, and this is slated to go even higher.

And a recent poll indicated that 57 percent of Democrats are ready to support “economic sanctions” against Israel to stop Israel from confiscating more Palestinian land.

The Associated Press reports that “Biden’s new backers feature a who’s who of current and former Democratic officials across the nation,” but does not yet include former President Barack Obama.

Sanders and the Jewish Vote: How the senator from Vermont is testing the pro-Israel establishment

How do Bernie & Buttigieg stand on Israel-Palestine?

Where’s the outrage over Netanyahu trying to interfere in the US election?