You Are Here: Home → Birthrighter Asks: Why Do People Care More About Adelson’s Money Than The Lives Of Palestinians? 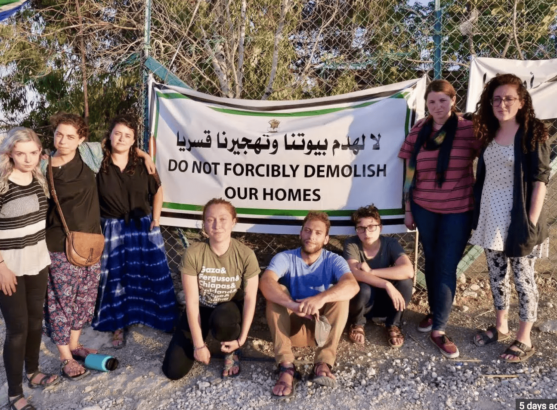 Eight Birthright tour attendees who left their group are pictured visiting a West Bank Bedouin community where residents are fighting to stop the Israeli government from demolishing their homes. class=”credit”>RISA NAGEL AND BECKY WASSERMAN

Birthright, arguably the most influential Jewish educator of American Jews, sends 50,000 young Jews to Israel on “apolitical” tours that deny them access to the truth about the occupation. A recent slew of public walk-outs from these trips have resulted lawsuit threats.

Birthright leaders know that if masses of Jews actually see the reality of Israel’s military rule over millions of Palestinians for themselves, they will not only be unable to support it — they will also join the growing movement to end the occupation.

Over the past three weeks, 13 Birthright participants decided to walk off their Birthright trips, causing quite a stir.

The walk-offs happened on three different trips, but all for the same reason. After repeatedly asking questions about the material they were being presented and then receiving whitewashed answers about Israel’s military rule over Palestinians, or being denied the opportunity to hear from Palestinians, the participants realized that Birthright was not going to provide them the education they needed to learn about this region with integrity.

So they walked off.

Since its founding in 1999, Birthright has sent over 650,000 Jews from across the world to Israel. Birthright is more than just a household name in the Jewish community — it is also one of the most well-known Jewish organizations in the U.S. among non-Jews. It is a leader in engaging unaffiliated Jews in the U.S. and therefore it has become a primary way that thousands of Jews explore their Jewish identity.

And, for thousands of American Jews, it is often their only direct experience with what’s happening on the ground in Israel/Palestine.

That positions Birthright with a whole lot of responsibility. Birthright is arguably the largest and most influential Jewish educator of American Jews.

So what kind of education are hundreds of thousands of American Jews receiving? Birthright consistently claims to be apolitical, but it doesn’t take long to figure out that’s not true.

The participants who walked off Sunday did so right before their trip was taking them to Elad’s Davidson Center, right next to the City of David. Elad is a radical settler organization that, along with the Jewish National Fund, actively works to “Judaize Jerusalem” by pushing Palestinians out of their homes.

The reality is that each year, 50,000 Jews go to Israel on tours that Birthright claims are apolitical. Meanwhile, these trips take them to sites like the City of David — which abuses archeology to dispossess Palestinians from their land. The trips also give out maps without the Green Line that label the West Bank as Judea and Samaria and invites professional Hasbara speakers to give the only official presentation on “politics.”

To take generation after generation of young Jews to Israel and either ignore the occupation or support it through organizations like Elad is not just political — it is deeply immoral.

Diaspora Jews are waking up to this reality and they are demanding the truth, especially after a spring in which over 100 Palestinian protesters in Gaza were killed by Israeli snipers. When Birthright denies them the truth, no one should be surprised that they are leaving their trips.

These walk-offs have elicited many reactions, some even going so far as to call the participants “entitled brats” who are “stealing” from Birthright.

This conversation has been perplexing to me, a young Jew and future Rabbi. Much of the institutional Jewish world is set up with programs that exist purely for young Jews to participate in for free. But the slurs being hurled at these participants who had the courage to speak out expose that young people in our community are only “entitled” to participate if they shut their eyes and their mouths and don’t dare voice any dissent.

It’s astounding that the loudest voices in our community are more concerned about the money coming out of mega-billionaire Sheldon Adelson’s pocket than the fact that one of the most influential institutions in our community is actively lying to hundreds of thousands of young Jews, or the land theft that the Israeli government is committing in Palestinian communities like Khan al Ahmar.

But our community isn’t fixated on those people right now. It is talking about the young Jews that have decided to take a public stance, those Jews who care enough to speak out even when it makes people uncomfortable. Our community is talking about them because it knows that opposition to the 51 years of Israeli occupation is not going anywhere, and it is worried that things will have to change.

Too many in our community have no problem signing young Jews up for Birthright with the goal of making Jewish babies and defending Israel at all costs. But if these Jews dare say that their Jewish identity and their vision for the Jewish future necessitates acknowledging Palestinian experiences and pain — and then take action based on those beliefs — the Jewish establishment of our community rejects them outright.

Now, Birthright has threatened to sue young Jews for publicly walking off their trips. They cannot handle 13 young people visiting Israel stating the obvious: that something is not right here and we won’t be quiet about it. They cannot handle that, as IfNotNow’s new campaign puts it, Birthright is #NotJustAFreeTrip, and that young people would rather work to show the true colors of the trip than shut up and take the Israeli government’s “gift.”

The Jews in my generation have grown up only knowing an Israeli government that denies the rights of millions of Palestinians, actively kicks Palestinians out of their homes, restricts their water access, passes racist legislation such as the Nation-State Law and passes laws to silence dissent to these practices. And the American Jewish establishment either ignores or actively supports all of it.

In this context, it is naive for us to believe that a trip that brings tens of thousands of Jewish youth to Israel and doesn’t meaningfully engage with the realities of the occupation can be anything but a tool in the Netanyahu government’s goal to whitewash its abuses and recruit unknowing defenders to its unjust cause.

We are living in a time in which, across the world, my generation is standing up to anti-democratic and oppressive policies. And that’s why people are so quick to call those who walked off their Birthright trips brats: They know that if masses of Jews actually see the reality of Israel’s military rule over millions of Palestinians for themselves, they will not only be unable to support it — they will also join the growing movement to end the occupation. So instead they use disparaging, condescending terms to attempt to dismiss and delegitimize them outright.

My hope is that more young Jews are inspired enough to take similar action to disrupt the silence of our community, as the Birthright walk-offs did. Because for the sake of the Jewish future, we need them.

Sarah Brammer-Shlay is a member of IfNotNow and rabbinical student at the Reconstructionist Rabbinical College.