You Are Here: Home → At Least Three Wounded in Stabbing Attack in West Bank Settlement 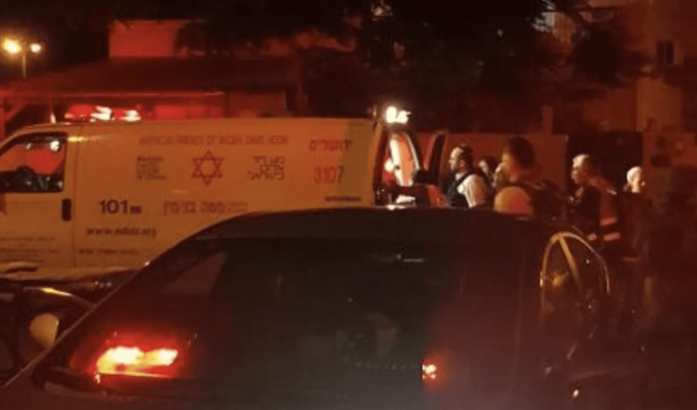 The scene of a suspected stabbing attack in the West Bank settlement of Geva Binyamin, July 26, 2018. Credit: MDA Spokesperson

A stabbing attack took place a short time ago in the illegal West Bank settlement of Geva Binyamin. 1 Israeli man is in critical condition, 1 in serious condition, and 1 was lightly wounded. The assailant, a 17-year-old Palestinian man, was killed at the scene.

At least three people were wounded in a stabbing attack in the West Bank settlement of Geva Binyamin on Thursday evening.

A 50-year-old man with stab wounds to the upper body is in critical condition and is being transferred to a hospital, emergency responders said. A 30-year-old man who was seriously wounded remains in stable condition, while a third victim with light wounds was treated at the scene.

The assailant broke into the settlement before being killed at the scene of the attack by a civilian, the Israeli military said, adding that forces are combing the area.

Despite Hamas’ attempts to carry out attacks and build up infrastructure in the West Bank, there has been relative calm in the area over the past year, in contrast to the situation on the Israel-Gaza border.

No exceptional incidents have occurred over the past few months – even as violent protests erupted on the Israel-Gaza border on Nakba Day and during the U.S. Embassy dedication in Jerusalem. Israeli defense officials have maintained security coordination with the Palestinian Authority.

[Editor’s note: “Relative calm” and “No exceptional incidents have occurred over the past few months” refers to the uninterrupted series of kidnappings, detentions, home demolitions, checkpoints, and other abuses by Israeli forces in the West Bank. See “An Ordinary Week in the Occupied Palestinian Territories.”]