You Are Here: Home → Anti-Zionism and anti-Semitism in British politics

Anti-Zionism and anti-Semitism in British politics 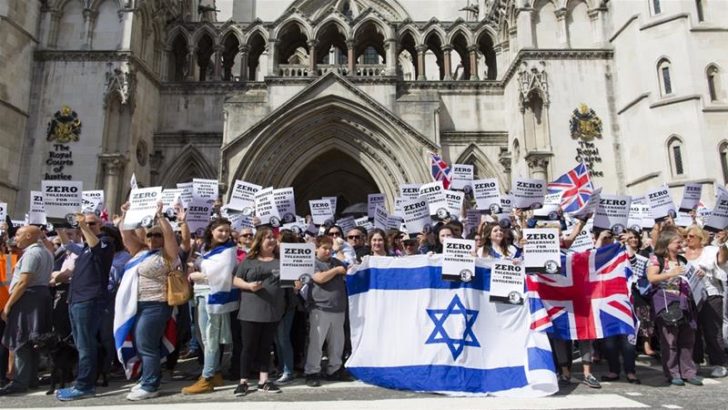 Anti-Zionism is deliberately conflated with anti-Semitism to suppress legitimate criticisms of Israeli policies. Avi Shlaim, an Israeli citizen, is an emeritus professor of international relations at Oxford University. Originally published by Al Jazeera.

There is no denying that from time to time anti-Semitism raises its ugly head in the UK, as it does in many other countries.

What is striking, however, about contemporary Britain is the use of anti-Semitism as a political tool to silence legitimate criticism of the policies and practices of the Israeli government and the collusion of members of the political establishment in this process.

A word on definitions is in order.

The Jewish philosopher Isaiah Berlin defined an anti-Semite as someone who hates Jews more than is strictly necessary.

This definition has its humorous side but it does not take us very far. A simpler definition of an anti-Semite is someone who hates Jews as Jews.

An anti-Zionist, on the other hand, is someone who opposes Israel as an exclusively Jewish state or challenges the Zionist colonial project on the West Bank.

Israeli propagandists deliberately, yes deliberately, conflate anti-Zionism with anti-Semitism in order to discredit, bully, and muzzle critics of Israel; in order to suppress free speech; and in order to divert attention from the real issues: Israeli colonialism, Israel’s apartheid, its systematic violation of the human rights of Palestinians, and its denial of their right to independence and statehood. The propagandists persistently present an anti-racist movement (anti-Zionism) as a racist one (anti-Semitism).

In British politics there is a striking disconnect between the public which is largely pro-Palestinian and the political elite which is overwhelmingly pro-Israeli.

Our last four prime ministers have all been proud partisans of the state of Israel. Tony Blair and Gordon Brown were honorary patrons of the Jewish National Fund UK, a body which, as its name indicates, caters exclusively for the Jewish and not the Arab citizens of the state of Israel. So was David Cameron until he decided to resign. Theresa May, the current prime minister, is one of the most pro-Israeli leaders in Europe.

WATCH: Episode 1 of “The Lobby” – Young Friends of Israel

In a recent speech she hailed Israel as “a remarkable country” and “a beacon of tolerance”. Rubbing salt in Palestinian wounds, she called the Balfour Declaration “one of the most important letters in history”.

Large segments of the British public, motivated by the traditional British values of fair play and sympathy for the underdog, increasingly side with the Palestinians.

WATCH: Episode 2 of “The Lobby” – The training session

Media reports of Israeli land confiscations, house demolitions, the siege of Gaza, and settler violence on the West Bank all reinforce this sympathy for the victims and provoke anger against the oppressor.

Indeed, the failure of western governments to protect the Palestinians against these never-ending Israeli depredations goes a long way to explain the growing activism at the level of civil society.

The clearest manifestation of this anger with Israel is Boycott, Divestment, Sanctions (BDS), the global grassroots movement whose goals are to end Israel’s occupation of all Arab lands, to ensure full equality for the Palestinian citizens of Israel, and allow Palestinian refugees to return to their homes. BDS is thus a response to Israel’s denial of Palestinian rights. The movement holds the moral high ground because its goals are grounded in international law and its methods are non-violent.

The success of BDS in mobilising support against the occupation is viewed with alarm by Israel’s leaders. They see it as part of a broader international campaign to delegitimise not just the occupation but the state of Israel itself. Their response to BDS is not to engage with its arguments but to tag it as shorthand for Jew-hatred.

In June 2015, the Israeli government set up a special task force with a budget of around $25.5m to fight the movement worldwide. The worse Israel behaves, the more aggressive are its efforts to disqualify and discredit anyone who holds her to account.

In Britain the majority of Israel’s opponents are on the left of the political spectrum.

In the past year the Labour Party became the main target of attack for allegedly harbouring a large number of anti-Semites within its ranks.

These attacks originated with what might be loosely termed “the Israel Lobby”. This lobby consists of the Israeli embassy in London, the Board of Deputies of British Jews, and other bodies such as the Community Security Trust and BICOM, the Britain Israel Communications and Research Centre.

It is unlikely to be a coincidence that the charges of anti-Semitism began to be levelled at the Labour Party soon after the election of Jeremy Corbyn as leader. For Jeremy Corbyn is the first leader of a major British political party to make an unqualified stand in support of Palestinian rights and Palestinian statehood. He is also opposed to the sale of arms to Israel.

Corbyn’s Jewish detractors did not directly accuse him of anti-Semitism because they could not find even the flimsiest evidence to substantiate such a charge. Corbyn has been in public life for a third of a century and he has a consistent and an entirely commendable record of opposing all forms of racism, including anti-Semitism.

The detractors, with the extensive research facilities at their disposal, probably went through Corbyn’s speeches of the past three decades with a fine-tooth comb but found no incriminating evidence. So they resorted to the old ploy of guilt by association: to smears and innuendos that he consorted with Jew-haters and Holocaust deniers and that he shared platforms with them.

The other “evidence” produced by the detractors was an offensive cartoon posted on Facebook by Naz Shah, the Labour MP for Bradford West, and a bizarre claim by Ken Livingstone, the former London mayor and long-time Palestinian rights campaigner, that Hitler supported Zionism in 1932 “before he went mad and killed six million Jews”.

In truth, the crisis in the Labour Party was not primarily about anti-Semitism. It was part of a broader effort by a group of disgruntled Blairites and their allies outside the party to overthrow Jeremy Corbyn and to reverse his progressive policies.

Yet Corbyn was sufficiently rattled by the furore in the media to appoint an independent inquiry. Although the report concluded that there is no endemic anti-Semitism within the Labour Party, the witch-hunt continued.

In truth, the crisis in the Labour Party was not primarily about anti-Semitism. It was part of a broader effort by a group of disgruntled Blairites and their allies outside the party to overthrow Jeremy Corbyn and to reverse his progressive policies. In short, the crisis was manufactured to serve the ends of a right-wing faction within the Labour Party as well as those of the Israel lobby.

This is the broader context in which Al Jazeera’s four-part series on “The Lobby” should be viewed. It is a remarkable piece of investigative journalism, packed with concrete evidence of murky manipulations by Israel’s envoys and friends in Britain to empower its supporters and undermine its critics.

“The Lobby” not only alleges but documents covert operations by the Israeli embassy and improper interference at every level of British politics. It exposes the way in which the Israeli embassy “infiltrated” both the Conservative and the Labour parties in flagrant violation of diplomatic protocol.

The most shocking revelation is that Shai Masot, a senior political officer at the Israeli embassy, set up a number of political organisations in the UK that operated as though entirely independent. He was also secretly caught on camera plotting to “take down” MPs he regarded as hostile to Israel. Among the MPs that Masot wanted to “take down” was Sir Alan Duncan, the foreign office minister and vocal supporter of a Palestinian state.

Mark Regev, the Israeli ambassador, made a full apology to Sir Alan for the incident and stated that Masot will soon be sent back to Jerusalem. Regev had little choice but to apologise: Al Jazeera produced the smoking gun.

Before being posted to London, Regev had served for eight years as chief spokesman for Prime Minister Benjamin Netanyahu. Regev is essentially a PR man and a notoriously pugnacious one. He personifies his master’s mantra that the best defence is offense.

The British government seemed satisfied with the apology and declared the matter closed. But a number of MPs from all parties have expressed their concern over this gross interference in British democracy and called on the prime minister to launch a public inquiry.

It is a fair guess that despite the recent setback, the Israeli embassy under Mark Regev’s leadership will continue its campaign of targeted political attacks and that in its Hasbara – a polite Hebrew word for propaganda – it will continue to equate legitimate criticism of Israeli policies with visceral hatred of the Jewish people.

But in the long run, Israel and its envoys abroad have no chance of winning the battle for hearts and minds for the simple reason that Zionism itself has already ended up on the wrong side of history.

Avi Shlaim is an emeritus professor of international relations at Oxford University and the author of The Iron Wall: Israel and the Arab World. Originally published by Al Jazeera.