You Are Here: Home → ADL trying to exploit movement for ‘socially conscious investment’ 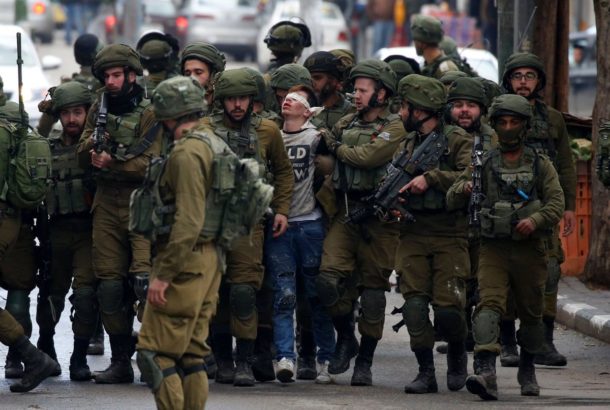 Over 20 armed Israeli soldiers arrest a 16-year-old Palestinian boy they said had thrown stones at them. Afterward, the boy said the soldiers had beaten him with a rifle and had bruises all over his body. Israel prevented him from traveling abroad for medical treatment. (photo)

ADL head says Jewish community should use its power, as with the cancellation of Kanye West, despite what some consider an unfair double standard

The ADL’s chutzpah is only outdone by the nonprofit itself, JLens, which claims to represent “values-based impact investing,” while promoting investment in a country with a long, documented history of human rights abuses.

Socially conscious investment, also known as impact investment, is an investment strategy that uses money and investment capital to bring about positive social results. The boycott against South Africa was an example.

Today, many social justice groups are urging a similar boycott of Israel over its ongoing human rights abuses and apartheid-like system. The facts have been documented by a wide variety of respected organizations, including the Red Cross, Christian Aid, Human Rights Watch, Amnesty International, Save The Children, Physicians for Human Rights, World Health Organization, National Lawyers Guild, U.S. State Department, and Foreign Service Journal, as well as Israeli and Palestinian human rights groups.

It is this boycott movement, often known as BDS, that concerns the ADL and JLens.

As the Jewish Forward reports: “The Anti-Defamation League is acquiring JLens Investor Network, a nonprofit that offers socially conscious investment funds for Jewish organizations, to prevent concerns over Israeli human rights abuses from curtailing investments in the country.”

While the ADL is largely known for its opposition to alleged antisemitism*, number two on its list of values (and possibly its top priority) is advocacy for Israel.

The ADL press release announcing its acquisition of JLens focused on the organization’s ability to fight any investment decisions that would have a detrimental impact on Israel, stating:

JLens has built relationships with more than 300 public companies and collaborates with other impact investors on shared values. As part of JLens’ work on a range of Jewish social and environmental values, the organization encourages companies to expand their economic ties with Israel and actively counteracts the BDS campaign.

JLens manages nearly $200 million in assets of Jewish foundations and philanthropists. One of its six “pillars” of focus is “support for Israel.” JLens’ founding director has said that the organization’s “priority is ensuring that companies invest in Israel.”

The Forward reports that author Scott Shay, chairman of Signature Bank who has represented the Jewish Federation of New York against BDS, endorsed the move:

“Shay said that the Jewish community should embrace values-based investments so long as it doesn’t hurt Israel.”

ADL head: Jewish community should use its power

While discussing Jewish economic power is frequently termed an ‘antisemitic trope,’ ADL head Jonathan Greenblatt openly suggested that the Jewish community should deploy its financial power to attain its objectives, announcing in its press release:

“It’s time for the Jewish community to take a seat at the table to use our power as institutional investors to ensure corporations are aligned with our values.”

In the press release, Greenblatt praised “the many companies that recently cut ties with Kanye West after his antisemitic tirades” as an example of how to use financial pressure to take down targets. West’s rambling and often unclear comments have been particularly condemned for his use of the phrase “the Jews,” an inaccurate generalization, rather than using Greenblatt’s generalization, “the Jewish community,” which apparently is permissible.

While a long list of corporations complied with the demand to cancel West, a few commentators criticized the companies for applying an alleged double standard, in which antisemitic wording is punished with massive harshness, while other offenses and individuals are given a pass.

Pasternak (who is Jewish and for awhile had worked with the Canadian military) texted West that if he didn’t change his behavior, Pasternak would commit him “again” (acknowledging that Pasternak was responsible for West’s 2016 institutionalization), where West would then be pumped full of drugs:

“Second option, I have you institutionalized again where they medicate the crap out of you, and you go back to Zombieland forever. Play date with the kids just won’t be the same.”

None of Pasternak’s many celebrity clients appear to have cut ties with Pasternak despite his threat to abuse his power in a particularly chilling manner. As one person tweeted;

“where is the outrage” about “threatening a Black-America man’s freedom with literal physical and mental enslavement through false imprisonment and forced drugging.”

While the ADL claims that it battles “bigotry wherever and whenever it happens” and works “to secure justice and fair treatment to all,” it said nothing about Pasternak’s horrific threat against an African American individual.

The ADL-JLens initiative could potentially draw on enormous financial support, as exemplified by a similar project to support Israel financially.

In 2020 the Jewish Federations of North America and the Jewish Future Pledge partnered on a project urging all Jews to bequeath fifty percent of their estate charitable giving “to support Jewish people or the State of Israel.”

As of November 2022, over 10,300 people had pledged, and organizers predicted the project would raise $600 billion in the coming years.

Pew reports that the Jewish Americans compose the wealthiest religious group in the United State, and the ADL itself has assets of over $221 million.

Journalist JJ Goldberg, in his book Jewish Power, reported some years ago that half the billionaires in the U.S. were jewish (Jews compose 2.4 percent of the U.S. adult population). A number of these billionaires – such as the Adelsons, Haim Saban, Michael Bloomberg, Sam Bankman-Fried (no longer a billionaire), Paul Singer, Larry Ellison, Norman Braman, Seth Klarman, Michael Steinhardt, Ron Lauder, etc – use some of their gargantuan wealth to support Israel.

The Washington Report on Middle East Affairs quotes former AIPAC insider M.J. Rosenberg: “AIPAC uses the resources of wealthy people in the American Jewish community to enforce a kind of political orthodoxy on Congress, on the White House and on the media”‘ to ensure that “no one in a position of power deviates from the Israel line.”

However, it’s not assured that such projects for Israel will ultimately succeed. While hundreds of Jewish organizations and the jewish establishment support Israel, there is growing dissent from many Jewish Americans. A 2020 Pew survey found:

“Fewer than half of U.S. Jews give Israeli Prime Minister Benjamin Netanyahu ‘excellent’ or ‘good’ ratings for his leadership. And just one-in-three say they think the Israeli government is making a sincere effort toward achieving peace with the Palestinians.

Similarly, in 2021 a quarter of Jewish voters polled by the Jewish Electorate Institute said they believed Israel is an apartheid state. This number rose to 38% for voters under 40.

As the Forward points out:

“Mainstream Jewish institutions are facing a jarring reality: their constituency includes a significant minority that does not share the the establishment’s views on Israel.”

The ADL’s effort to pervert socially conscious investing may end up being an uphill battle. As an Israel lobbyist has observed, “A lobby is like a night flower: it thrives in the dark and dies in the sun.”

In the past few years, more and more sun has has been shining on Israel and its numerous false claims of ‘antisemitism.’

The ADL’s massive resources may not be able to shield Israel forever from the bright glare of sunlight that principled people from diverse backgrounds are shining on it.

Even one of its most favored tactics, calling supporters of Palestinian human rights “antisemitic,” is being exposed as a cynical, fraudulent claim. In the end, Jewish Americans – and others – may no longer be fooled by the ADL.

*An international initiative has worked to replace the traditional definition of antisemitism with a new, Israel-centric version.

Alison Weir is executive director of If Americans Knew, president of the Council for the National Interest, and author of Against Our Better Judgment: The Hidden History of How the U.S. Was Used to Create Israel.  (A few additional links and facts have been added to the original post.)