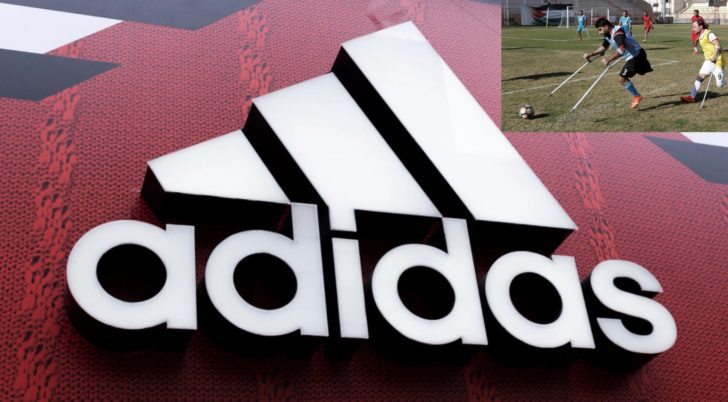 Following a recent antisemitism kerfuffle at Adidas, the Anti-Defamation League (ADL) will be spending over $1 million of Adidas' money to create ADL's idea of anti-bias training for athletes. (Pictured: the Adidas logo is pictured on a building in Manchester, England, July 14, 2022; inset: Palestinian amputees in Gaza, who recently created a national soccer team, practice. ) (IAK)

Adidas just pledged over $1 million to the ADL for the organization to create “a new anti-bigotry curriculum for student athletes,” despite the ADL’s history of support for discrimination and human rights violations.

Adidas previously partnered with Israel, and was pressured to walk away over Israel’s systemic human rights abuses. It’s time for Adidas to walk away again…

Adidas recently pledged over $1 million to the ADL, enabling the organization to create “a new anti-bigotry curriculum for student athletes…and to more widely disseminate its educational efforts.” This is deeply ironic, given that the ADL has a long history of bigotry and support for discrimination.

ADL is a self-proclaimed “worldwide leader in anti-bias education” and “a relentless advocate for vulnerable communities of all kinds.” It claims a reputation for “unquestioned credibility.”

While this may sound like a worthy institution with a noble cause, ADL has for decades generated programs and curricula tainted with bigotry. And while the organization has faced criticism, it has remained steadfast in its intolerance of certain groups.

Adidas, on the other hand, has proven itself capable of course-correction.

Adidas has had at least two run-ins with customers over its sponsorship of Israeli sports. Each time, it eventually did the right thing.

Adidas says it is “committed to living our values” culture of doing things right.

In 2018, the international BDS (Boycott, Divest, and Sanction) movement organized a campaign to boycott Adidas to highlight its complicity with Israel’s human rights abuses – particularly the fact that at least six Israeli soccer teams in the IFA are based in illegal Israeli settlements on Palestinian land. Israel’s settlement policy amounts to a war crime under international law.

130 Palestinian sports clubs signed an open letter to the CEO of Adidas, accusing the company of whitewashing human rights abuses and war crimes.

Among the signatories to the letter was the Jenin Athletic Club, which was founded in 1940, making it older than the state of Israel itself.

The campaign included a statement by a former member of the Palestinian national team, Mahmoud Sarsak:

Palestinian footballers are routinely forced to endure Israeli military raids and tear gas on our fields, denied by Israel our right to travel to matches, and have seen our teammates killed and our stadiums bombed.

I was jailed by the Israeli occupation for three years without charge or trial and released only after a 96-day hunger strike and worldwide outcry.

Palestinian players run this risk everyday, as they are forced to go through Israeli military checkpoints.

All the while, the IFA (Israel Football Association) holds matches in illegal Israeli settlements, which rob us of our land, water, resources and livelihoods. Adidas’ sponsorship of the IFA prominently places its iconic logo on Israel’s abuses of our rights. The company must immediately cut ties with the IFA.

Ultimately, Adidas did cut ties with the IFA several months later, claiming the move was unrelated to the boycott campaign. The timing hardly seems coincidental, though, but what matters is that Adidas did the right thing.

In 2011, the BDS movement had also called on Adidas to withdraw its sponsorship from the Israel-created Jerusalem Marathon, stating,

Israel has been consistently, systematically, and quite blatantly working to “Judaize” Jerusalem through policies of ethnic cleansing directed at the indigenous Palestinian population to change the demographic reality of the occupied city, in contravention of the Fourth Geneva Convention and international human rights law.

Apparently, at some point, Adidas quietly withdrew its sponsorship of the event.

Now Adidas finds itself again paired with an objectionable partner in the Anti-Defamation League. Maybe Adidas believes the hype that the ADL has created around itself as a “relentless advocate for vulnerable communities.” Millions of Americans are similarly uninformed.

The organization has a great deal to hide.

In a 2019 article entitled, “The ADL is not what it seems,” the Boston Review pointed out, “Under the guise of fighting hate speech, the ADL has a long history of wielding its moral authority to attack Arabs, blacks, and queers.”

ADL’s history includes possession of stolen documents, unlawful surveillance and smear campaigns against such organizations as the NAACP, Jews for Jesus, Greenpeace, and many more. In one raid of ADL offices in the 1990s, the FBI found “dossiers on nearly 950 organizations and 10,000 activists.”

The organization has also in the past shared information with the South African apartheid government, the House Un-American Activities Committee, and the Israeli Mossad. It has a long history of spying on peace, pro-Palestinian and Arab diplomat groups

As the ADL performs its familiar alleged anti-antisemitism tasks, it also works below the radar to undermine the rights of marginalized communities, silence certain human rights organizations, and muzzle progressives, particularly people of color – often by rehashing false accusations of antisemitism.

The upcoming, Adidas-funded anti-bigotry curriculum is only the most recent in a long line of curricula and training materials produced by the Anti Defamation League.

In 1985, ADL created an anti-bias curriculum purportedly “to increase public awareness of prejudice and discrimination and to mobilize residents to challenge all forms of bigotry.” Such a program warrants the authentic voices of marginalized groups, but ADL implemented it in spite of “the objections of black, Asian, Arab, and Muslim communities.”

Over the years, ADL has continued to disregard these crucial perspectives as it has consolidated control over the issue.

“It is worth noting,” declares the Boston Review article, “that anti-racist organizations from California to New York are still fighting with local school boards and universities over…ADL curricula [from the 1980s].”

In an If Americans Knew report on another troubling school program just two years ago, we reported on ADL’s consistent refusal to be transparent in its documentation or to follow its own advice on the pursuit of equity and inclusion.

The Anti-Defamation League routinely abandons all pretense of tolerance when it comes to the Israel-Palestine issue.

Its website is replete with pro-Israel press releases and criticism of organizations and actions that promote justice for Palestinians – but fails to engage on topics like Israel’s violations of international law, its ethnic cleansing of Palestinians, or the many documented reports by major human rights organizations that accuse Israel of apartheid.  These issues are dismissed as examples of antisemitism used to “delegitimize Israel.”

The group’s record-keeping on so-called antisemitic incidents reflects this conflation of legitimate criticism of Israel with antisemitism. ADL’s Annual Audit of Antisemitic Incidents is known to contain skewed, unsupported data. It often uses a fabricated new Israel-centric definition of ‘antisemitism’ rooted in a formulation devised by an Israeli official.

ADL considers calls for Palestinian rights, and even criticism of the ADL itself, to be antisemitic incidents (in fact, ADL’s CEO, Jonathan Greenblatt recently likened supporters of Palestine to ISIS).

An organization that prioritizes the silencing of advocates for justice, and endorses a state that practices apartheid, is hardly qualified to teach young athletes how to celebrate diversity.

It’s not unheard of for groups to pull out of a deal with the Anti-Defamation League. Starbucks did it when ADL’s racist history came to light in 2018. Adidas could do the same.

If Adidas were to declare itself an ally of Palestinian rights or make a statement legitimately criticizing Israel, the ADL’s “conscience” might kick in again.

But first, Adidas needs to know the score.

The Anti-Defamation League enthusiastically defends Israel, in spite of these atrocities:

MORE ON THE ADL:

FURTHER READING ON ISRAEL AND SPORTS:

MORE ON THE BOYCOTT MOVEMENT: