You Are Here: Home → 12-year-old dies from injuries after Israeli soldier shot him Sept 28 in Jenin 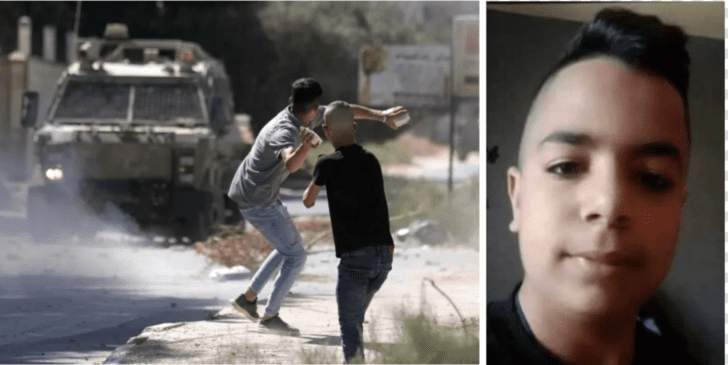 Mahmoud Sammoudi, 12, from Al-Yamoun town west of Jenin, succumbed to wounds inflicted by Israeli soldiers who had invaded the West Bank, killing four Palestinians outright and injuring 44. Israeli forces have killed 120 Palestinians in the past six months, while 9 Israelis have also died.

On Monday, the Palestinian Health Ministry confirmed the death of a child who, on September 28, was shot and seriously injured by Israeli army fire when the soldiers also killed four young Palestinian men in Jenin and Jenin refugee camp in the northern West Bank.

The three Palestinians killed on the day of the invasions of Jenin and its refugee camp were identified as Mohammad Hisham Abu Na’sa, 25, Abdul-Rahman Fathi Khazem, 27, Ahmad Nathmi Alawna, 24, and Mohammad Mahmoud Barahma, 30.

On the day of the Israeli invasion, the soldiers injured forty-four Palestinians, including several young men and children, who suffered life-threatening wounds.

The child’s death brings the number of Palestinians killed by Israeli fire since the beginning of this year to 165.

On Sunday morning, the Israeli army announced the death of Sgt. Noa Lazar, 18, an Israeli soldier who was shot by a Palestinian at a military roadblock near Shu’fat, in occupied Jerusalem, on Saturday evening. [21 Israelis have been killed this year.]

Editor’s note: Thanks to the Israel lobby, American taxpayers give Israel over $10 million of their tax money per day, while another $10 million per day is expended on projects because they benefit Israel. Many people say it’s time for this to end.