You Are Here: Home → Worshiping the state of Israel on Yom Kippur, in a leading NY synagogue

Worshiping the state of Israel on Yom Kippur, in a leading NY synagogue 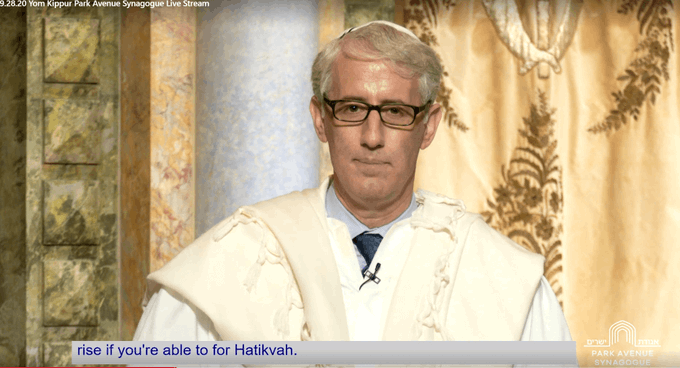 Park Avenue Synagogue’s sanctification of Israel… Countless synagogues fly the Israeli flag and sermonize for AIPAC, the Israel lobby, and put Israel propaganda on the front lawn… ‘I know so many rabbis whose children have moved to Israel and who they themselves own a vacation home there where they plan to retire. Many do retire there…’

From time to time we try to cover the injection of pro-Israel messaging into American Jewish worship, and here is a prime example. Park Avenue Synagogue is a prominent conservative synagogue in New York; and on Yom Kippur a week ago the rabbi offered a mini-sermon about his son’s proud service in the Israel Defense Forces, saying it shows that Israel is the true Jewish home. He then had the (virtual) congregation stand for Israel’s national anthem.

“There is no mistaking it: Zionism is the synagogue’s core value that takes over at a key moment in the Yom Kippur service,” says the religious friend who pointed the incident out to me.

Rabbi Neil Zuckerman breaks into the liturgy [at 2:32:00 of the Yom Kippur service] to explain the meaning of the Jewish exile. Then he tells of his son joining the Israeli army.

“Because of our sins we were exiled from the land, the liturgy says. Jews have always been able to survive the pain and trauma of exile by never looking away, by always orienting ourselves toward the land of Israel, by facing home.

“A story that captures what it means to be home: In the course of my son’s basic training in the Israel Defense Forces he was recognized as an outstanding exemplary soldier at a ceremony that took place a few months ago. A big honor, we’re very proud of him.

“And sure enough as I watched that ceremony at 2:30 in the morning I heard the announcement describing this award, and it was being awarded to Jacob Zuckerman from Kibbutz Maoz Haim.

“Yes, we were exiled from the land, but, od lo avda tikvateinu– we have never lost our hope that we would return home and we have.

“Please rise if you’re able to for Hatikva.”

The cantor then sings the Israeli national anthem with reverence.

My religious friend goes on: “It’s the first time I’ve heard Hatikva, not as an add-on but inserted into the liturgy itself. The cantor just finished chanting ‘God is sanctified through just charity’ and is about to start the re-enactment of the High Priest’s Temple ritual. This really is the very heart of the Yom Kippur morning liturgy…

“This was particularly surprising to me because Park Avenue Synagogue is a Conservative shul where the service is the traditional liturgy. It is much closer to an Orthodox shul than Reform. Traditionalist Orthodox would be outraged at the rabbis’ subversion of the liturgy to say that a secular nationalistic ideology would countermand God’s punishment of exile.

“This attitude is mainstream. If Park Avenue Synagogue can do it, anybody can. I know so many rabbis whose children have moved to Israel and who they themselves own a vacation home there where they plan to retire. Many do retire there. The spiritual leaders of America’s Jews don’t see their Jewish future, or our Jewish future here. What a mess.”

I’ve long contended that religion and politics overlap, and that Zionism is a religious value for many Jews: they define Judaism as comprising Jewish nationalism and they can quote scripture to explain their devotion, as the rabbi does. Countless synagogues fly the Israeli flag and sermonize for AIPAC, the Israel lobby, and put Israel propaganda on the front lawn– a banner saying “We support Israel in her quest for peace.” These are spiritual issues for these folks. So anti-Zionism, which entails the idea that your national home is where you live, is a struggle that also happens inside congregations…

Park Avenue Synagogue’s sanctification of Israel is also consistent with the divide that Peter Beinart described last week among American Jews over Israel. Israel supporters are increasingly religiously-identified, he told the Arab Center. The men are wearing yamulkes. While those critical of Israel are more secular, though they strongly identify as Jews, often on other than a religious basis.

[Editor’s note: For other components of the pro-Israel lobby in the US see this.]

The Extremist Origins Of Education And Sharing Day: Why Is The US Honoring A Racist Rabbi?