You Are Here: Home → Recent censorship by the Israel lobby: five incidents 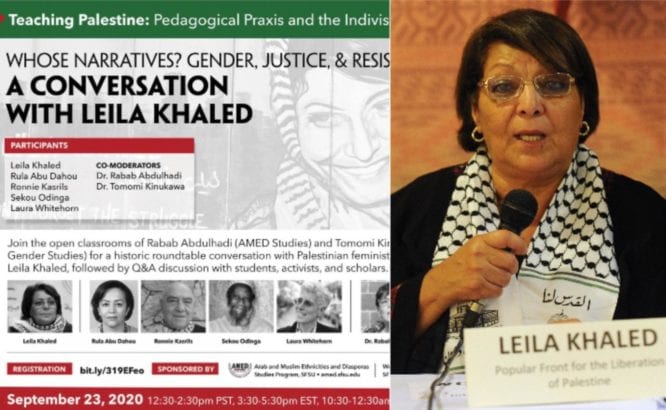 This online San Francisco State University event was cancelled by Zoom, and later blocked by Facebook and YouTube (Screengrab/ AFP)

Recently, Israel partisans have pressured Zoom to cancel a university-sponsored talk, a prominent law program to rescind a job offer, a public broadcaster to apologize for using the word Palestine, companies to stop delivering for a restaurant, and an editor to suppress an interview… The goal is to prevent the public from learning about Israel’s long record of violence and human rights abuses…

By Yves Engler, reposted from The Palestine Chronicle.

How much is too much? When will Israeli nationalists in North America completely discredit themselves by overusing their power to crush those defending Palestinians?

The recent ruthlessness of the Israel lobby is remarkable. Recently they’ve convinced Zoom to cancel a university-sponsored talk, a prominent law program to rescind a job offer, a public broadcaster to apologize for using the word Palestine and companies to stop delivering for a restaurant.

A week ago Israel lobby groups convinced Zoom to cancel a San Francisco State University talk with Palestinian resistance icon Leila Khaled, former South African minister Ronnie Kasrils, director of women’s studies at Birzeit University Rula Abu Dahou, and others. It is thought to be the first time Zoom has ever suppressed a university-sponsored talk.

CBC’s The Current recently apologized for employing the word “Palestine”. On August 18 guest anchor Duncan McCue introduced graphic artist Joe Sacco by referencing his work in Bosnia, Iraq and Palestine (Sacco has a work called Palestine). At the beginning of the next day’s edition, McCue apologized for having mentioned Palestine and Honest Reporting Canada boasted about their efforts to pressure the public broadcaster from employing the P-word.

As part of a bid to bankrupt a small left-wing Toronto restaurant that has an “I love Gaza” message in its window the CIJA and B’nai B’rith successfully campaigned to shutter Foodbenders delivery services, institutional contracts and social media accounts. They allied with the far-right Jewish Defense League and others who vandalized the restaurant in July.

In an August Walrus story titled “Objectivity Is a Privilege Afforded to White Journalists” former CBC journalist Pacinthe Mattar describes a senior editor stepping in to suppress an interview from Jerusalem with Ahmed Shihab-Eldin, an Emmy-nominated journalist of Palestinian descent. Many months later Mattar was blocked from an expected promotion by the “director who had decided not to run the 2017 interview from Jerusalem” who “had expressed concerns that I was biased and therefore should not be promoted, an opinion shared by some of the other committee members. And that was that.”

Anti-Palestinian organizations are waging an aggressive campaign to have Facebook adopt the ‘stop criticizing Israel’ International Holocaust Remembrance Alliance’s (IHRA) definition of antisemitism. The explicit aim of those pushing the IHRA’s definition of antisemitism is to silence or marginalize those who criticize Palestinian dispossession and support the Palestinian civil society-led Boycott, Divestment, Sanctions (BDS) movement. [Editor’s note: See this for essential information this fabricated definition. Also see this.]

The Israel lobby cancel machine rolls along in spite of evermore overt Israeli racism, conquest, and rights violations. Many of those targeted in the above-mentioned incidents have suffered emotionally and career-wise yet the impacts on them are insignificant compared to the daily indignities Palestinian suffer. The Israeli state continues to steal Palestinian land in the West Bank, oversee a punishing blockade of Gaza and allow Toronto Jews to emigrate while Palestinians driven from their homes in 1948 can’t even visit, let alone emigrate.

The Israel lobby is a unique political force. Rooted in European colonialism and the US empire’s regional interests [Editor’s note: Actually, it’s rooted in to the in the Zionist political movement – see this], it is backed by many zealous billionaires [e.g. these] and a substantial portion of a generally influential ethnic/religious community. It also crassly exploits victimhood. As John Clark recently posted on Facebook, “Zionism is the only political ideology I know of that claims that disagreement with it is a hate crime.”

Fortunately, every cancel and smear campaign it wages alienates some new people and opens others’ eyes. Unfortunately, many more well-meaning individuals will suffer emotional and financial consequences before the Israel lobby cancel machine is stopped.

[Editor’s note: There was one additional recent case of censorship: The Lancet censors Gaza health letter after pro-Israel pressure]

Yves Engler is the author of Canada and Israel: Building Apartheid and a number of other books. He contributed this article to The Palestine Chronicle. Visit his website: yvesengler.com.

Repression of speech and scholarship on Palestine needs to end