You Are Here: Home → Witnesses say false smears of ‘antisemitism’ at Chicago ‘Dyke March’ were initiated by Israel partisan 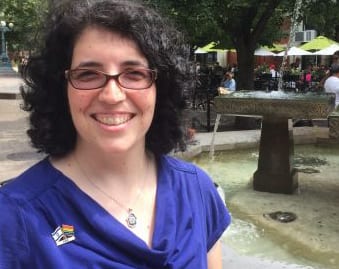 Laurel Grauer, manager of a pro-Israel group, claimed there was antisemitism at annual LGBTQ march, and media repeated the accusations. But witnesses tell a different story and say many paraders wore kippas, Stars of David, and other visible symbols of the Jewish faith.

As the annual LGBTQ Pride parades took place last weekend, a small collective of LGBT organizers with pro-Palestinian views attracted international controversy when they were accused of anti-Semitism by an employee of a pro-Israel advocacy group. Chicago’s chapter of the annual Dyke March, an annual march of mostly lesbians held since 1981, and nationally since 1993, was subjected to a wide-reaching smear campaign initiated by Laurel Grauer who alleged that the Dyke March either ejected Jews or individuals carrying Jewish symbols from the march out of apparent anti-Jewish prejudice.

Grauer is a manager of programs and operations for A Wider Bridge, a nonprofit that organizes LGBT-themed trips to Israel and sanitizes Israel’s image as a human rights violator by coordinating pro-Israel support within American LGBT communities. [See here.] Her accusations were repeated in multiple media outlets.

But organizers and eyewitnesses gave a different story. According to individuals present at the march, many paraders wore kippas, Stars of David, and other visible symbols of the Jewish faith without being asked to leave. March organizers clarified that three individuals, including Grauer, were asked to leave after repeatedly expressing support for Israel and Zionism. During the march, Grauer and others attempted to change protest chants to remove the word “Palestine.” This rhetoric, in conjunction with their use of rainbow flags with superimposed Star of David that loosely resembled the Israeli flag, sparked an initial discussion. During that two-hour discussion, Grauer and the others reaffirmed their support for Zionism, prompting the marchers to ask her and her party to leave.

March organizers repeatedly clarified that Jewish symbols were welcome, so long as they did not signify support for the Israeli government. Witnesses corroborated this version of events. Text message screengrabs published by the Dyke March organizers show that Grauer was aware of the march’s stance on supporting Palestinian liberation and she may have anticipated a confrontation; those messages reaffirm that the Dyke March was permissive of Jewish pride flags provided they were not used to signify support for Israeli policy.

A Wider Bridge has a history of issuing allegations of anti-Semitism against its critics, including a 2016 incident in which its volunteers falsely claimed that leftists had protested a Jewish prayer service they had organized, when in fact the protesters targeted a pro-Israel lobbying reception.

The Chicago Dyke March takes a strict policy regarding racism, and holds that Zionism is a form of white supremacy, citing Israel’s legalized discrimination against Palestinians and the forced displacement of Palestinians to build Israeli settlements. In particular, the Dyke March emphasized in a statement released this week, its “priority is to ensure a safer space for those who are most marginalized” and that the March “welcome[s] and include[s] people of all identities, but not all ideologies.” Among those people who are most marginalized, of course, are Palestinians, Arabs, and immigrants who are queer.

Palestinians who are queer have repeatedly expressed their position that Palestinian queers face different challenges that are often misunderstood by those involved in the Western LGBT movement. Among the most jarring of those challenges is the fact that Israeli intelligence agencies have blackmailed gay Palestinians into working as informants, lest they be “outed”. Members of the Muslim community, regardless of nationality, have also pointed out that they are often forced to pick between their faith and sexual orientation. The cynical use of LGBT rights in anti-Muslim discourse has further contributed to the erasure of Muslim queers. In addition, LGBT immigrants who may qualify for asylum for persecution suffered because of their status as LGBT persons are often forced to go into graphic detail about their trauma in front of judges and asylum officers, and therefore rarely have the luxury of choosing when to come out; as a result, they often lack the communal support systems that others have and may be compelled to simply stay undocumented and closeted as they remain vulnerable to deportation.

All of these challenges are exactly why the universalist and inclusive message underpinning the Chicago Dyke March’s support for Palestinian rights and stringent opposition to state violence and oppression are so important – and why A Wider Bridge’s smear campaign is so dangerous. While the United States has made considerable progress in opening up public spaces for LGBT persons from some backgrounds, LGBT persons from other backgrounds–like those at the Dyke March–remain in a very vulnerable and precarious state. Using bogus allegations of anti-Semitism to sink the Dyke March or intimidate it into bending strict policies designed to ensure inclusion for people from marginalized backgrounds is an outright attack on one of the few spaces where those individuals can be queer and proud.

A Wider Bridge’s smear campaign closely resembles the objectionable and challenged practices of other organizations that have co-opted LGBT pride marches. In New York City, twelve demonstrators from No Justice No Pride were arrested for holding a sit-in to block an NYPD-sponsored pride march, pointing to the NYPD’s violence against black, brown and indigenous communities and citing police discrimination against black, brown, and indigenous LGBT persons. In Washington D.C., members of No Justice No Pride were arrested in a separate protest against Wells Fargo’s sponsorship of a pride event, citing Wells Fargo’s investment in the Dakota Access Pipeline through the Sioux Standing Rock Territory.

While all of these controversies differ, all of them highlight the challenges that members of marginalized groups face in the context of LGBT pride marches that seek to normalize state violence and corporate complicity in it. The use of LGBT discourse to pinkwash Israeli state violence – and A Wider Bridge’s slanderous allegations against those who do not comply – are simply one part of an ugly trend to turn pride events from a commemoration of the sacrifices of marginalized peoples into an effort to sanitize their marginalization.

Amith Gupta is a law student at New York University, where he is an Institute of International Law & Justice scholar. He is a Palestine solidarity activist. Other posts by Amith Gupta.