You Are Here: Home → Winston-Salem Journal: On the ground with Israelis and Palestinians

Winston-Salem Journal: On the ground with Israelis and Palestinians 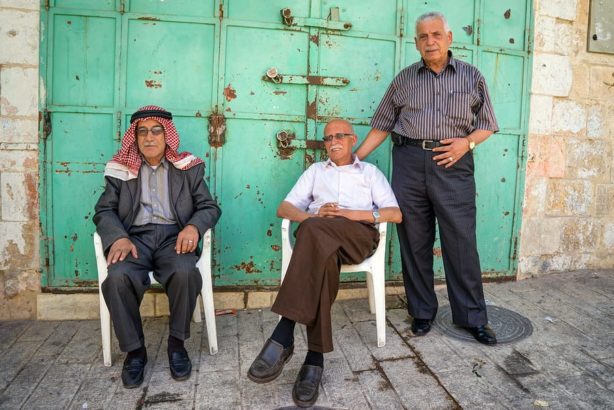 “Palestinians were, by far, the nicest people I have met anywhere.”

Being an American Jew, someone who lost family in the Holocaust, and who has a lot of beautiful loving family members in Israel, the Holy Land is especially important to me. As an academic dermatologist, a scientist who routinely questions dogma, I came to question our common understanding of Israel/Palestine.

Dermatology gave me first-hand experiences in countries across the Middle East. The Muslim people I met in Egypt, Saudi Arabia, and even Iran were all warm and friendly. Those experiences gave me the courage to go to Palestine and meet, firsthand, Israel’s “enemy.” Like a good researcher, I had a hypothesis to test, that Palestinians would be nice people, just like everyone else.

Max and Jane Carter, Quakers in Greensboro, take a group to tour Israel/Palestine and volunteer in Ramallah for about two weeks each summer. This year I went along, and what I found surprised me.

I was not surprised by the treatment Palestinians suffered under Israelis, but it was still emotionally moving to be there, to see apartheid happening. A former Israeli soldier, proudly Jewish, took us to Hebron and described how there are separate laws for Jews (Israel civil law) and non-Jews (military law). He pointed out that if an Israeli throws a stone at Palestinians, nothing is done; if a Palestinian responds with a stone, he or she is sentenced to years in prison.

He described how Israeli settlers would harass Palestinians, then complain to the military, whose response would be to create “sterile” zones where Palestinians would not be allowed. Settlers would then enter those zones, complain about the Palestinians near them, and the zones would be expanded. For the benefit of a few hundred Israeli settlers, formerly vibrant parts of this city of 200,000 Muslims have been turned into a ghost town, hundreds of Palestinian businesses closed, the doors of people’s homes welded shut. The settlers would, quite correctly, point out that what they are doing is not nearly as bad as what was done to Palestinian families in the founding of Israel, when hundreds of thousands of Palestinian men, women, and children were expelled and made and kept refugees from their homes, their homes and villages destroyed.

What did surprise me was that Palestinians were, by far, the nicest people I have met anywhere. Entering Ramallah, home of the PLO and Palestinian Authority, passing a sign saying that it was dangerous for Israelis to enter, we were warmly greeted by people wherever we walked. It was a friendliness I have not experienced anywhere else, not in New York or Winston-Salem, not in any of the many countries to which dermatology has taken me. The warmth and friendliness of the Palestinian people could only be described as what you might expect people to be like if they were, as Palestinians are, the people who live in the land where Jesus once walked.

Having gotten to break bread in the homes of Palestinian Christian and Muslim families, having met Palestinian workers, teachers, children, religious leaders, refugees and legislators, I am convinced that there could be peace overnight and the security Jewish people need if Israel would repatriate Palestinian families, give everyone equality and justice, and live together in peace throughout the Holy Land.

People who have not had the firsthand experience that I have had may tell you, based on the violence that they have seen, that Palestinians must be violent people, but they aren’t. Peaceful Palestinian people suffer from far more violence meted out by good Jewish Israeli people who are pained by it but who believe—quite wrongly—that the only way Jews can have security for their children is via their oppression and dispossession of non-Jewish Palestinian families.

Our group met with Rami Elhanan, a Jewish Israeli, the son of a German Holocaust survivor, a man whose beautiful 12-year-old daughter was killed by a Palestinian suicide bomber. He understands like no one else can, and he told us:

We don’t want you to be pro-Israeli or pro-Palestinian; we demand of you to be pro-peace. To be against injustice and against this ongoing situation in which one people is dominating another. It must be changed, it’s the essence of evil, and it must be stopped…I am a Jew with the unmost respect for my people, to my tradition, to my history and my religion. And I will tell you that ruling and oppressing and humiliating and occupying millions and millions of people for so many years without any democratic rights is not Jewish, period, no two ways about it, and being against it is not anti-Semitism.