You Are Here: Home → Where do YOUR Congressional candidates stand on Palestine/Israel? See Scoreboards

Where do YOUR Congressional candidates stand on Palestine/Israel? See Scoreboards 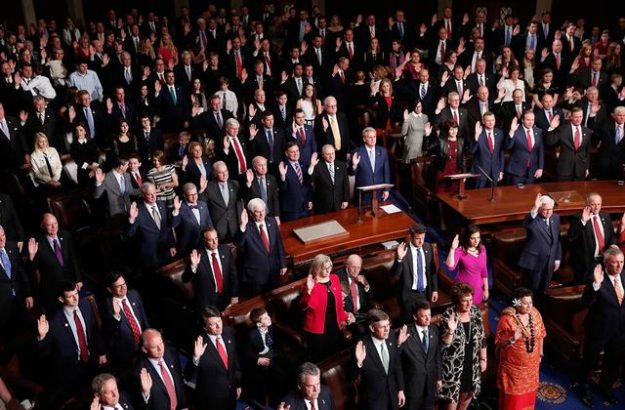 For years, both sides of the aisle in Congress have consistently supported Israel. We all know that, but do we realize the extent of that support? Do we know who stands for justice amid this pandering? Accountability is what can compel our government to do the right thing.

If Americans Knew has compiled information that you can use to hold your Congress people accountable for their position on Palestine/Israel. In these charts, you can see for yourself how each Congressional candidate feels about the Palestine/Israel issue – and how the incumbents have been voting on the issue. And you can discover the pro-Israel donations behind each campaign.

Armed with this knowledge, it’s up to you to vote for the candidates who have, or who will, represent you best.

It is with mixed emotions that If Americans Knew offers our Senate and House Scoreboards for use by US voters. Our goal is to exhibit for our readers how their Senators and Representatives have been voting on issues related to Palestine/Israel and illustrate the collective position of our current Congress – in addition to presenting, where we are able, the positions of challengers. We hope this will be used as a tool for informed voting. 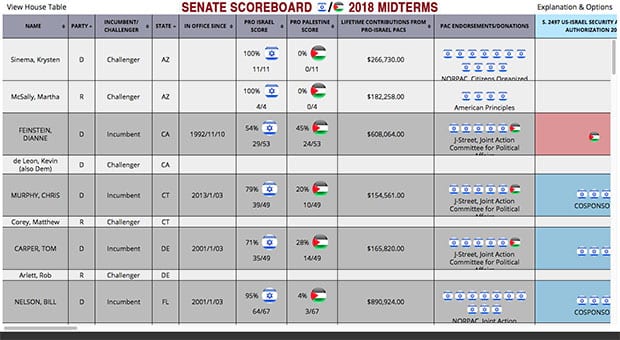 CLICK HERE TO VISIT THE SENATE SCOREBOARD AND CHECK ON THE FOLKS THAT YOU ARE PAYING TO REPRESENT YOU IN WASHINGTON.

HOUSE SCOREBOARD CAN BE VIEWED IN SECTIONS OR AS A WHOLE (sections load in under a minute, whole chart may take up to 10 minutes to load):

We were disappointed, if unsurprised, by the results of our research – Congress on the whole continues to withhold justice from Palestinians. It is currently poised to give Israel a minimum of $38 billion over the next 10 years. Such unfair policies cause tragedy in the region and damage to the U.S.

In addition to collecting data on incumbent legislators, we have been reaching out to challengers, asking for a statement on the Palestine/Israel issue. We are adding their responses to the chart as we hear from them. (Below, we will ask for your help in mining for information.)

Our hope is that American voters (and taxpayers) will make use of this information to generate some meaningful, needle-moving dialogue in time for the midterm elections, and to continue to raise the issue afterward.

In these charts, you will find incumbents’ lifetime campaign contributions from pro-Israel organizations, obtained from opensecrets.org . You can even see which organizations endorsed and/or funded which candidates. Most of the PAC websites indicated that they contribute to politicians who “support” or “are likely to support” pro-Israel legislation. Do campaign contributions correlate in any way with voting records? You decide.

After the campaign contribution columns, you will find a record of each Congress person’s position on key issues in 4 categories:

Background information and further reading – including hyperlinks – are provided for each of the issues.

We gave Congress people pro-Palestine credit if they supported any of these actions.

All other issues were “pro-Israel” by default (i.e. devised to endorse Israeli actions). If the individual backed them, he/she received pro-Israel points.

Bills were scored as follows:

Resolutions were scored in this way:

Letters and miscellaneous actions were given 2-3 points.

Legislators who accepted donations from pro-Israel organizations received 4 pro-Israel points for the first org and 1 point for each thereafter. The exception is J-Street: because this PAC has pro-Palestinian positions on some issues (e.g. settlements), J-Street endorsement garnered 1 pro-Palestinian point and 1 pro-Israel point – so it’s a wash. (See our comments on the spreadsheet to learn more about J-Street.)

Final scores compare pro-Israel and pro-Palestinian points earned, and take into account the number of actions available for each senator to take during their tenure.

(Our small staff has done its best to compile all the relevant information,  but if you find material we missed, or new material, please email us.)

When they talked, we listened – you should too

The second half of the Senate chart contains their comments on thirteen of the most talked-about issues, plus space for “miscellaneous comments” for those who had more to say. Each of the comments is sourced. (A few comments were neutral, but most took a position on the issue – we scored accordingly.) Going on record is not a trivial act – take the time to read these.

Congress people vote the way they vote for many reasons. A senator who takes an action that is supportive of a pro-Palestinian position is not necessarily pro-Palestinian. For example, Sen. Kirsten Gillibrand withdrew her cosponsorship for the Combating BDS bill, not out of sympathy for Palestinians, but because she was pressured on the bill’s First Amendment problems.

The score you see for each senator does not tell the whole story – but it is very telling.

The Libertarian Party is running 18 Senate candidates and over 100 House candidates. Unlike the two major parties, the Libertarian Party platform does not contain a pro-Israel plank; in fact, it seems to have avoided the issue of Palestine-Israel completely, and provided this general position on foreign policy:

Voters may wish to ask any Libertarian candidates in their district about their position on Palestine-Israel. Please share their responses with us.

“Our Green values oblige us to support popular movements for peace and demilitarization in Israel-Palestine.”

The Green Party also supports global BDS “until Israel meets its obligation to recognize the Palestinian people’s inalienable right to self-determination and fully complies with the precepts of international law” by ending the occupation and dismantling the wall, giving Palestinian citizens of Israel full equality, and promoting the Right of Return.

“We support a U.S. foreign policy that promotes the creation of one secular, democratic state for Palestinians and Israelis on the land between the Mediterranean Sea and the River Jordan as the national home of both peoples, with Jerusalem as its capital.”

Because the Green Party has taken a stand on Palestine, we have included their candidates on the House Scoreboard.

We need your help!

If you are following your state’s House and/or Senate race, please help us. We would appreciate any quotes by challengers on any and all Palestine/Israel-related topics – including from third-party candidates. Please email us anything you read (with source) or hear (with event and date), and we will add it to the chart. Send your contributions to elections2018@ifamericansknew.org right away so that together we can educate voters on where their politicians stand!

If your candidate has not taken a public position on Palestine/Israel, ask them where they stand. And if they are uninformed (or misinformed), instruct them. What better way to exercise your free speech rights (while we have them)?

If we don’t educate our Congress people, someone else will – as Rep. Eliot Engel (D-NY16) recently told a large audience gathered at the behest of AIPAC, allies of Israel have identified “people in Congress who don’t understand what it’s all about,” and they will get “educated.”

More voices must be heard if we wish fair, rational, just U.S. policies that are not determined by a special interest lobby.

And then use this information

Last but certainly not least, please refer people in your circle of influence to this resource. Show them the priorities and affinities our politicians hold, and encourage them to cast an informed vote. Until Americans elect candidates who support justice and peace, we will continue to get American policies that do the opposite.

UPDATE: Read a summary here. A Tutorial on using the scoreboards, including background information on the project, is here. 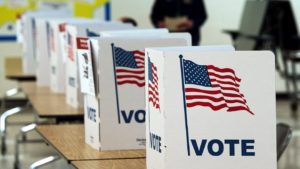