You Are Here: Home → Caught on video: Israeli forces shot Palestinian boy, 14, in the eye 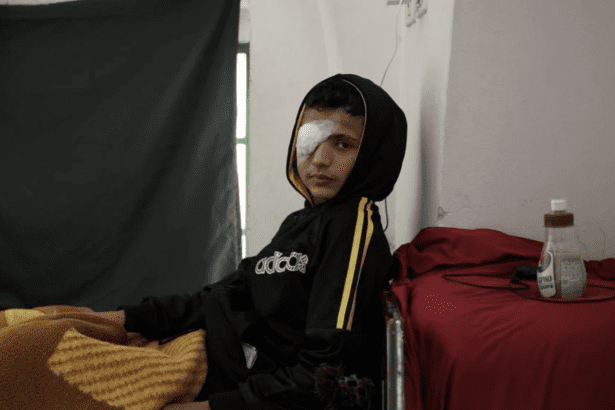 Fourteen-year-old Palestinian Izz al-Din al-Batsh has been recovering in bed since he was shot in the eye.

Security camera footage shows that this Palestinian boy was shot in the eye as he stood in a sheltered place with his cousin, doing nothing. Rights groups have long condemned Israel’s use of rubber-coated steel bullets, which have repeatedly killed and wounded Palestinians.

It was a typical Friday afternoon for 14-year-old Izz al-Din al-Batsh. Friday prayers were finished and he was done with his homework for the weekend. As he normally did on non-school days, he left his home in the Old City of Hebron, an occupied city in the southern West Bank, and made his way to the vegetable shop where he worked with his cousin Karim.

The store sits just outside the Old City, in the Bab al-Zawiya neighbourhood, one of Hebron’s flashpoints. It is also the site of near-weekly confrontations between local Palestinian youths and armed Israeli soldiers, who are permanently stationed at a military checkpoint in the area.

Izz al-Din and Karim watched, several metres away, from what they believed to be the safety of the shop.

“We could see the soldiers not too far away from us, and there were some other kids around also watching the clashes,” Izz al-Din told Middle East Eye from his bed. From what he could make out, the soldiers were firing tear gas and sound bombs.

“We were just watching the clashes and all of a sudden I felt something hit me in the face,” he said. He fell to the ground as the pain bit into the area around his right eye.

The moments after he fell to the ground are a blur.

Izz al-Din was rushed to a local hospital by other bystanders. Emergency room doctors and nurses gave him first aid.

When he eventually came to, doctors told Izz al-Din that he had sustained a serious wound from a rubber-coated steel bullet, and would likely completely lose his right eye.

A video of a confused Izz al-Din, his eye and head covered in bloody bandages, crying as he lay in the hospital next to his father, went viral on social media over the weekend, as Palestinians from across the West Bank lamented the teen’s plight.

“I can’t describe the feeling, as a father, of seeing your child like that,” Nidal al-Batsh, Izz al-Din’s father told MEE on the roof of his house. “It’s absolutely devastating.”

“I think that even if it wasn’t my son, but I saw that video of Izz al-Din in that state, I would have broken down as well,” he said, referring to the outpouring of grief and support his family has received in the wake of the video.

“It’s devastating, just on a human level,” Batsh continued. “It’s horrible for anyone, old or young, to suffer an injury like this one – but especially for a young child like Izz al-Din.”

Following the news of Izz al-Din’s injury, a number of media outlets quoted his cousin Karim as saying that the soldiers fired directly towards the boys, speculating that the boy could have been wrongfully targeted by the soldiers.

The Israeli army reportedly opened a division-level investigation into the incident, after which the division’s commander concluded that the soldiers had not fired directly at the shop, according to the Times of Israel.

According to the paper, the Israeli forces’ unit in charge of investigations into wrongdoing and negligence, the military police, had not opened up their own investigation.

“There was a violent protest, including stone-throwing and stone-slinging, and the military responded with riot dispersal mechanisms, including rubber bullets,” an Israeli military spokesperson said in a statement published by Israeli media.

The spokesperson claimed that it is possible that Izz al-Din was wounded by a ricocheted rubber bullet or rocks thrown by protesters.

Izz al-Din’s family maintains that the confrontations were taking place down the street from the vegetable shop, and that the boys were not participating.

Those claims are backed up by the shop’s security camera footage. It shows Izz al-Din (on the right) and Karim (on the left) standing inside, watching the confrontations – which can’t be seen inside the frame – from a distance.

A Palestinian child from Hebron was shot in his eye, he got a rubber bullet which was shot by an Israeli army sniper. The video is clear, the child didn't show any threat on the soldiers. He was inside a vegitable shop. pic.twitter.com/uZvEDP6hvM

“The boys were clearly not participating in the clashes or stone-throwing,” Batsh told MEE. “But even if they were, is that an excuse to seriously injure or maim someone in the way that the soldiers did to Izz al-Din?”

“Whether he was shot on purpose or not, the reality is that he is a child, and he lost his eye as a result of the soldiers’ actions,” he added.

“Palestinians have been sustaining serious and life-threatening injuries as a result of things like rubber bullets and tear gas,” Batsh said, referring to what Israel calls “crowd dispersal measures”.

For decades, Palestinian activists and rights groups have condemned Israel’s use of rubber-coated steel bullets. Though less lethal than live ammunition, the bullets can cause serious damage – and even death – to those struck.

A 1988 report by Israeli human rights group B’Tselem found that in 11 months during the First Intifada, at least 58 Palestinians were killed by rubber-coated steel bullets.

In the report, forensic pathologist Dr Robert Kirschner said that “non-lethal” weapons such as rubber-coated bullets, were capable – when used against civilians – “of inflicting severe pain and varying degrees of injury. Many of the weapons, even when used as prescribed, may cause death in susceptible persons, particularly children, the elderly and those with underlying illness such as heart disease”.

In 2013, B’Tselem and the Association for Civil Rights in Israel (ACRI) called for an immediate end to the use of rubber bullets against protesters in the West Bank, following numerous instances of rubber bullets killing or seriously wounding protesters.

A 2017 report from a team of US-based researchers, analysing data from several countries including Israel and the occupied Palestinian territories, found that rubber bullets caused significant injuries and fatalities.

According to the study – using data taken from 26 different reports published across more than 25 years – three in every 100 people wounded by rubber-coated bullets died as a result, while more than 15 percent were left with a permanent disability.

“We were lucky that Izz al-Din was not killed, but who’s to say that someone else will not be killed by these bullets?” Batsh asked, adding that he believed Israeli forces should halt the use of the weapon.

“Today it was my son, but tomorrow it could be my neighbour, or his son or someone else in the community,” he said. “I wouldn’t wish this upon my worst enemy.”

“The soldiers who did this need to be held accountable, so that this never happens again to another child – or to any other Palestinian.”

The Israeli army did not respond to a MEE request for comment.

Three days on, Izz al-Din is recovering at home, surrounded by his parents and siblings. He spends most of his time laying in bed, with his eye and the right side of his face still covered in bandages.

According to his father, doctors at the St John of Jerusalem Eye Hospital, where Izz al-Din was transferred for surgery on Friday night, rushed him into emergency surgery but were ultimately unable to save his eye.

“The doctors did everything they could, they had no other choice,” Batsh said, adding that he was just glad that his son was alive, and that his left eye appeared to be safe.

Batsh said that while the family was focused for now on Izz al-Din’s recovery, they’re looking into different options, including a potential prosthetic eye implant.

“His health is more important to us than anything. We pray to God that we can find some kind of treatment for him, it doesn’t matter where,” he said.

With few options in the West Bank, Batsh added that he would welcome any medical advice or assistance that doctors and medical professionals around the world could offer the family.

“We just want him to play football with his friends again, to be able to complete his studies and be a normal child,” Batsh said. Izz al-Din was at the top of his class, he added, and had always excelled at school.

Izz al-Din, who described the experience as a “huge shock”, feels lucky to be alive.

“I know I lost my eye, but there are other people who have lost so much more than that because of the Israeli occupation.”