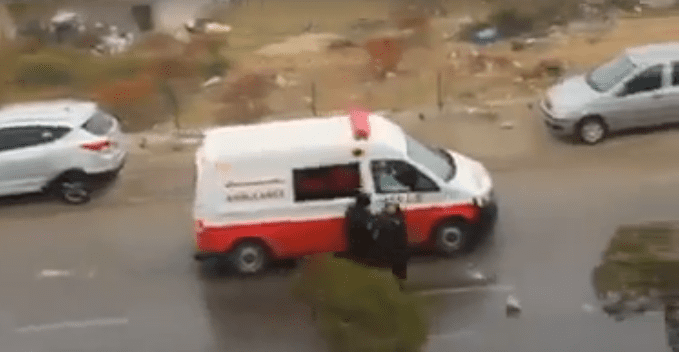 HEBRON: In a video that has gone viral on social media, Israeli forces on Wednesday violently detained two Palestinians — who locals reported were teenage girls — from inside a Palestinian ambulance in the Hebron district of the southern occupied West Bank.

The video shows a group of armed Israeli soldiers stop a Palestinian Red Crescent ambulance at gunpoint in the town of Halhul.

The soldiers attempt to pull people at the back of the ambulance out onto the street, and after verbal and physical confrontations, the soldiers jumped into the ambulance and pulled out two Palestinians.

A witness told Ma’an that he saw Israeli soldiers forcing two teenage girls out of the ambulance at gunpoint.

He added that Israeli female soldiers handcuffed the girls and detained them. The identities of the girls remained unknown.

An Israeli police spokesperson was not immediately available for comment.