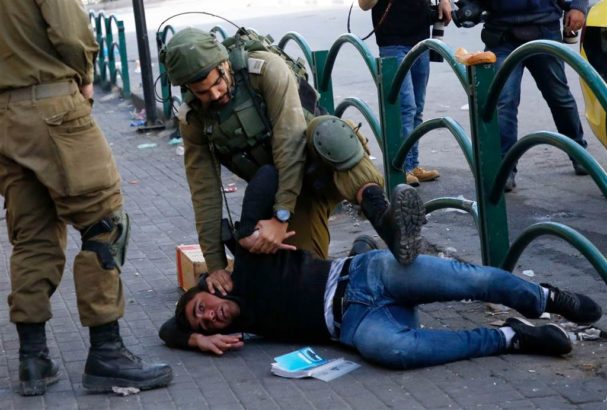 Israeli forces arrest a man throwing stones during clashes in the city center of the West Bank town of Hebron.

Over 230 Palestinians – dozens of them children – face inhumane conditions in prison. Soldiers refer to them as “Trump detainees.”

The Palestinian Detainees’ Committee has warned of the significantly increasing number of Palestinians who were abducted by the Israeli army in one week, since Trump’s illegal recognition of occupied Jerusalem as the unified capital of Israel, adding that the soldiers have abducted more than 230 Palestinians, including dozens of children, who are facing torture, bad conditions and humiliation.

The committee stated that the number of abducted Palestinians is dangerously increasing, especially due to massive invasions of homes and property in several parts of occupied Palestine, including Jerusalem.

It added that all of the abducted Palestinians have been subject to one or more forms of physical and psychological torture, humiliation and degradation during their arrest and interrogation.

The committee said that its lawyers managed to visit many of the abducted Palestinians, who told them that they were left with food or water and even blankets for 24 hours, and were frequently assaulted and tortured.

The detainees, who are held in Etzion military base and security center, south of Bethlehem, said that the soldiers and interrogators dubbed them as “Trump detainees,” referring to all Palestinians who were taken prisoner since the U.S. President made his illegal announcement, in direct violation of International Law and all related United Nations resolutions.

The detainees said that many of them are sleeping on the ground without mattresses or covers, and scores were later moved to Ofer prison, near Ramallah, where they were subject to strip searches and additional violations.

The Committee stated that Israel continues to violate International law and all related resolutions and agreements by its ongoing targeting of civilians, and by violating the basic rights of the political prisoners.

Lieberman Calls for Boycott of Arabs in Israel