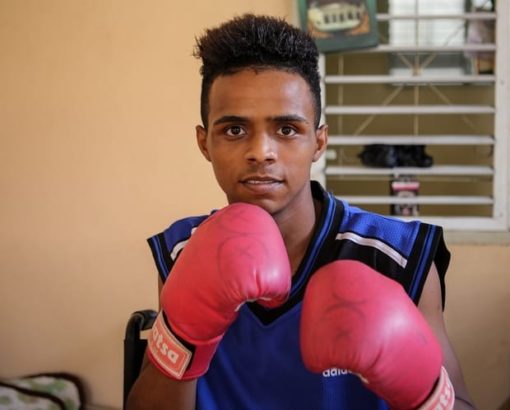 Ahmad Abu Marahil was a boxing champion-in-the-making. Israel had refused to let him exit Gaza to participate in international competitions. Now Ahmed is wheelchair-bound after Israeli forces shot in with bullets in both legs during Great March of Return protests.

Since March 30 2018, Palestinian refugees in the Gaza Strip — including families, women, and children — have gathered along the Israeli border to highlight their dispossession in 1948 and protest the growing humanitarian catastrophe.

Israeli forces have killed about 241 and injured over 25,000 protesters, including women, children, disabled individuals, medics, and journalists, since the beginning of the Great Return March on Palestinian Land. Many have been shot in the back. Go here for ongoing updates on the protest, and here to learn the details of each death.

Ahmad Abu Marahil, 20, is one of the best boxers in Gaza.

Israeli occupation forces injured Abu Marahil three times during the Great March of Return protests, leading him to use a wheelchair.

Even before his injuries, Abu Marahil has dreamed of participating in championships in other Palestinian cities and around the world. But Israel has repeatedly barred him from leaving Gaza.

“I had the ambition to become a boxing champion and to represent Palestine abroad,” Abu Marahil told The Electronic Intifada.

“But the occupation was the obstacle,” stated Osama Ayoub, Abu Marahil’s coach.

Despite his injuries, Abu Marahil is determined to continue with the sport that he loves.