You Are Here: Home → UK silence on Israel’s detention of Palestinian children 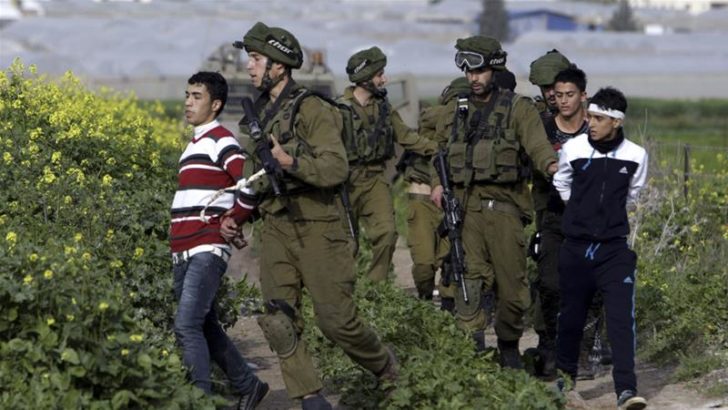 Some UK politicians are getting fed up with Israel’s disregard for international law on the rights of children. 6 years after a damning report on “Israel’s widespread and systematic ill-treatment of Palestinian child detainees,” next to nothing had improved, and Israel refused an additional follow-up visit.

But even as some are calling for tough measures, the UK voted against a resolution on Israeli accountability at the UN Human Rights Council last March.

In 2012, a report by a UK government-sponsored delegation of lawyers to Israel and the occupied Palestinian territories found Israel’s treatment of Palestinian children in military detention to be in breach of the Fourth Geneva Convention and the UN Convention on the Rights of the Child.

Six years on, however, and Israel has made only modest changes; according to government minister Alistair Burt, speaking in the Houses of Parliament earlier this year, Israel has implemented just one of 43 specific recommendations made by the lawyers.

At the time, Brad Parker, International Advocacy Officer at Defense for Children International-Palestine, told Al Jazeera the report was “a particularly useful tool that provided a cogent case study of the separate and unequal legal framework Israeli authorities operate in the occupied West Bank”.

“The report established the UK government as a critical voice on Israel’s widespread and systematic ill-treatment of Palestinian child detainees.”

But with so few substantial changes made to the system of Israeli military detention, many are calling into question the wisdom of a UK government strategy limited to, as Burt told Parliament in the same debate, “regular dialogue” with Israeli officials.

“It is time for ‘urging’ to be turned into concrete actions,” Parker said, actions “centred on ending physical violence against Palestinian children and holding Israel accountable to international law norms to end Israeli ‘exceptionalism’.”

There are currently some 300 Palestinian children in Israeli jails with Israel “the only country in the world that systematically prosecutes between 500 and 700 children in military courts each year”. About half of child detainees are held outside the occupied territories in violation of international law.

A Foreign Office spokesperson told Al Jazeera the issue “remains a human rights priority for the UK, and as such, we will continue to raise the matter with Israel”.

Citing “some improvements/progress by Israel”, such as the establishment of “separate juvenile courts”, the spokesperson added: “We are clear that there is still more to do, and that is why we continue to engage with the Israeli authorities, including offering them expert support.”

According to Israeli human rights NGO B’Tselem, however, changes made in recent years by Israeli authorities are “useful for propaganda” but “have not improved the protection of minors’ rights”. In a new report published in March, the NGO said the juvenile court “changed nothing of substance”.

“The changes that Israel has made remain painfully inadequate,” Labour MP Richard Burden told Al Jazeera, “and the international mechanisms that are available to require Israel to make more substantial changes on the specific issue of children in detention are sadly weak.”

However, if anything, the trend is going in the opposite direction. In February 2016, a follow-up mission by UK lawyers was cancelled because Israeli authorities withdrew cooperation. According to the Foreign Office, “there are no current plans for these lawyers to make a return visit.”

Meanwhile, despite acknowledging Israel’s continued ill-treatment of Palestinian children in military detention – in addition to other policies such as settlement expansion and home demolitions – the UK voted against a resolution on accountability at the UN Human Rights Council in March. The official explanation was this was “a vote against the council’s disproportionate focus on Israel”.

Burden, who chairs the Britain-Palestine All Party Parliamentary Group, described it as “more than disappointing” that the UK government decided to “prioritise making a political point” at the council “over holding Israel accountable for breaches of human rights”.

“It can only add to the culture of impunity which characterises the government of Israel’s approach to its responsibilities under International law,” he added.

According to Parker, whose colleagues work on the ground with Palestinian children and their families, “the UK government and others are choosing to react to the loudest ‘voice’ at the expense of increased protections or justice and accountability for Palestinian children.”

Questioned about the UK vote in Geneva, the Foreign Office spokesperson insisted that government officials “continue to raise children in detention and matters of accountability both bilaterally and multilaterally to hold Israel to account”, such as in Israel’s Universal Periodic Review in January.

Clearly, however, such an approach isn’t working. For parliamentarians such as Burden, a long-time campaigner on Palestinian rights, “it is important that the international community puts in to practice mechanisms which can hold to account both Israel itself and institutions which are complicit in breaches of international law.”

The Labour MP added “the establishment by the UN of a database of companies with commercial links to settlements illegally built in the occupied territories can be an important contribution to that”, and he urged the UK government to “drop its opposition to that initiative.”

Burden also said the European Union should insist “that Israel abides by the principles of the human rights that underpin the EU-Israel Association Agreement”.

For now, the UK government shows no signs of going beyond the current combination of occasional public criticism and “engagement.” But among MPs, from across party lines, there is clearly an appetite for a more robust approach.

Meanwhile, a separate motion tabled last month urged “the government to exert meaningful and decisive political, diplomatic and economic pressure on the Israeli authorities” to halt the demolition of Palestinian homes, a call to action that to date has attracted the support of more than 50 MPs.