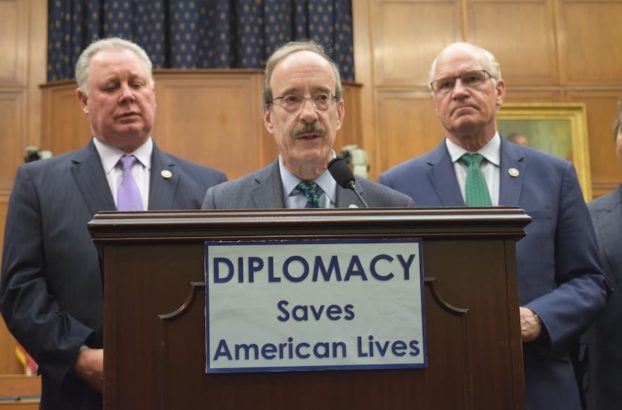 Many of the budget cuts are unlikely to be sustained; Israel lobby opposes them

The Trump administration has released its proposed budget in a document entitled “America First: A Budget Blueprint to Make America Great Again.”

Israel already gets more U.S. aid than any other nation, approximately $10 million per day. On average this is about 7,000 times more per capita than to others around the world.

Unlike all other aid recipients, Israel receives its aid in a lump sum at the beginning of the fiscal year.

Toner said aid to all other countries would be reviewed.

The second largest recipient has usually been Egypt, in an arrangement arranged in 1978 under former Secretary of State Henry Kissinger as part of a deal to convince Egypt to recognize Israel and abandon its efforts on behalf of Palestinians.*

Pro-Israel organizations, which have often promoted U.S. wars and interventions in the Middle East, are pushing for continued funding of international programs.

According to the Los Angles Times: “Congress is highly unlikely to approve the White House proposal, however, so the impact is still unknown.”

[Individuals and groups opposing the cuts are noted in boldface below]

The Times reports that Rep. Eliot Engel (D-N.Y.), ranking member of the House Foreign Affairs Committee stated: “Slashing our international engagement by even a fraction of [the amount proposed], at a time when we’re facing serious challenges around the world, would be an absolute disaster.”

The Jewish Telegraphic Agency (JTA) reports that “an array of Jewish groups and Democratic Jewish lawmakers expressed alarm” at the cuts.

The JTA article, by Ron Kampeas, reports that an official of the American Israel Public Affairs Committee (AIPAC) said in an email. “Our consistent position has been that, along with security assistance to Israel, we have always supported a robust overall foreign aid budget in order to ensure America’s strong leadership position in the world.”

In his article, “Jewish groups, pols say Trump budget is bad for Israel and other US interests,“ Kampeas writes:

“I wish the president would spend more time talking to the generals because they would tell you that pencils can be as persuasive as cannons and food can be as powerful as a tank,” she said at a news conference Thursday.

“The proposed draconian cuts in areas vital to executing U.S. foreign policy could adversely affect our national security interests by potentially creating more pressure on the American military while essential diplomacy is being undermined,” David Harris, the AJC CEO, said in a statement. “Deep cuts to the State Department, including in key educational and cultural exchange programs, will severely harm America’s ability to assert our interests and values abroad.”

The Reform movement’s Religous Action Center said in a statement that “U.S. interests are deeply entwined with a stable world order and U.S. engagement with the international community is vital to that effort.”

Centrist and left-wing pro-Israel groups have long argued that overall robust foreign assistance is healthy for the United States and Israel because it sustains U.S. influence.

Toner, the State Department spokesman, fielded a question from a reporter about whether the cuts would affect funding for U.S. defense assistance to Egypt and Jordan – policies that were written into Israeli peace deals with those countries and seen for years as critical to sustaining the peace. Toner deflected the question.

Kampeas reports that Nita Lowey,D-N.Y., the top Democrat on the House Appropriations Committee opposed the cuts, and “Democrats on the House Foreign Affairs Committee, led by Rep. Eliot Engel, D-N.Y., wrote a letter to House Speaker Rep. Paul Ryan, R-Wis., urging him to reject the cuts.”

Robert Bank, the CEO of American Jewish World Service, a human rights and anti-poverty advocate, called on the organized Jewish community to rally against the cuts.

“We call on members of the U.S. Congress to oppose this budget, and we call on American Jews and all Americans who are guided by the value of upholding the dignity of every person to oppose President Trump’s proposed radical cuts to the budget,” Bank said in a statement.

B’nai B’rith International, which advocates for international assistance and also focuses on assistance to the elderly in the United States, decried the budgets cuts in both areas. The organization noted a proposed 13.2 percent cut to the Housing Department, which would adversely affect the 38 buildings with 8,000 residents in the B’nai B’rith network.

“Lack of access to safe and affordable housing for all older Americans has deep ramifications for the health and welfare of so many,” it said in a statement.

Reform’s Religious Action Center also singled out proposed cuts to domestic programs in its statement. The budget’s “drastic reduction in funding for critical human needs, environmental protection and international aid programs abdicate the federal government’s responsibility to the American people it serves and others worldwide who depend on U.S. leadership,” its statement said.

Beginning next year, under a 10-year program proposed by the Obama administration and passed by Congress, Israel will receive an average of $3.8 bllion per year.

*Ha’aretz reported in a 2013 article: “there was no better friend in Washington for Israel [than Henry Kissinger] regardless of the sincerity of its other supporters on Capitol Hill.”

“Congress currently funds the program at $20 million per year. The vast majority of funds have gone to Jewish institutions since the program was launched in 2005… Groups like JFNA – which lobbied for the program – oppose such a rollover, saying smaller non-profits would get lost in the competition for the funds. Former President Barack Obama also proposed a rollover…”