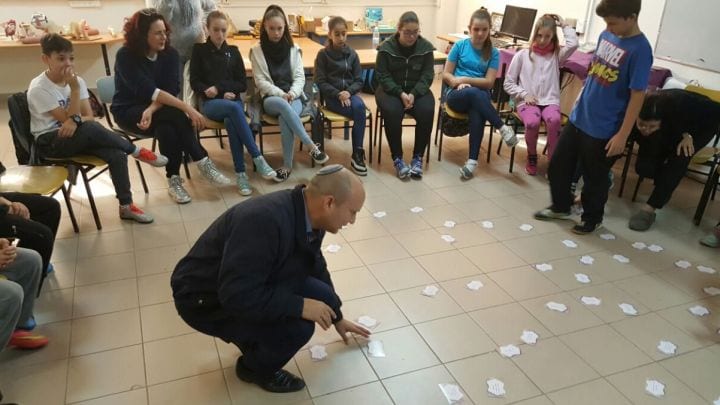 Or Kashti reports in Ha’aretz:

Students who want to take part in delegations going abroad are obliged to take an online government course which some parents and teachers say has a “blatant political agenda.” The course consists of film clips in which several speakers address the students and coach them about the messages they should express overseas.

Arab students are also required to take the course.

“The messages are simple and repetitive,” a mother of an 11th grade student from the central region says. “All the Arabs hate us, in fact almost the entire world hates us.”

In June 2016 the Education Ministry sent detailed instructions to schools about preparing delegations for trips abroad. “Students and youth in delegations overseas represent Israel and its society and serve as its ambassadors,” it said. “The students will represent Israel using the main messages taught in the course,” the directive says, noting the goal is “cultivating Israeli pride and a sense of calling among those going abroad.”

The directive is directed at 9th through 12th grade students slated to take part in delegations abroad, whether to conferences or international contests in mathematics, science and technology. It is also meant for delegations participating in programs for relations with Jewish communities in the world, twin cities and youth exchange and others. The courses do not apply to delegations to Poland.

Education Ministry sources said the project could include 220,000 students annually.

The course, which is part of a more comprehensive compulsory training session of 30 hours, consists of 11 study units, each made up of a film clip lasting several minutes. Advancing from one stage of the course to the next is conditional on passing a short test of four to five questions. At the end of each film clip the students must answer a multiple choice test. If they fail or abstain they will be disqualified from going on the trip.

The first speaker in the online course is Education Minister Naftali Bennett. He stresses entrepreneurship and innovation. (“Israel is a power of doing good to billions of people worldwide.”) He says the Arabs vote and are elected to the Knesset, noting “only in Israel is there such democracy. Emphasize this, because sometimes [they] throw out a word like apartheid.

He ignores the fact that the term refers mainly to the rights of Palestinians beyond the Green Line.

“The Arab states don’t want the tiny Jewish democracy to survive,” says Bennett. “Those guys sitting in London or the United States must be told that we’re the free world’s forward outpost in the global campaign against radical Islam.”

Asked what the most important part of advocacy for Israel is, Bennett says, “People think the content counts. I dispute that. It’s not the content but the smile, the politeness, the listening.”

But at the end of the unit, when the students are asked, “According to Bennett, what’s the most important thing in advocacy?” – the smile and politeness are not an option. The correct answer, taken from another part of the clip, is “framing, the way in which we frame the story.”

In the chapter “Israel in the Middle East,” Dr. Uri Resnik, legal adviser for deputy Foreign Minister Tzipi Hotevely, says “… Israel’s story in this region doesn’t begin in the 20th century but in the ancient era, in the time of the Bible and the patriarchs, about 4,000 years ago.”

The Bible also plays a central role in the unit dedicated to anti-Semitism. Gideon Bachar, the Foreign Ministry’s director of the campaign against anti-Semitism, tells the students “anti-Semitism definitely exists from the dawn of Christianity some 2,000 years ago, but it existed before that too. Some claim Haman’s desire to destroy all the Jews – think about it – is also a sort of anti-Semitism. Other cite Pharaoh’s hatred of the nation of Israel, that nation of slaves – as a kind of anti-Semitism.”
Pushing the ‘radical left-radical Islam’ connection

Bachar says the main roots of modern anti-Semitism are “Muslim anti-Semitism, radical right and extreme left.” The link he makes between “radical left organizations in Europe” and “radical Islam” is one of the main points in a lecture about BDS by Tali Gorodos from the Reut Institute.

In another unit, “Israel in the international media,” Foreign Ministry spokesman Emmanuel Nachshon says, “They poison children with hatred for Israel and for Jews. … They suckle this poison from age zero.” Later Nachshon speaks of the so-called lone-wolf intifada, on the background of a mixture of Israeli security footage from stabbing sites, Hamas broadcasts and ISIS executions. Some of these clips and pictures appear again in other parts of the course.

Apart from the emphasis on Arab-Muslim hatred (including the purported Iranian threat), the lecturers tell the students to stress Israel’s “creative energy” and developments and inventions in high-tech, medicine agriculture and other fields.
One of the test questions, “What challenges are you dealing with in Israel?” has four answer options – the Iranian threat, delegitimization, terror organizations from West, East, North and South, and all of the above. The correct answer is all of the above.

Another question is “Against whom is anti-Semitism directed?” and the right answer is: only toward Israel.

“The messages say everyone hates us already from the era of the Bible, which is also the only legitimization for Israel mentioned in the course,” an 11th grade student’s mother says.

“The Israeli-Palestinian conflict is presented with no context – no explanation is given for the Arab hatred and there’s no distinction between Israel and the West Bank,” she says.

Another parent says, “We’re used to the rightist worldview reflected in civics and history. … Now we have to agree to a blatantly political agenda so that the child can go to a science competition.”

A teacher accompanying delegations abroad says, “It’s hard to imagine what Arab students and parents feel. The Arabs appear in almost only negative contexts. There’s no reflection of coexistence. Bennett’s message in his clip is – the Arabs must be grateful for the right to vote and should keep quiet.”

An Education Ministry official said, “Many of the lessons play on students’ fears and prejudices and intensify them.”

Ministry spokesman Amos Shavit didn’t answer questions about the course, saying, “It was built with a view to the variety of populations in Israel, intending to train the students for going abroad. The claim that the course reflects a political view is groundless.”