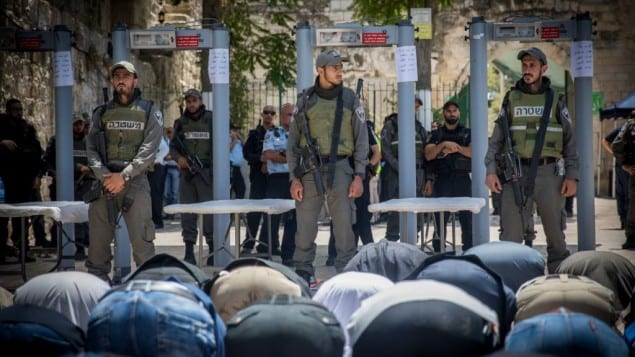 After the miserable failure of the security measures implemented unilaterally at the Haram al Sharif by Israeli police and the police minister, including metal detectors and surveillance cameras, which incited a Days of Rage and the killing of five Palestinians in the past two days, Israel is proposing a compromise of sorts.  The substance of the compromise is really no compromise at all.  According to the proposal, Israel would remove the metal detectors it installed after two police officers were killed by three Palestinian attackers last week.  In their place it would install chutes through which all worshippers would pass on their way to the holy site:

Jerusalem city workers, directed by police, would set up fenced-off “sleeves” at the entrances to the Temple Mount. Muslim worshipers would be required to file through these channels. Anyone seen as suspicious, on cameras…installed at the entrances, would be checked with a hand-held metal detector.

It was also possible that Israel would bar worshipers from carrying bags onto the Mount, the TV report said.

Thus, Israel security personnel would spy on the worshippers passing through the chutes.  And the Palestinians inside the channels would be like cattle on their way to slaughter.  Officers would target any particular individuals they wished to detain and force them to submit to a manual wand search.

While this plan removes some of the more provocative aspects of the original plan, it adds new elements that would be just as objectionable, if not worse.  Anyone who has seen the Gaza border crossing at Erez knows about the metal cages in which Palestinians are forced to pass through.  As they do, like sardines packed into a tin, they are monitored by anonymous security officials who observe them on video cameras.  Similarly, anyone they wish to stop is forced to leave the line and be interrogated individually.

Forcing the thousands of Muslim worshippers to wend their way through metal chutes or cages on their way to the third holiest shrine in Islam is not a recipe for coöperation.  Not to mention the manual wand searches of specific individuals, which would be just as objectionable as the original metal detectors.

Further, these new procedures would make it even more onerous for Palestinian Muslims to perform worship at their sacred site.  It would add frustrating waits for admission and demeaning treatment by Israeli officials, who would essentially control access to the site, thus violating the status quo.

Beyond all this, the news media reports on this proposal suggest that Israel once again, hasn’t consulted either with Palestinians or the Jordanian Waqf, which serves as the steward for the holy site.  Considering how many people have died fighting over this issue over the past week, you’d think that Israel would’ve gotten the message that unilateral actions on what it calls the Temple Mount are unacceptable.

In a related matter, Mahmoud Abbas announced that he would sever all official contact with Israel.  At first glance, this seemed like a strong protest by the PA against Israeli violence.  But one second glance, it’s not at all.  Security consultation between intelligence and counter-terror services on both sides would continue (though this report says otherwise).  This is a special bone of contention for Palestinians, who feel that the PA serves as Israel’s errand boy when it comes to maintaining peace for Israel.

All this means that Abbas continues to serve as a corrupt Palestinian quisling on Israel’s behalf. Nor does he earn any credit from the Israelis for doing so.  They continue to dismiss him as little more than a Palestinian terrorist.  The Israeli attitude of totally schizoid: Abbas is useful when his forces stop terror attacks; but when Palestine asks for anything or expects anything of Israel, the PA becomes a nest of terrorists who can’t possibly be a “partner.”

Richard Silverstein has been writing Tikun Olam, one of the earliest progressive Jewish blogs, since February, 2003.  It focuses on exposing the excesses of the Israeli national security state.