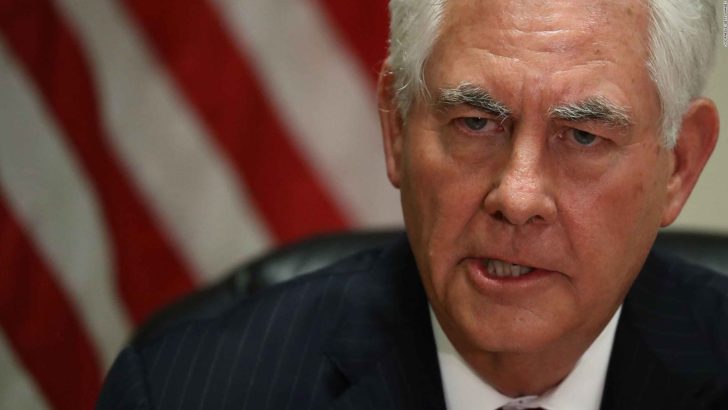 Secretary of State Rex Tillerson is under attack for a State Department report. While the report is largely focused on Israeli concerns, some Israel partisans call it ‘antisemitic and biased’ for two sentences near the end. Israelists have long opposed Tillerson.

The seven-page section “Israel, the West Bank and Gaza, and Jerusalem” is extremely Israel-centric. it is written almost entirely from an Israeli point of view and much of its information comes from Israel. It does not discuss Israeli military terrorism and largely fails to report Israel’s systemic oppression of Palestinians.

For example, it describes Israel’s barrier as a “fence” even though many portions consist of a towering concrete wall with guard towers built on Palestinian land. It fails to mention that numerous Palestinian homes are being destroyed and prime agricultural confiscated in its construction.

The report ignores the fact that the Israeli occupation of Palestinian land and creation of Jewish-only settlements is illegal under international law.

The report terms Palestinian groups resisting Israel’s illegal actions  “terrorist organizations,” despite the fact that resistance is a legally recognized right. It fails to report that Palestinians have killed far fewer civilians than have Israeli forces. (In 2016 at least 115 Palestinians and 12 Israelis were killed by someone from the other side, including 36 Palestinian children and one Israeli child – the names and details are here.)

The report omits the regular invasions of the West Bank and Gaza by Israeli forces who terrorize the population nightly, beating and imprisoning dozens of people every week, frequently stealing and destroying personal property.

Despite these and other similar omissions, some pro-Israel groups and individuals have vociferously condemned the report, largely on the basis of two sentences near the end.

On the last page of the section the report states:

“The PA has taken significant steps during President Abbas’ tenure (2005 to date) to ensure that official institutions in the West Bank under its control do not create or disseminate content that incites violence.”

B’nai B’rith International issued a statement saying: “It is astonishing that State is parroting the false Palestinian narrative. If it were not released by the State Department, it would be easy to mistake the inflammatory and accusatory language as coming directly from the Palestinians.”

The Zionist Organization of America blasted the report and demanded that Secretary of State Rex Tillerson resign.

The monograph also condemned what it claimed were “false and exaggerated claims of Israeli ‘settler’ violence against Palestinian Arabs, based on fabrications by the Soros-funded discredited anti-Israel NGO Yesh Din and the UN.”

The report had stated that suspected Israeli settlers had conducted two arson attacks on homes of relatives of the Dawabsheh family, whose house had been set on fire by settlers in 2015 that “resulted in the deaths of three Palestinians.”

The deaths were of an 18-month-old and his parents. Israeli media reported that Orthodox Jewish wedding-goers celebrated the killing, one of the dancers repeatedly stabbing a photo of the 18-month-old victim (video here).

In his monograph Klein praised Illinois Congressman Peter Roskam, co-chair of the Republican Israel caucus and one of Israel’s most dependable cheerleaders, for writing a letter to Tillerson, asking the Secretary to correct the report’s alleged “numerous mischaracterizations.”

Klein had opposed Tillerson from the beginning, saying: “In general, people who have led oil companies are not that friendly to Israel. That concerns me.”

Klein’s concerns were shared by others, as reported by the Forward article “Trump’s Pick of Exxon’s Rex Tillerson as Secretary of State Spooks Jewish Groups.”

The article reported that the groups “voiced general suspicion of oil executives, who they said often have longstanding relationships with Arab leaders, and are generally not attuned to Israeli interests.”

A number of reports accuse Tillerson of being harder on Israel than Obama was.

Adam Eliyahu Berkowitz, who immigrated to Israel and lives in the Golan Heights, writes in Breaking Israel News that the new report used ” language even more anti-Israel than was used in last year’s report.”

Jordan Schachtel, who previously worked for The Israel Project, reports in Conservative Review: “Rex Tillerson’s State Department added blistering anti-Israel language to this year’s ‘Country Reports on Terrorism,’ adopting a tone not seen even during the hostile Obama era.”

According to Schachtel: “Last year’s report under Obama said the Palestinians argued that terrorism is sometimes caused by frustration over ‘occupation.’ But that report was much less accusatory because it makes clear that the position is reflecting the views of Palestinian officials, and not the U.S. government.”

An earlier article by Schachtel complained that “The secretary of state has been perhaps the most hostile Trump cabinet member to the Jewish state.”

Schachtel reported that during a conversation with reporters, Tillerson had “refused to recognize that the holiest site in Jerusalem is part of Israel. The Western Wall is ‘in Jerusalem,’ Tillerson told reporters, stating the obvious geographic fact, but refusing to note Israel’s sovereignty over it.” 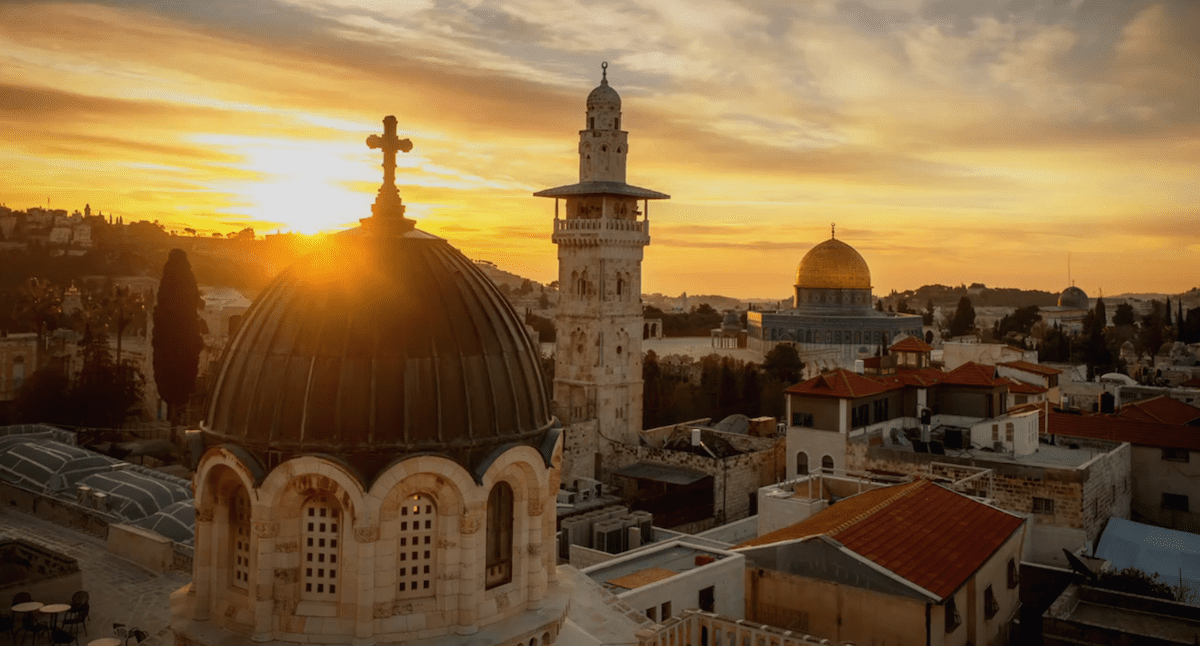 In point of fact, Jerusalem is not part of Israel. The State Department issued this statement:

“Since 1948, every administration has taken the official position that no state has sovereignty over the city of Jerusalem. The status of Jerusalem is an issue that should be resolved in final status negotiations between the Israelis and Palestinians,” a State Department official told Conservative Review last week.”

Schachtel writes that Tillerson is “part of a contingent that is advising President Trump not to move the American embassy in Israel from Tel Aviv to Jerusalem.”

Trump national security adviser H.R. McMaster had also refused to answer questions about Jerusalem, commenting, “That’s a policy decision.” Press Secretary Sean Spicer would also not say that Jerusalem’s Western Wall is in Israel. (Spicer has since resigned, and McMaster may also be on his way out.)

In an IsraelNationalNews column “The Jews did not start this, Mr. Tillerson,” New York-based author Jack Engelhard writes: “President Trump needs to have a talk with Rex Tillerson. Tillerson’s State Department has issued a report that blames Israel for…EVERYTHING.

“Nobody saw that coming. Well I sure didn’t. Love Trump. Tillerson, not so much, even from the start.”

Engelhard complains that the problem goes beyond the State Department: The World Council of Churches feels the same way as the State Dept… likewise the UN…and the EU…and the NY Times…and the entire media apparatus…here, there, everywhere. They say the Temple Mount flare-up is also our fault. They say everything is our fault.

“There are days when the entire world cares about nothing besides the Palestinian Arabs.”

Engelhard, who is a recipient of the Ben Hecht Award for Literary Excellence, continues: “Are the Jews happy? Silly question. Nobody talks about that and nobody cares. We are on our own.”

(Engelhard is the author of the bestselling novel and Hollywood movie Indecent Proposal.)

Tillerson has also been less hostile to Iran than Israel hardliners would like, certifying that Iran is complying with the 2015 nuclear deal. AIPAC has endorsed harsher treatment of Iran, which has long been seen as a threat to Israel.

There are indications that some White House and Congressional insiders are attacking Tillerson over these stances and of his retention of Obama officials in the State Department.

According to an anonymous source quoted by Adam Kredo in the pro-Israel Washington Free Beacon: “Some really good people have tried to clean house, but every time anything got going Tillerson went to the president personally to protect the Obama holdovers.”

Recent news reports suggest that Tillerson may be on his way out for these and other actions.