You Are Here: Home → The Gaza Prison Uprising Continues: “The Friday of Tires,” another sign of determination by Palestinians

The Gaza Prison Uprising Continues: “The Friday of Tires,” another sign of determination by Palestinians 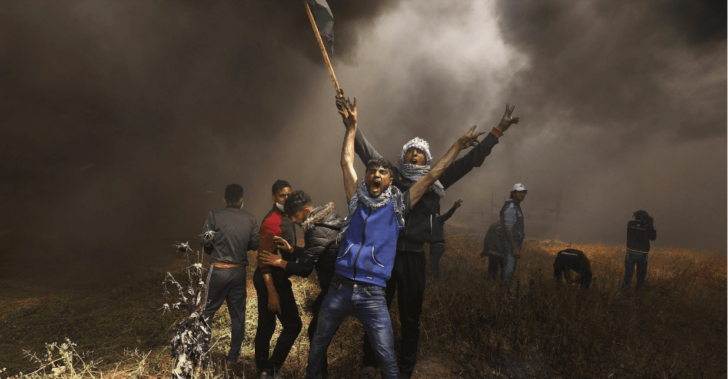 Palestinian protesters in Gaza on Friday. (photo by Mohammed Salem)

Crowds of young men went to the border area, setting tires on fire to create a smokescreen to obstruct the vision of Israeli snipers. They were met with gunfire and tear gas as they hurled stones at the heavily armed Israeli soldiers backed up by tanks and warplanes. Israel, which controls all of Gaza’s border crossings, airspace and waters, imposed a ban on the entry of tires, and Israeli forces brought huge fans and massive water cannons to extinguish the fires…

Piles of black smoke billowed over the eastern parts of Gaza in the second week of the massive protest dubbed The Great March of Return.

Journalists and paramedics were all on standby to report and rescue the victims on Friday; the weekend in Palestine.

As expected, casualties were reported on the Palestinian side, as defenseless civilians approached the border fence facing sharpshooters and snipers.

It was an asymmetrical confrontation, but despite that Palestinian protestors approached the border to take part in the protest knowing they could be gunned down like sitting ducks.

The number of deaths were less than last week’s 28 lives, with eight killed this week up to the moment of writing this piece, in addition to over 1000 injuries including a number of journalists and paramedics, some seriously wounded.

The protestors came out in their thousands marching toward the Gaza-Israel border fence from the early hours of the second Friday to take part in the ongoing 6-week long planned rally, in protest against Israel’s military occupation of Palestinian land as well as the ongoing 11-year strangling siege imposed on the impoverished densely populated costal enclave of nearly 2 million inhabitants.

Israel’s war on tires and people

Soon after the end of Friday prayers, crowds of young men made their way to the border area, setting fire to tires in order to create a smokescreen to obstruct the vision of Israeli snipers. Those protestors were met with gunfire and tear gas canisters as they hurled stones at the heavily armed Israeli soldiers backed up by tanks and warplanes. As a result of burning the tires, Israeli authorities, who maintain full control of Gaza’s border crossings, airspace and waters, decided to impose a ban on the entry of tires as a reprisal. The burned tires succeeded in creating a smokescreen which prompted the Israeli forces to bring huge fans and massive water cannons to extinguish the fires, in order to improve the level of vision and monitor any attempt to infiltrate the border and surprise the soldiers.

The protestors, who also demand the right of return to where their parents and ancestors were driven out back in 1948 in historic Palestine, say they have nothing to lose in light of the total failure of the so-called peace process that has lasted for over 2 decades. They lack hope and are burning with frustration.

Hamas, which is the de facto ruler of the Gaza Strip, refrained from preventing protestors from reaching the so-called 300m buffer zone giving the masses the chance to express their anger. As a matter of fact, not all of Gaza’s population support or are happy with the practices of Hamas when it comes to freedoms and its mismanagement of the economy. And despite many failed rounds of national reconciliations with the rival “Fatah” political faction – President Abbas’s party – ordinary Palestinians put the blame on Israel for its prolonged occupation and collective punishment of Gaza that shares a border with Egypt and has a 45 km coast on the Mediterranean.

Asad Abu Sharekh, the spokesperson of the march, said that the protest had been endorsed by professionals such as academics, lawyers, doctors, civil society organizations and students as well as ordinary Palestinians, whether those who are registered with the UN as refugees or those who are originally Palestinians who lived in Gaza before “The Nakba”, the catastrophe of 1948 when Israel came into existence at the expense of the Palestinians.

However, Israel justified its excessive response by describing the protest as a “riot,” accusing Hamas of leading the protest, holding it responsible for the consequences and threatening to retaliate by carrying out attacks inside Gaza.
To serve Tel Aviv’s cause, a post was published on the Facebook page of the Israeli Foreign Affairs Ministry urging foreign reporters to read a long statement. The statement highlighted that Hamas was established in 1987. It said the Islamic resistance organization is the problem, not the ongoing seven-decades long Israeli military occupation nor the endless human rights violations Israel has been committing for 70 years.

On the Palestine side, an army of jobless graduates took to social media where some have managed to establish themselves as trusted citizen journalists, relying on social media platforms such as Facebook, Twitter, YouTube and WhatsApp. Their activism does not only focus on the repercussions of the Israeli attacks but also criticizes Palestinian officials whether they be the secular party of Fatah that rules the West Bank or the Islamic party of Hamas in Gaza for their failure to provide for the needs of the population under their control.

Many videos of unarmed protestors shot dead last week as they were running, walking or even praying went viral. Some of those clips were filmed by ordinary protestors who used their smart phones.

Following last week’s massacre, condemnations by some Western governments and officials as well as human rights organizations were made, urging Israel to refrain from using disproportionate force. But despite these calls casualties were reported again.

Thanks to the rise of the internet and technology, Palestinians have a voice as facts on the ground cannot be twisted anymore by the occupying force or by some Western media corporations. [Israel is attempting to cut this off.] Palestinians say that they are grateful for this as prior to the establishment of the self-rule Palestinian Authority in 1994 their narrative was not given attention as the world was busy with the consequences of WW2 and then the collapse of the Soviet Union.

Today’s protest was dubbed “Tire Friday” and dominated the online discussion amongst the Palestinians of Gaza a day before the protest, with many against burning tires and polluting the environment, while others deemed it was necessary to protect the protestors. Israeli officials also communicated their messages to Gazans online urging them to be wise and protect the environment. Those in favor lashed out in a mocking response as if the white phosphorus Israel used during three wars on Gaza were environmently-friendly, not to mention the other internationally prohibited weapons used against Gaza in 2008, 2012 and 2014.

The protests are slated to continue until May 15, the day of Nakba which marks the 70th anniversary of the dispossession of about 750,000 Palestinians who were forcibly displaced from their homes and towns and made refugees scattered around the world until this day.

If Americans Knew contributor Yousef Alhelou is a Palestinian journalist based in London who has been reporting on Gaza since 2007 for diverse media outlets. A United Nations Fellow Alumnus, he received an MA in International Relations, and was awarded a research fellowship in Journalism at the department of Politics and International Relations at University of Oxford.