You Are Here: Home → TAKE ACTION: Tell Congress to demand Israel allow medicines into Gaza to prevent 100s of amputations! 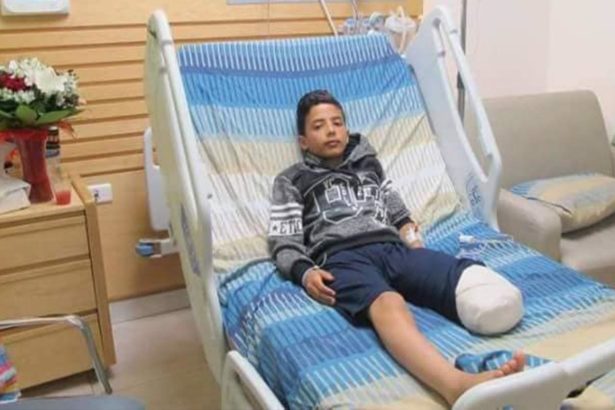 12-year-old Abdel Rahman Nawfal after an Israeli soldier shot him on April 17, 2018. The bullet reportedly exploded below his knee, causing irreparable damage to the tissue. Nawfal was one of at least 500 Gazan children who had been shot by Israeli forces in the past month. (Source)

Take action now that could save hundreds of men, women, and children shot by Israeli forces from amputations. Use this form to email and phone your Congressional representatives. Demand that Israel allow all medical supplies into Gaza, and that it end its illegal blockade now!

A top UN official reports that Israeli soldiers have shot 7,000 demonstrators in Gaza over the past year. Over 120 people have had arms or legs amputated, including 20 children. Now 1,700 more people with shattered limbs may need to have amputations if Gaza doesn’t receive emergency help. Use the form below to contact your Congress members!

While US news reports and the Israel lobby emphasize the rockets fired by Palestinian resistance groups, the fact is that Israeli violence began BEFORE rockets were fired from Gaza, and Israeli forces have killed massively more civilians.

In the past year, Israeli forces killed 193 Palestinians in Gaza, and Gazan resistance fighters killed 6 Israelis.

Israel has perpetrated a strangling, illegal 12-year-blockade on Gaza, preventing numerous medical supplies, building materials, and other commodities from reaching Gaza’s almost 2 million men, women, and children. This one of the longest blockades in modern history and has caused an unconscionable humanitarian crisis in Gaza.

The Red Cross has called for the blockade to be ended, saying it violates the Geneva Conventions.

Use this form to demand that Israel permit medical supplies to enter Gaza, and to end its cruel blockade. Your action could save hundreds of Gazans from having arms and legs amputated!

SAVE THE CHILDREN: Gaza protests one year on: Almost 3,000 children required hospital treatment

Amputated Dreams in Gaza..Injured siblings harvest wheat despite their injury

Timeline of deaths of Palestinians and Israelis