You Are Here: Home → Shlomo Sand: How Israel Went From Atheist Zionism to Jewish State 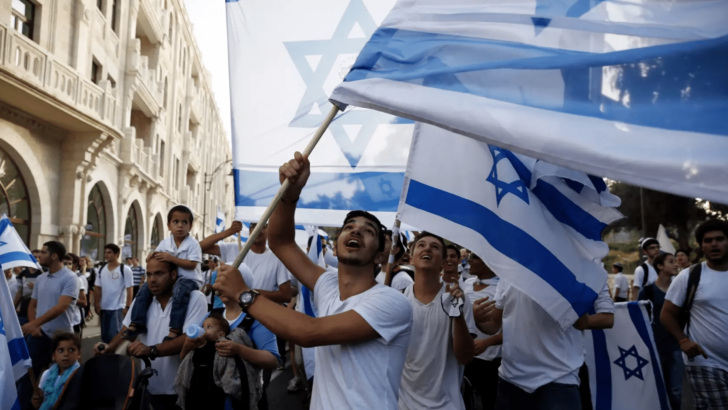 People wave Israeli flags as they take part in a parade marking Jerusalem Day, in Jerusalem May 28, 2014. Credit: REUTERS

Zionism – the idea of a “Jewish State” – was at first fully secular and socialist, but how to define “a Jew” in a way that includes both the religious and the nonreligious (and no Arabs)?

Originally, due to the sweeping opposition of the rabbis, Theodor Herzl was forced to transfer the First Zionist Congress from Munich to the Swiss city of Basel.

Eventually, religious features were appropriated and nationalized: the “need” for more land became a holy pact with God; Israel is only for Jews, not “all of its citizens.”

by Shlomo Sand, reposted from Ha’aretz

It’s sad to read the recent complaints of Israeli intellectuals about the collapse of the only Jewish democracy in the Middle East. The secular melancholy is likely to arouse identification among readers – but not to enlighten them, alas.

It sometimes seems that words are nothing more than props in the hands of talented circus acrobats. For example, there is a profound connection between the terms secularism and atheism, but they are by no means congruent or identical. Among Israeli intellectuals, and not by chance, the differences between the two are far more vague than in other areas of the national discourse.

For example, a person can be secular in the political sense of the word and believe in a higher power (like the late Prof. Yeshayahu Leibowitz), or an atheist who is not really secular (like the late Prime Minister David Ben-Gurion). Secularism is – not only, but mainly – a political viewpoint, whereas atheism is firstly a philosophical viewpoint.

In the historical development of liberal democracy – and, in effect, in the growth of some of the authoritarian democracies, too – secularism meant the separation of religion and state. Or, to be more precise, a severance of the traditional Gordian knot between political society and the Church (or churches).

It’s true that the secularization of the public-political space was never total – see, for example, the flags of Sweden and Norway – or the enduring relationship between the United Kingdom and the Anglican church. But legislation regarding marital status, neutrality on issues of belief and ritual, public education without the intervention of the priesthood, and defining citizenship and nationality without religious criteria, all became the norm in most countries in the 20th century (with the exception of those in the Middle East and North Africa).

Zionism as a national movement that rebelled against historical Judaism was mainly atheistic. Most of its leaders and activists ceased believing in redemption through the coming of the Messiah, the long-standing essence of Jewish belief, and took their fate into their own hands. The power of the human subject replaced the power of the omnipotent God.

The rabbis knew that, and were terrified – and, therefore, almost all of them became avowed anti-Zionists. From Hasidic rebbes Sholom Dovber Schneersohn, the Admor of Lubavitch (Chabad) and Yehudah Aryeh Leib Alter (the Admor of Gur) to leading U.S. Reform Rabbi Isaac Mayer Wise, founder of the Reform Central Conference, mitnagdim and Hasidim, Orthodox, Reform and Conservative, all saw the rise of Zionism as the end of Judaism. Due to the sweeping opposition of the rabbis of Germany, Theodor Herzl was forced to transfer the First Zionist Congress from Munich to the Swiss city of Basel.

But beginning with the first stages in the consolidation and settlement of the Zionist movement, it was forced to meticulously sort and thoroughly nationalize some of the religious beliefs in order to turn them into nation-building myths.

What is a Jew?

For the atheistic Zionists, God was dead and therefore the Holy Land became the homeland; all the traditional holidays became national holidays; and Jerusalem stopped being a heavenly city and became the very earthly capital of an eternal people. But it wasn’t these decisions, or many others, that prevented secular nationalism from serving as the foundation for the establishment of the State of Israel.

The main reason for Zionism’s inability to establish a secular entity with a constitution – in which religion is separated from the state – lay elsewhere. The problematic nature of defining the “Jew” according to secular criteria – cultural, linguistic, political or “biological” (despite all efforts, it’s still impossible to determine who is a Jew by means of DNA) – was what eliminated the option of a secularized identity.

For example, in 1918, Ben-Gurion – the future founder of the state – was convinced, as were many others, that most of the population of the Land of Israel had not been exiled, but converted to Islam with the Arab conquest, and therefore was clearly Jewish in origin.

In 1948, he had already given up on this confused and dangerous idea, and instead asserted that the Jewish people had been exiled by force and had wandered in isolation for 2,000 years. Shortly before that, he presented the weak and depleted religious Zionist stream with a valuable gift: In the famous “status quo” letter, all the laws pertaining to marital status, adoption and burial were given over to the Chief Rabbinate. The fear of assimilation was the nightmare shared by Judaism and Zionism, and it won out in the end.

Within a short time, the principle of the religious definition was accepted in identity politics: A “Jew” is someone who was born to a Jewish mother or converted, and is not a member of another religion. In other words, if you don’t meet those conditions, you cannot be a part of the revival of the “Jewish people,” even if you adopt Israeli culture, speak fluent Hebrew and celebrate on Israeli Independence Day. It’s a very logical historical process: Since there is no secular Jewish culture, it’s impossible to join by secular means something that doesn’t exist.

And then came 1967. The State of Israel expanded significantly, but at the same time a large non-Jewish population was also brought together under the country’s muscular Jewish wing. The Jewish constraints also had to be tightened in the face of the confusing misunderstandings that were liable to be created as a result of the territorial-demographic booby trap.

From now on, more than ever, the emphasis had to be on the heading “Jewish” – in other words, the state belonging to those who were born to a Jewish mother or converted according to Jewish law and, God forbid, not the country of all its citizens.

The justifications for the appetite for renewed settlement also relied less on the Zionist demand for independent sovereignty and far more on the biblical idea of the Promised Land. That’s why it is no coincidence that the clerical establishment became increasingly inflated at the same time.

Like socialism and political-civil nationalism, the crisis of secular ideologies in the face of capitalistic globalism also created an inviting atmosphere for the rise of “premodern” identities, mainly ethno-religious but also ethno-biological as well. And if these identities have yet to achieve total victory throughout the Western world, in other corners of the planet – from Eastern Europe to the Third World – they have chalked up considerable achievements. In Israel, due to the previous ethnocentric background, the new-old identities have become very popular. The synthesis of Zionism and socialism has disintegrated totally, making way for a winning symbiosis of religion and strong ethno-nationalism.

For pseudo-secular Zionists – and not only for them – this new situation is difficult and oppressive. But because they do not have answers to the identity problems and contradictions that have been part of Israeli society since its inception, we can apparently anticipate additional catastrophes.

The writer is the author of “Twilight of History” (Verso)

The history of Zionist collusion with Nazis

Introduction: What does the Bible really say about modern Israel?