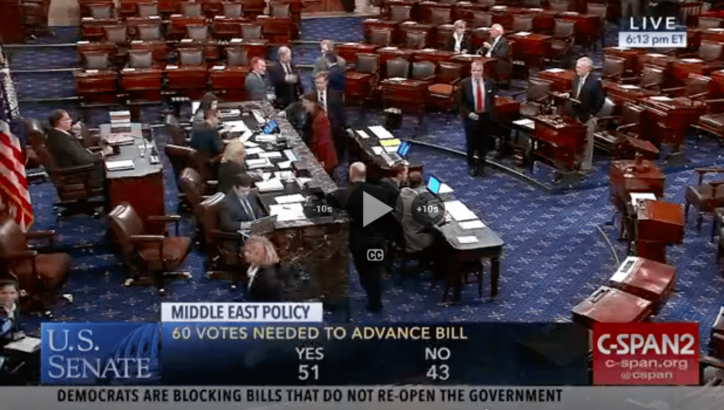 Senate Republicans again failed to advance legislation that would give Israel a $38 billion package, combat the international boycott of Israel over its human rights abuses, sanction Syria, and take other pro-Israel actions.

Democrats oppose taking up the bill until their legislation to address the government shutdown is brought to a vote.

The final vote was 51 to 43. Since moving the bill to a vote requires 60 aye votes the measure failed.

The bill has been promoted by the Republican Jewish Coalition, which sent out an email earlier today calling it a “crucial bill” and urging supporters to pressure potential swing Senators to vote for the bill.

In the email, RJC Executive Director Matt Brooks told supporters to contact Gary Peters (D-MI) and Tina Smith (D-MN) who are “headed towards tough reelection campaigns” and Cory Booker (D-NJ), who “has his eyes set on the White House.”

All three continued to vote against the measure.