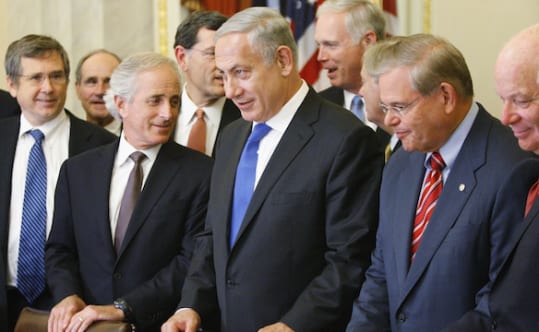 The U.S. Senate overwhelmingly passed a bill that would impose new sanctions on Iran.

The measure adding sanctions on Iran due to its ballistic missile program, support for terrorism and human rights breaches [sic] passed Thursday in a 98-2 vote. It complies with the Iran nuclear agreement reached in 2015, which put restrictions on the country’s nuclear program in exchange for sanctions relief.

Sen. Bob Corker, R-Tenn., introduced the bill, which now must pass in the House of Representatives and be signed by President Donald Trump before being enacted. Only Sens. Bernie Sanders, I-Vt., and Rand Paul, R-Ky., voted against it.

A day earlier, the Senate voted to adopt an amendment to the bill that would expand sanctions against Russia, CBS News reported.

The Times of Israel reports: “Both the American Israel Public Affairs Committee and J Street — two organizations that have rarely seen eye to eye on US policy toward the Iranian challenge — have hailed the measure.

“AIPAC ‘commended’ the Senate on Thursday for adopting the bill and J Street had previously lauded legislators after its committee passage for ensuring the text did not violate the Iran deal.”

The Times reported: “Meanwhile, at the Orthodox Union Advocacy Center’s lunch on Capitol Hill, both Cardin and Minority Leader Chuck Schumer (D-New York) said the bill was a sign of bipartisan unity in Washington when it comes to Israel’s security.”

The article noted: “The day before its vote in committee, former secretary of state John Kerry —who helped broker the Iran nuclear deal forged in July 2015 — went on a “tweetstorm” against the bill, advising lawmakers to ‘tread careful’ on matters related to the accord.”

AIPAC had announced at its annual policy conference in March that it would push for legislation against Iran.

The bill is S.722 – Countering Iran’s Destabilizing Activities Act of 2017. It has 62 cosponsors.