You Are Here: Home → Making A Sexy Pitch For Israel [video] 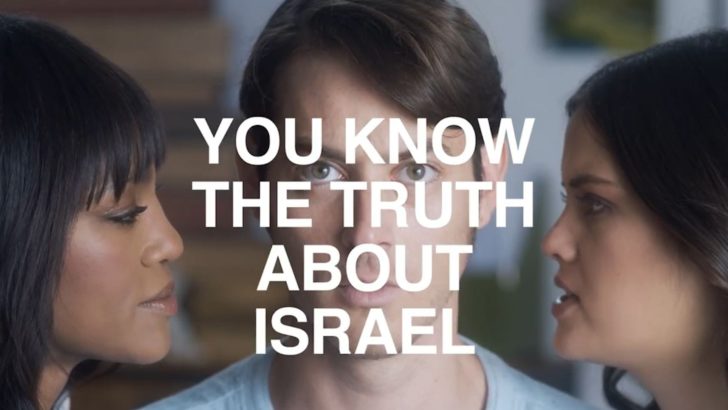 From The Forward, originally published by Haaretz

“Welcome to BDS News! Where we pretend to care about Palestinians, but really just want to see Israel disappear!”

Thus opens one of the videos the Israeli government hopes will go viral in what is billed as a new large-scale “cyber second strike” campaign. Supported and spearheaded by the Ministry of Strategic Affairs, the campaign enlists Israel’s supporters as foot soldiers against online efforts to “demonize” and “undermine” the country’s legitimacy.

The campaign, branded as 4il.org under the slogan “Stop the Hate,” is being paired with a mobile application developed by a trio of organizations in the U.S. and Israel. Two of them – the Israeli-American Council and the Maccabee Task Force – are nearly solely funded by American Jewish billionaire and casino magnate Sheldon Adelson, who is also Prime Minister Benjamin Netanyahu’s buddy. The third partner is the Interdisciplinary Center in Herziliya, to which Adelson is a major donor.

The app – geared to digitally-aware millennials – turns Israel advocacy into a competitive game  in which young defenders perform “missions” on various social media platforms, earning points and badges. The missions include sharing and retweeting positive news about Israel, reporting and complaining about designated YouTube and Facebook posts to the platform’s companies, signing online petitions and even emailing UNESCO’s director general to ask that his organization “stop their bias towards Israel.”

The initiative was unveiled with fanfare last week in New York City at the Salute to Israel Parade by Minister of Strategic Affairs Gilad Erdan, who promoted the project as being an “Iron Dome of Truth.”

“The State of Israel is under constant attack by de-legitimizers working to demonize Israel online and undermine our legitimacy as the nation-state of the Jewish People,” Erdan said in his statement announcing the project, calling it an “international effort to unite Israel’s supporters around the globe” in what he called a game-changer in defending Israel online and around the world.

While this is not the first time the Israeli government is involved in online advocacy, the new effort has more aggressive messaging than in the past – promoting positive messages about Israel, but also strongly encouraging people to post negative comments against posts determined to be “lies” and “fake news,” and to lobby platforms like Facebook and YouTube to take down material deemed damaging to Israel’s image. On the act.il app’s instructional video, a perky blonde blogger named Stephanie explains that there are “many groups that try to delegitimize Israel online.” Icons for various pro-Palestinian groups then pop up in the background. “The key to counter their efforts in the palm of your hand,” Stephanie says. She then explains how to “complete the missions” on the app, promising that each time one is done, the user will be “rewarded with points that get you cool prizes.”

The targets of the “missions” are widespread. One involves going on a website called Lifezette and commenting on an article headlined “Courtney Love Calls Out Pro-Palestinian ‘Feminist.’” The app actively cheers and coaches users on how to complete their mission: “Courtney Love-Cobain called out Linda Sarsour for her false ‘feminist’ agenda. Leave a comment to show some support for Courtney!” and continues, “Get Creative! It is always best to say your opinion in your own words. Try to come up with something nice for Courtney Love-Cobain for uncovering Linda Sarsour’s janus-faced character.”

Lifezette is a conservative website that has been criticized for promoting conspiracy theories and publishing fake news stories.

Another “mission” calls on the user to “Stop the Incitement!” by commenting on a video shared by Al Jazeera English, “where Hanan Ashrawi (PA legislator) refers to Israel and Palestinians as ‘master’ and ‘slave’.” The app urges, “Let’s call out this rhetoric for what it is: demonization and incitement,” adding, “don’t be shy.”

The Al Jazeera video, is, in fact, a promo of an upcoming special that debates the one-state versus the two-state solution to the Israeli-Palestinian conflict on the anniversary of the Six-Day War. The special features Palestinian, Israeli, and American human rights activists and Haaretz columnist Gideon Levy, along with Ashrawi.

The Ministry of Strategic Affairs’s website that accompanies the app offers additional material for sharing on social media, including the satiric “BDS News” sketch, which presents a harsh skewering of young people involved in human rights activities abroad, presenting them as naive puppets of malicious activists set on destroying Israel.

Another video the campaign suggests to share also portrays young American college students as gullible consumers of anti-Israeli lies in a “Fake News Street Quiz,” where they are asked to react to false stories in which Israel looks bad – and eagerly do so. skip – ‘BDS Fake News’

The central video promoting the campaign stars former Miss Israel Titi Aynaw and Israeli actress Ariel Mortman. Scantily clad in a series of tight outfits, the two women stalk a young man throughout his day and whisper seductively in his hear that “you know the truth about Israel” and that he must “tell the whole world the truth” about the “false and biased coverage online and in the media.”

The fact that all of the campaign’s materials are provided in Hebrew as well as English points to an effort at ideological advocacy geared toward an Israeli audience as well as an international “hasbara” effort.

The project is the latest initiative of a ministry described in an in-depth report in Haaretz as a place whose “internal terminology comes from the world of espionage and security; its leading figures appear to see themselves as the heads of a public affairs commando unit engaged in multiple fronts, gathering and disseminating information about people they define as ‘supporters of the delegitimization of Israel.’”

In March, it was revealed that Erdan had proposed setting up a database of Israeli citizens who support the BDS movement, which raised questions about the boundaries of freedom of expression and the government’s use of its resources to surveille people of differing opinions.

Attorney General Avichai Mendelblit opposed the proposal and Deputy Attorney General Avi Licht distributed a legal opinion that Erdan’s ministry had no authority to collect such information on citizens, stressing that this was forbidden even if the information was solely from open sources like Twitter and Facebook.

Top photo: A screenshot from one of 4IL’s videos.