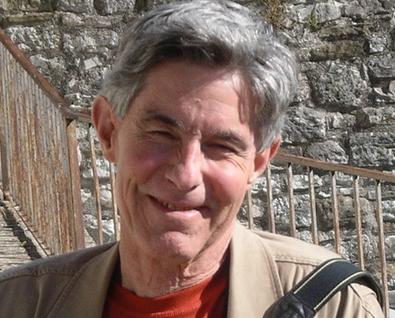 A memorial service was held yesterday for The Rev. Dr. Robert Cotton Fite, who had had long worked for Palestinian rights. It is important to remember and celebrate a courageous individual who was committed to justice and human rights for all.

Below is Rev. Fite’s obituary. He will be profoundly missed.

The Rev. Dr. Robert Cotton Fite died on August 15, 2017 from a cerebral hemorrhage after a fall at home. In life, Cotton was a beloved Episcopal priest, clinical psychologist and peace activist, as well as a loving husband, father, grandfather, uncle, great uncle, and dear friend to many around the world. He died painlessly and peacefully, surrounded by his family and caregivers.

Cotton was a remarkable person, known for his tireless and passionate dedication to peace, justice and service, as manifest through his preaching, his counseling work, and most recently, his advocacy in support of the Palestinian cause. He was a gifted preacher who inspired others with insight, candor and soulful inquiry. His leadership, both within the communities he served and on behalf of matters in the larger world, provoked healing and change, and his legacy will continue to inspire others who work toward those goals. Cotton will be greatly missed for his thoughtful perspective on myriad issues, for his unfailing kindness and good humor, and above all, his capacity for hope.

At the time of his death, Cotton was Priest Associate at St. Luke’s Episcopal Church in Evanston, IL, where he had been serving for almost 40 years. He was also serving his eighth year as board chair of Seraj Library Project, an organization created to build children’s libraries in rural Palestinian villages. During his tenure at Seraj, Cotton was gratified to watch these libraries become vibrant centers of refuge and community renewal.

Cotton’s voice was valued across the ecumenical and interfaith spectrum. Working faithfully and persistently within the Episcopal denomination, he was the first convener of the Palestine Israel Network (PIN) of the Episcopal Peace Fellowship and was a longtime member of the Chicago Faith Coalition. Cotton longed for a peaceful and just resolution to the Israeli/Palestinian conflict. Since 2003 when he made his first trip to Israel-Palestine, he devoted himself to active engagement in the Palestinian struggle for justice, educating, leading workshops and speaking to congregations and groups both locally and nationally on this issue. He was among the founding members of Kairos USA and supported many other initiatives in this cause, returning many times to lsrael-Palestine, where he had developed deep friendships and connections.

Cotton was born in 1938 in New Rochelle, New York to Mary Josephine Cotton and Robert Hunter Fite. He grew up in South Florida with his older brother, Peter, and later became a boarding student at Gilman School for boys in Baltimore, MD, where early mentors fostered Cotton’s ardent quest for learning. At Gilman and later during his undergraduate years at Williams College in Williamstown, MA, Cotton formed a set of friendships that served as an invaluable touchstone throughout his life. His time at Williams also set in motion the personal and intellectual direction that would shape his life as an activist priest. Upon graduation from Williams college in 1960, Cotton spent a year at Union Theological Seminary in New York City, later receiving his M.Div. at General Theological Seminary, also in New York. Cotton was ordained as a priest in the Episcopal Church in Philadelphia, PA. He served parishes in Philadelphia, PA and Princeton, NJ, and spent three years as urban missioner for the Diocese of Pennsylvania. In the late 1970’s he entered a joint program at Northwestern University and Garrett-Evangelical Theological Seminary in Evanston, IL to train as a pastoral counselor, earning a PhD in 1981. Cotton joined the clinical staff at the Pastoral Counseling Center at Lutheran General Hospital in Park Ridge, IL in 1979 before becoming the Center’s director from 1985 to 2002. His colleagues remember him fondly for his authenticity, his skillful leadership through an era of corporate change, and his exceptional work with patients.

Cotton is survived by his wife, Diane, of Glenview, IL, and by his two daughters, Katherine Tenney of Greenwich, CT and Hunter Torres of Bloomfield Hills, MI, along with Katherine’s husband, David, and their three children, William, Alexandra and Jack, and Hunter’s husband, Juan, and their two daughters, Belén and Paloma. He was “Uncle Cotton” to Victoria Akins, John Hunter Fite, and Karen Morgan, the children of his brother, Peter, who predeceased him in 1981, and he nurtured caring relationships with their spouses and children as well. He was also a devoted friend to Peter’s wife, Martha Fite of Vero Beach, FL, and her extended family.

Cotton was a student of Shakespeare, a lover of birds, and a fan of wind-up toys. He found great delight in Diane’s gardens, cooking and art, and he held many people and causes in his prayerful contemplation each day.

There will be a memorial celebration of Cotton’s life at St. Luke’s Episcopal Church, Evanston, IL on Saturday, October 7, 2017 at 10:30 a.m. followed by a light reception.

The family requests that in lieu of flowers, donations be made to Seraj Library Project http://www.serajlibraries.org

Cotton leaves us with this blessing found in his prayer book after his passing. It is one he often gave at the conclusion of worship and surely are words by which he lived.

Life is short,
and we do not have much time
to gladden the hearts of those who travel with us.
So be swift with love.
Make haste to be kind.
And as we go, may the blessing, the peace and the joy
of the Holy One,
who is in the midst of us
be among us and in our hearts this day and always.
AMEN.
—based on the words of Henri-Frédéric Amiel (1821-1881)