You Are Here: Home → Movie Mogul Harvey Weinstein at September Gala: ‘I Am Israeli in My Heart and Mind’

Movie Mogul Harvey Weinstein at September Gala: ‘I Am Israeli in My Heart and Mind’ 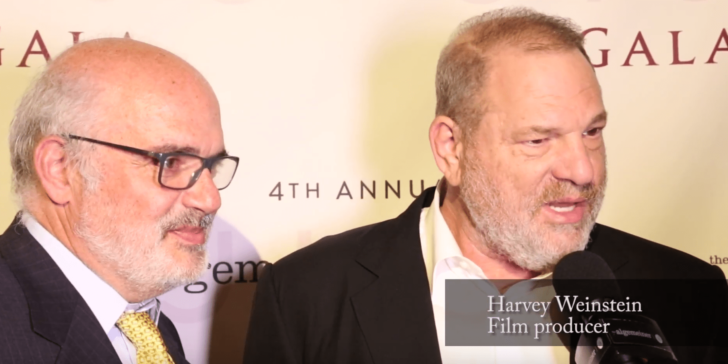 The New York Times, New Yorker, and numerous other news outlets have been reporting widely on accusations that movie mogul Harvey Weinstein, sometimes called one of the most powerful people in Hollywood, sexually assaulted actresses for decades. (NBC News president Noah Oppenheim had earlier covered up the story.) Some of the news stories point out that Weinstein has been known as a supporter of progressive causes and raised money for Hillary Clinton (he has reportedly given Democratic candidates close to a million dollars) , but none mention his longtime support for Israel. Weinstein’s father fought in the Haganah (precurser to today’s IDF) during Israel’s founding war to expel the indigenous Palestinian population.

While numerous politicians have returned Weinstein’s campaign donations and diverse celebrities have condemned his actions among reports that Weinstein’s behavior was widely known for years, the pro-Israel Simon Wiesenthal Center is not withdrawing the “Humanitarian Award” it gave him in 2015.

In Weinstein’s rambling acceptance speech he said that Jews should get “as organized as the mafia” in fighting anti-Semitism, saying it was essential to “start acting now…. if we don’t, we will perish.” At the ceremony, the Center announced that an additional $50 million had been raised to build a sprawling “Museum of Tolerance” complex in Jerusalem. This has caused much controversy, since it involves digging up an ancient Muslim cemetery.

At a gala last month for Algemeiner, Weinstein proclaimed: “I am an Israeli in my heart and mind.”  Algemeiner is a New York based newspaper that reports on Jewish and Israeli issues that was founded after consultation with Rabbi Menachem Mendel Schneerson. Below is the Algemeiner report:

Oscar-Winning Producer Harvey Weinstein at Algemeiner Gala: ‘I Am Israeli in My Heart and Mind’

Oscar-winning film producer Harvey Weinstein expressed his deep love and appreciation for the Jewish state on Monday, saying, “I am an Israeli in my heart and mind.”

Speaking on the red carpet at The Algemeiner‘s fourth annual gala in New York City, Weinstein emphasized, “I love that country, I love what it stands for, I am proud to be Jewish.”

The Hollywood mogul recounted his appearance at The Algemeiner’s gala in 2013, when he presented Holocaust survivor and Nobel Peace Prize laureate Elie Wiesel with the “Warrior for Truth” award. Wiesel served as chairman of The Algemeiner’s Tribute Committee until his passing in 2016. [Editor’s note: Elie Wiesel, while often perceived as a humanitarian, was a longtime supporter of Israel’s oppression of Palestinians.]

“This is one of the most influential presses we have, not only in [the] Jewish world, but all [the] world,” Weinstein observed.

He also spoke of his upcoming movie “Mila 18,” an adaptation of Leon Uris’ acclaimed novel on the Warsaw Ghetto Uprising.

“When people see ‘Mila 18,’ they can subtitle it ‘Jews with guns,’ because this is not about going into the night quietly,” Weinstein said. “This is the birth of the modern Israelis, these were the guys in the ghetto who said we are not going to walk into the concentration camps and get herded like cattle. They said, we’re going to kill some Germans instead.”

A video of Weinstein’s remarks can be viewed below: