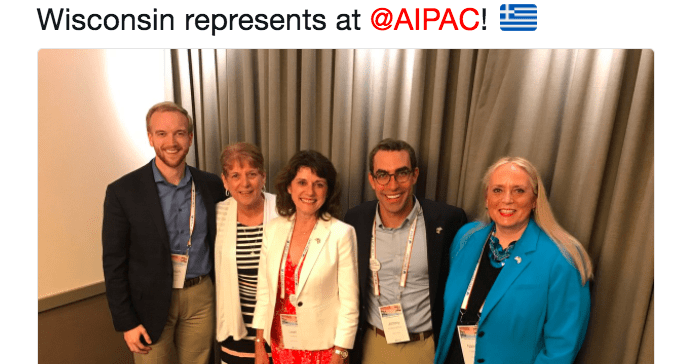 A tweet by Wisconsin State Senator Leah Vukmir (center) about attending an AIPAC convention in 2017. Vukmir and State Representative Dale Kooyenga have introduced legislation against boycotting Israel over its multitude of human rights violations. Israel’s campaign against BDS has also had successes in Spain and France.

“Since Ayelet Shaked (Bayit Yehudi) took over the Justice Ministry, a reinvigorated campaign has been launched in which her office has pursued legal avenues to stymie efforts to boycott Israel.

“To that end, she established an inter-office team headed by the Deputy Attorney General (International Law) Roy Schöndorf.

“In addition the Justice Ministry established contact with leading attorneys in Europe and the US who have undertaken intensive efforts in local courts on all cases involving the BDS movement.

“Indeed, so far the coordination with the lawyers appears to have paid dividends since almost all the cases have resulted in a failure for the BDS.

“For example, as part of the attempt to strike at economies of settlements in the West Bank, Palestinians recently filed a complaint to the US District Court in Washington DC, a federal court, claiming that people and groups operating in the settlements are committing crimes against humanity.

“The complaint however was dismissed after the court refused to consider it on the grounds that it was inserting into the legal realm a sensitive political subject.

“On the other side of the Atlantic, in Spain for example, 24 legal rulings and expert opinions were made against the BDS movement, while in France significant rulings were made against its activists who tried to lead a boycott against Israel.

“For example, one court decision ordered that a financial penalty be imposed on BDS activists demonstrating outside supermarkets calling on consumers to boycott Israeli products.

“Alongside representation on the courts, achievements were recorded in the legislative realm, demonstrated by the fact that in the last year several pieces of legislation have been ratified in US states against the BDS movement.

“Last May, for instance, Texas passed a law forbidding ties with, or investment in, companies that boycott Israel.

“Through Sisyphean work we expose the real face of ‘human rights activists’ and ‘peace activists’ around the world, whose sole goal is to weaken the State of Israel,” Shaked said as she praised the results of her ministry’s initiatives. “This is the new anti-Semitism, only today it is facing a strong and determined state.”

Two Republican state lawmakers in Wisconsin last week introduced legislation to prohibit businesses from engaging in boycotts of Israel as a condition of any state contract.

In recent years, more than 20 U.S. states have passed legislation condemning BDS or prohibiting government business with entities that boycott Israel, with additional states—including Wisconsin—expected to follow before the end of the year.

Released by State Sen. Leah Vukmir and State Rep. Dale Kooyenga, the bill is currently being circulated among both chambers for co-sponsors. The measure states that it “prohibits any state agency or other body in state government and any local governmental unit, including a special purpose district, from adopting a rule, ordinance, policy, or procedure that involves the state agency or local governmental unit in a boycott of Israel or a person doing business in Israel or in a territory under Israeli jurisdiction.”

Vukmir said in a statement, “Boycotts of Israel must be fought because they do not just attack the Jewish state. This propaganda campaign is also the basis for newly emboldened and destructive anti-Semitic attitudes.”

[Editor’s Note: This is based in a newly created definition of “antisemitism” created on behalf of Israel – see this.]

“Israel stands as the only democracy in the Middle East, offering a voice not only to the Jewish citizens of Israel, but to all citizens of Israel regardless of their age, race, sex or religion,” Kooyenga said.

[Editor’s note: Israel is based on systemic discrimination; see, for example, this.]

“This bill demonstrates that Wisconsin is serious about standing with Israel, as our republic has since Israel’s founding nearly 70 years ago.”

Peggy Shapiro, Midwest director of the pro-Israel education organizationStandWithUs, recalled that she “met wit Wisconsin Lt. Gov. Rebecca Kleefisch almost two years ago, and she was adamant about protecting Israel—Wisconsin’s relationship, and making sure…taxpayers were not complicit in acts of anti-Semitism.” [Editor’s note: Kleefisch travelled to Israel on an all-expenses paid trip to Israel in . ]

“Today, StandWithUs is very proud to see Wisconsin engage in a bipartisan rejection of anti-Semitism and discrimination against Israel,” Shapiro told the Haym Salomon Center.

Joining StandWithUs and other groups to advance anti-BDS legislation in Wisconsin is the self-described largest pro-Israel organization in the country, Christians United for Israel (CUFI). With the backing of its nearly 3.6 million members, the group’s lobbying arm, the CUFI Action Fund, said it played a significant role in bringing this issue to the forefront.

“CUFI members across the country are fed up with BDS and excited to act to stop it,” said CUFI board member David Brog. [[Editor’s note: David Brog, who is Jewish, is CUFI executive director.] “In Wisconsin, our local leaders were able to join with the Jewish community to make a powerful pro-Israel team and secure the introduction of a strong anti-BDS bill. We look forward to working with our partners to ensure that this bill becomes law and Wisconsin becomes the 23rd state to stand up to BDS.”

The BDS campaign against the Jewish state began in 2005, claiming to be a form of “non-violent” resistance against Israel’s so-called “settler colonialism, apartheid and occupation over the Palestinian people.”

A study conducted last year by the anti-Semitism watchdog group AMCHA Initiative examined more than 100 public and private colleges and universities from January to June of 2016. It found that 287 anti-Semitic incidents occurred at 64 schools, compared to 198 occurrences during the same period the previous year, reflecting a 45-percent increase.

The study revealed a rapidly growing correlation between anti-Semitism and BDS activism.

[Editor’s note: AMCHA is a pro-Israel organization that calls criticism of Israel “antisemitic.”]