You Are Here: Home → Israeli Army Abducted 400 Palestinians, Including 55 Children, In September 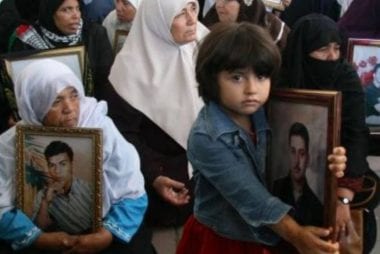 Israel currently has over 6,000 Palestinians in prison, 300 of which are children. For more info visit http://ifamericaknew.org/stat/prisoners.html

The Palestinian Center for Detainees’ Studies has reported that Israeli soldiers have abducted more than 400 Palestinians, including 55 children and eight women, in September.

Researcher Riyad al-Ashqar said the soldiers, and navy, have abducted seven fishermen close to the shore in the Gaza Strip, in addition to abducting Ramzi ‘Abed, who teaches at the Islamic University in Gaza, when he tried to cross Erez Terminal on his way to a conference in Italy.

In addition, the soldiers abducted a patient, identified as Fadel Mazen Abu Haseera, 27, also at Eretz Terminal, as he was in his way to receive treatment in the al-Makassed hospital, in Jerusalem, even though Israel granted him an entry permit.

Three more Palestinians were abducted by the soldiers while trying to breach the border fence, in the eastern part of the Gaza Strip, in search for work in Israel due to extreme poverty rates in the besieged coastal region.

In the West Bank, the soldiers invaded the home of legislator Abdul-Rahman Zaiden, in Deir al-Ghusun village, near the northern West Bank city of Tulkarem, and ransacked it for several hours.

The legislator was interrogated for several hours at a military base, before the soldiers eventually released him.

Al-Ashqar added that September also witnessed a serious escalation in the abduction of women and children, as the army detained 55 children, including Mohammad as-Sa’ou, only 10 years of age, who was taken prisoner from his home, in Sheikh Jarrah neighborhood, in occupied East Jerusalem.

The soldiers also abducted eight women, including a child identified as Sally Mohammad Shawwa, 14 years of age, from Jerusalem, and released her later after imposing a high fine.

In addition, the soldiers abducted three girls, identified as We’am Hamada, Hadeel Sob Laban and Hiba al-Joulani, from Jerusalem, and released them later under the condition of not entering the Old City and the Al-Aqsa Mosque, for fifteen days.

Al-Ashqar added that the army also issued 100 arbitrary Administrative Detention orders, holding the detainees captive without charges or trial. 33 of these orders were issued against the detainees for the first time, and 67 others were renewals of existing orders.

The Administrative Detention orders that were issued in September vary between two and six months, and one of these orders was against Professor Essam Al-Ashqar of the Najah National University in Nablus.

The army also escalated its violations against the detainees, including repeated invasions and violent searches of their rooms, arbitrary transfers to various prisons, in addition to forcing many detainees into solitary confinement.