You Are Here: Home → Why is Israel supporting Kurdish secession from Iraq?

Why is Israel supporting Kurdish secession from Iraq? 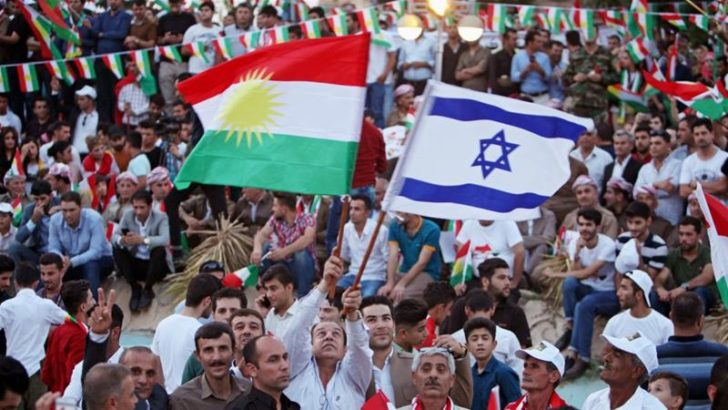 Israeli support for Kurds is part of Israel’s “divide and conquer” strategy. Palestinian analyst Lamis Andoni writes that Kurds’ contributions have enriched the Arab World for centuries and that their rights should be supported. “Arabs are now faced with a very difficult dilemma between supporting the Kurdish right to self-determination, an inalienable right for all people, and resisting Israeli attempts to become dominant in Iraqi Kurdistan.”

So far, Israel has been the only state to support the Kurdish secession from Iraq, even celebrating the outcome of the September 25 referendum, in which an overwhelming majority of Iraqi Kurds voted for breaking away from Baghdad.

Israeli enthusiasm for Kurdish independence has little to do with compassion for the Kurds, whether in Iraq or elsewhere, and more to do with geopolitical interests. In fact, it is beyond ironic for Israel, a state founded and sustained on brutal military occupation and apartheid, to champion freedom for the Kurds or any group of people in the world.

Israel not only denies self-determination for the Palestinian people, but it also has a record of actively supporting criminal juntas in Central and South America and the former Apartheid regime in South Africa. Also, Israel has never supported any other national liberation movement in its history.

Israel’s support for an independent Kurdish state is solely motivated by geopolitical reasons. Israel wants to secure the flow of oil supplies from the Kurdish Autonomous Region, but more importantly, it wants to build a pro-Israeli entity that cuts through the Arab World.

Israel already imports 77 percent of its oil supplies from Iraq’s Kurdish region. These imports are extremely important for the Zionist state, as it does not have access to the natural resources of oil-rich Gulf states. Also, Israel believes that an independent Kurdish state can serve as a potential foothold for the Israeli military and intelligence, giving the country leverage against Iran, Syria and Iraq. The creation of an independent Kurdish state in the Middle East fits perfectly into Oded Yinon’s 1982 plan for the Middle East, which advocated the split up of the Arab World along ethnic and sectarian lines to strengthen Israel and expand its hegemony.

The Israeli backing of the Kurdish secession from Iraq is further igniting Arabs’ suspicions that such a move would be a concrete step towards the disintegration of the Arab World, something that could trigger clashes and even wars.

Israel perceives a future Kurdish state as a potential non-Arab ally in the region – an ally that is not directly affected by the Palestinian cause. Since its inception, Israel has followed the “alliance of the peripheries” strategy, conceived by its first Prime Minister David Ben Gurion, to strengthen Israel’s ties with non-Arab Muslim states or groups in the region, in order to break the isolation of the Zionist state.

As part of this doctrine, Israel reached out to Kurdish leader Mustafa Barzani, the father of current Kurdish President Masoud Barzani, several times throughout his time in office. As a result of these efforts, Mustafa Barzani visited Israel twice, once in 1968 and once in 1973. Yet, these efforts did not amount to much. Kurds did not show any strong support for Israel or animosity towards the Palestinians.

Thus the scene of Israeli flags flying in Kurdish towns during the referendum along with reported slogans such as “We are the second Israel” suggest an alteration of the Kurdish political culture and an apparent  break from the past when Kurdish fighters trained and fought alongside members of the Palestine Liberation Organisation (PLO) in Beirut in the late sixties, seventies and early eighties.

Since then Israel has succeeded, with the help of Kurdish leaders like President Masoud Barzani, to infiltrate Kurdish society and end a once strong Kurdish association with the Palestinian cause.

There is no doubt that the tyranny of the Arab states and their failure to adequately deal with Kurdish rights pushed new generations of Kurds away from the Arab World and into the lap of Israel.  As Iraq plummeted into sectarian violence and the Islamic State of Iraq and the Levant (ISIL, also known as ISIS) group started its campaign of terror, rape and grisly atrocities, a new fault line between the Kurds and the rest of the Arab world has emerged.

But the two main turning points in Kurdish-Arab relations were the 1991 Western-imposed no-fly zone that went beyond protecting the Kurdish population into tearing the Kurdish region from Iraq and the 2003 US-led invasion and occupation of Iraq. The catastrophic invasion triggered internal strife that further alienated the Kurds from the rest of the country and allowed for increased Israeli presence in the area.

In its declared and enthusiastic support for Kurdish independence, Israel has openly tried to draw similarities between its history and the Kurdish struggle for statehood. By doing so, Israel has been trying to erase the parallels between the Kurdish and Palestinian struggles against colonialism and oppression.

The new revisionist story, in the words of former Likud Minister Gideon Saar, is that the Kurds and the Jews are two minority groups in the Middle East, but that the Jews have achieved statehood while the Kurds have not.

“The Kurds have been and will continue to be reliable and long-term allies of Israel since they are, like us, a minority group in the region,” he said.

Such interpretation of history is not only self-serving, but false. Kurds have been an integral and authentic part of the region and of the Arab World – they are not colonisers, and they did not use military power to expropriate lands or dispossess people.

While there has always been a Jewish minority in historical Palestine and the Arab World,  Zionism was not part of an indigenous movement, but was born in Europe to address what was called the “Jewish question” triggered by  institutionalised persecution of and pogroms committed against Jews across Europe in the first half of the 20th century.

Zionism did not provide a vision for ending discrimination against European Jews but embarked on a colonialist movement to establish a Jewish homeland in Palestine through the forced usurpation of its lands and dispossession of its people.

The Israeli attempt to draw parallels between Zionism and the plight of the Kurdish people, whether in Iran, Turkey, Syria or Iraq is blatant propaganda to vindicate its colonial project, its occupation of Palestine and continued crimes against the Palestinians.

The provocative photos and footage of Israeli flags in Erbil and Kirkuk, as painful as they are to us, should not lead to the isolation or demonisation of the Kurds. We have to acknowledge the responsibility of Arab states, as well as Iran and Turkey in the historical injustice that was inflicted on the Kurds.

Arguments that Kurds are a pawn to Israel and the West ignore the fact that any persecuted minority, regardless of its ethnicity or religion, can fall prey to foreign influence and interference, and we cannot deny their right to self-determination.

Arabs are now faced with a very difficult dilemma between supporting the Kurdish right to self-determination, an inalienable right for all people, and resisting Israeli attempts to become dominant in Iraqi Kurdistan.

There are no easy answers, but it is important to send a message to the Kurdish people that we support their right to self-determination by increasing ties between Kurdish and Arab political parties, civil societies and intellectuals.

We can’t afford a break with Kurdistan, neither morally nor strategically. It is time to reach out and be there for the Kurds. We should make sure the Iraqi central government, which has done a dismal job so far, does not attempt to oppress and control the Kurdish people, but rather that it negotiate with Kurdish leaders on the basis of respect and equality.

Regardless of what we think of Masoud Barzani and his corruption, we should remember that it is the Kurdish people who we should reach out to. After all, many Arab leaders are no different from Barzani, and his failings do not erase the Kurdish people’s importance in the region – Kurds are a people whose culture and contributions have enriched the Arab World for centuries.

It is not too late to prevent a break between Kurds and Arabs. It is important to counter Israel’s destructive plans for the region, but turning Kurds into an enemy of the Arab world, just because they are seeking self-determination, is wrong and self-defeating.

It’s time for us to stop repeating the phrase “Kurdistan is a second Israel”, even though some Kurds have been using it. Kurdistan is not a new Israel, and it will never be.

Lamis Andoni is an analyst and commentator on Middle Eastern and Palestinian affairs.