You Are Here: Home → Pro-Israel mega-donor Sheldon Adelson dies at 87 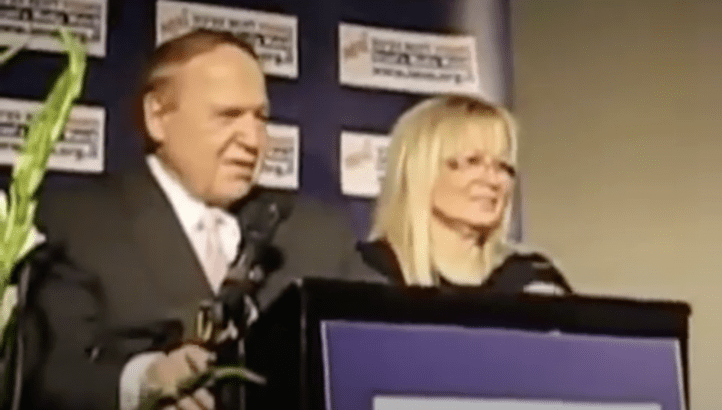 Still image from video of Sheldon Adelson, accompanied by his wife Miriam, speaking to an Israeli group in July 2010.

Sheldon Adelson, one of the richest people in the world, long deployed his wealth on behalf of Israel. His Israeli wife, reportedly the driver of many of his actions, is even richer…

US media are reporting widely on the recent death of Sheldon Adelson, the Republican mega-donor who passed away on Monday following complications related to treatment for cancer.

Adelson was a multi-billionaire casino owner and one of the richest men in the world. He is known for deploying his wealth on behalf of Israel.  Axios reports: “Adelson was a fierce supporter of Israel who used his wealth to elevate the issue as a top cause for many GOP officials.”

Adelson and his wife Miriam, an Israeli citizen who had served in the Israeli military, were Trump’s largest campaign funders, reporting that the couple “have donated more than $525 million to federal political campaigns and committees since the 2010 cycle, per OpenSecrets.”

While some media are calling Sheldon a ‘patriot,’ there are indications that his deepest loyalty was to Israel.

In 2010 he told an Israeli group that he regretted that he had worn an American uniform rather than an Israeli one, and that he hoped his son would become a sniper for the IDF (Israeli military):

Adelson played a central role in many of the Trump administration’s Mideast policies.

The Times of Israel reports: “In his last years, Adelson’s influence over American and Israeli political life took an outsized turn with both Netanyahu and Trump in power. He was credited as the driving force behind Trump’s decisions to move the embassy from Tel Aviv to Jerusalem and exit the Iran nuclear deal.”

Most important legacy: ‘impact on Israel’

When Adelson was once asked what he hoped his legacy would be, Adelson said it wasn’t his glitzy casinos or hotels, but rather his impact in Israel.

On top of his uniquely massive, record-breaking campaign donations, Adelson deployed his wealth on behalf of Israel in numerous additional ways. The Times of Israel reports:

Adelson helped underwrite congressional trips to Israel, helped build a new headquarters for the lobbying group the American Israel Public Affairs Committee (AIPAC), and later was a top supporter of the Israeli-American Council, whose conferences have attracted top Republicans (Vice President Mike Pence) and Democrats (House Speaker Nancy Pelosi). He sponsored Birthright trips to Israel for young Jewish adults that were criticized by some participants as intolerant of opposing views.

It is expected that Miriam Adelson, who was already a billionaire even before whatever amount Adelson has bequeathed her, will continue the donations on behalf of Israel.

The UK Guardian reported in 2019: “Evidence suggests that she is the driver in the couple’s political and philanthropic activities, whether pushing for the relocation of the US embassy to Jerusalem from Tel Aviv or donating an unprecedented $113m to this year’s midterm elections.”

“Miriam turns out to be far wealthier than her husband, who was ranked #21 on the Forbes 2018 billionaire ranking. She appears nowhere on the Forbes list, but according to the corporate filings of the Las Vegas Sands Corp casino company, which accounts for the bulk of the couple’s wealth, she directly controls a 41.6% stake, compared to her husband’s 10%.

Worth $17.4bn at the current stock price, her holdings make Miriam wealthier than a number of the world’s richest men, including Rupert Murdoch and Charles Schwab.

Miriam was born in 1945 in what was then called, as the Guardian notes, Palestine.

UPDATE: A day after this article, Israel’s Ha’aretz newspaper published this valuable report: “The Fate of Adelson’s Political Empire Lies in the Hands of His Israeli Widow Miriam”