You Are Here: Home → Press groups concerned about US jailing of Iranian news anchor; court appearances shrouded in mystery 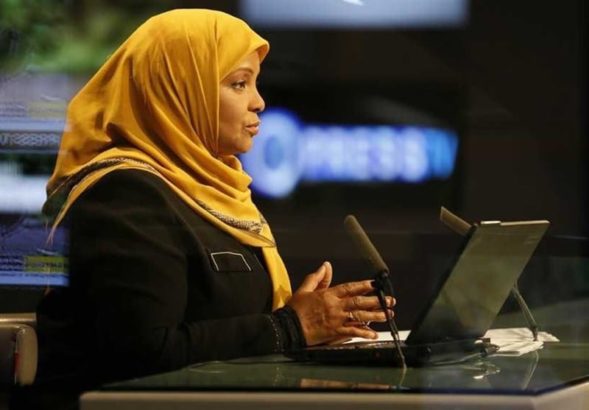 Press TV news anchor Marzieh Hashemi, a U.S, citizen, has been incarcerated in the U.S. for 6 days. It appears that no criminal charges have been filed. (Photo from Alahed News)

Committee to Protect Journalists and PEN call for Justice Department to state why it has jailed US citizen Marzieh Hashemi, a prominent journalist with Iran’s Press TV. FBI & Justice Dept refuse to comment… possible court appearances not listed in dockets…

Two organizations that protect journalists have issued statements of concern about the U.S. jailing of Marzieh Hashemi, a news anchor for Iran’s Press TV.

U.S. authorities have refused to provide information on Hashemi, an American citizen. She has been in federal custody since Sunday and is currently being held in Washington DC’s Correctional Treatment Facility (CTF).

The Committee to Protect Journalists (CPJ) and PEN issued statements calling on the government to explain why she is being held.

In its statement, CPJ said: “We are concerned by the arrest of a journalist for Iranian state TV, Marzieh Hashemi, and call on the U.S. Department of Justice to immediately disclose the basis for her detention for the past five days.”

PEN America said: “Without further information about why Hashemi was arrested, there are concerns about whether she is being targeted either for her documentary work about Black Lives Matter or as a retaliatory action in response to the Iranian government’s detention of American citizens. Either case would be an egregious violation of democratic norms.”

Hashemi was suddenly arrested by the FBI on Sunday at the St. Louis airport during a trip to the U.S. from her home in Iran. An African-American whose maiden name was Melanie Franklin, Hashemi often visits her children and grandchildren in the U.S.

Hashemi, a widow, had been visiting family in New Orleans to plan a family reunion, filming a documentary on Black Lives Matter in St. Louis, and was on her way to visit a sick brother in Colorado.

Her son says Hashemi had not been previously contacted by the FBI, which shackled her and placed her in handcuffs. He says authorities told him that she is being held as a “material witness,” but says his mother is being treated as an inmate, not a witness.

“She is currently in prison, she has an inmate number, she is behind bars,” he says.

He says he and his siblings have been subpoenaed to appear before a grand jury.

Hashemi has complained of her treatment. Authorities did now allow her to contact her family for 48 hours after her arrest. Her head scarf, required by her religious beliefs, was forcibly removed.

She told family members that she is being treated “like a criminal,” although it appears that no criminal charges have been filed against her.

Her son, a research fellow at the University of Colorado, said his mother “is harassed regularly. Every time she travels using air travel, she is pulled to the side. Each time it’s an hour-long, even two-hour-long interview, interrogation. This has been going on for almost a decade now.”

According to CTF records, Hashemi was in court yesterday and is there again today. However, her name does not appear on court dockets.

Numerous phone calls to both federal and local courts failed to locate her, although it appears that she was in court January 15th. (Information on this will be updated as it becomes available.)

Ricardo J. Bascuas, a professor at the University of Miami School of Law, says that the constitutionality of the material witness law has “never been meaningfully tested.” He told the Associated Press that the government uses it “when they need a reason to arrest somebody but they don’t have one.”

Bascuas, whose law degree is from Yale Law School, also questions detaining individuals because the person is allegedly a witness.

According to Bascuas, “The Fourth Amendment to the US Constitution plainly makes it unconstitutional to detain any witness because, by definition, there is never ‘probable cause’ to believe a witness committed a crime.”

In addition, he says, the Fourth Amendment forbids “unreasonable seizures.”

“An unreasonable seizure is one that is irrational or arbitrary,” he says, “i.e., based on hunches or gut feelings rather than facts. By definition, there is never good cause to believe a witness probably committed a crime. So, the Fourth Amendment plainly forbids arresting a witness.”

Bascuas says “when federal authorities arrest a material witness despite the Fourth Amendment, they are making up the rules as they go… Only the government knows whether a material witness is also a target, a suspect, a person of interest, or just someone they can’t rule out as one of those things.”

UPDATE: Son says she is to appear before a grand jury today

According to a U.S. official, Hashemi was arrested to be used as a bargaining chip to pressure Iran, which is holding several Americans on espionage charges.

Iran has been accused of holding the Americans as bargaining chips in negotiations with the U.S., which launched crippling sanctions against Iran in 2012.

Trita Parsi, an Iran expert and professor at Georgetown University, told NPR: “As tensions between the United States and Iran increase, there seems to also be an increasing trend of citizens who may not be involved in anything falling in the crossfire between the two governments.”

Human Rights Watch directors, journalists, and others have tweeted concerns about Hashemi’s arrest.

“I wanna know more about why this Black female journalist has been arrested by the US. Marzieh Hashemi – American born, Muslim television anchor in Iran – was allegedly arrested in St. Louis and taken to DC; only offered pork to eat, stripped of her hijab and photographed. Why?”

The U.S. incarceration of a senior Iranian journalist, combined with Hashemi’s humiliating treatment, has elicited outrage in Iran.

Foreign Minister Javad Zarif called the detention a “political action” that tramples on freedom of speech and demanded her immediate release.

The New York Times reports that Nader Talebzadeh, an Iranian media pundit and filmmaker, described Hashemi’s arrest as a “concocted plan by the Trump administration” to elicit a reaction from Iran. “This is intimidation and a provocation against Iran,” he said.

UPDATE: The case has been partially unsealed.

This article will be updated as additional information becomes available. (For a short while we mistakenly posted an article about a motion to unseal the case, but this was from 2015 and was about a different person; the post has been removed.)

Associated Press Interview with Hashemi’s son, Hossein Hashemi, a research fellow at the University of Colorado: