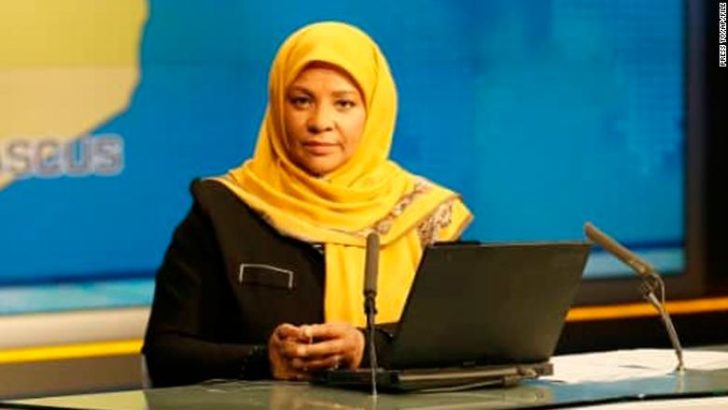 American citizen Marzieh Hashemi is a news anchor for Iran’s Press TV.  She has been jailed by the U.S. while on a visit to her family. (Photo from CNN)

The US has jailed prominent Press TV journalist Marzieh Hashemi, an American citizen, apparently as a “material witness”– ‘a charge authorities use when they need a reason to arrest somebody but don’t have one.’ She was visiting family & filming a documentary on Black Lives Matter when she was detained at the St. Louis airport, handcuffed and shackled.

The U.S. Justice Department and FBI continue to refuse to comment on the jailing of Marzieh Hashemi, documentarian and news anchor of Iran’s English language station Press TV.

The 59-year-old Hashemi, born Melanie Franklin in New Orleans, is an American citizen. She was in the U.S. filming a documentary on Black Lives Matter and visiting family  when the FBI suddenly arrested her.

Hashemi is being held in Washington DC’s Correctional Treatment Facility. According to a Department of Corrections worker she is in court now, but phone calls to DC district courts failed to find her.  (information on this will be updated as it becomes available.)

Hashemi was held 48 hours before being allowed to contact her family. She has complained of ill treatment. Authorities forcibly removed her head scarf and took her away in handcuffs.

Her son says he was told that she is being held as a “material witness.”

AP reports that the constitutionality of the material witness law has “never been meaningfully tested,” according to Ricardo J. Bascuas, a professor at the University of Miami School of Law.  Bascuas says the government uses it “when they need a reason to arrest somebody but they don’t have one.”

Her son, a research fellow at the University of Colorado, told the Associated Press the family has “no idea what’s going on.” He says his mother, a widow, had not been contacted by the FBI before she was detained and would “absolutely” have been willing to cooperate with authorities.

He told AP  that his mother lives in Iran and comes back to the U.S. about once a year to see her family, usually working on a documentary as well.

A widow, Hashemi has three children and several grandchildren living in Colorado. Hashemi was arrested in St. Louis, after visiting relatives in the New Orleans area, and was next going to Denver to visit a sick brother.

Hashemi’s brother, Milton Leroy Franklin of a New Orleans suburb, told AP that she had visited to help plan a family reunion. “We all got together, a small celebration, and prepared for the next time she would come,” Franklin said.

Hashemi’s son said his mother “is harassed regularly. Every time she travels using air travel, she is pulled to the side. Each time it’s an hour-long, even two-hour-long interview, interrogation. This has been going on for almost a decade now.”

He said his mother told him she was driving to New Orleans despite a snowstorm in Colorado “just because of the difficulty in air travel.”

The family is trying to hire an attorney, but her son says they’ve had difficulty because she has not been charged with a crime.

A U.S. official has said that Hashemi is being detained to use as a bargaining chip to pressure Iran to release Americans it is holding on espionage charges.

CBS reports that some Americans arrested by Iran have similarly “previously been used as bargaining chips” in negotiations with the U.S. Iranians have been suffering from crippling economic sanctions imposed by the U.S. in 2012.

Some U.S. analysts say that arresting an individual to pressure a foreign government can be problematic. Former CIA officer and counter-terrorism expert Philip Giraldi says holding someone “as a hostage under false or dubious legal pretenses is not only ineffective, it will inevitably lead to retaliation in kind when Americans travel to foreign countries.”

According to CBS, “Federal law allows judges to order witnesses to be arrested and detained if the government can prove their testimony has extraordinary value for a criminal case and that they would be a flight risk and unlikely to respond to a subpoena. The statute generally requires those witnesses to be promptly released once they are deposed, however.”

It is unknown what judge ordered the arrest and on what alleged evidence.

The U.S. arrest of a respected senior journalist, and the abusive treatment she describes, has caused outrage among many Iranians. Iran’s state broadcaster IRIB held a news conference saying: “We will not spare any legal action” to help her. Press TV aired file footage of her anchoring news programs.

Acccording to a Press TV report, Iranian Foreign Minister Javad Zarif says that because Hashemi’s late husband was Iranian, she is an Iranian citizen. This gives Iran the right to look after her interests.

Zarif said that she is wrongfully imprisoned and that her arrest is a “clear affront to freedom of expression” and “political abuse of an innocent individual.”

Some Americans have also objected. Laura Petter of Human Rights Watch tweeted: “Material witness statue? Smells of retaliation and harkens back to post 9/11 days when the US grossly abused this statute. US needs to explain now grounds for holding Hashemi and provide process immediately.”

Journalist Jarrett Hill tweeted: “I wanna know more about why this Black female journalist has been arrested by the US. Marzieh Hashemi – American born, Muslim television anchor in Iran – was allegedly arrested in St. Louis and taken to DC; only offered pork to eat, stripped of her hijab and photographed. Why?”

In an interview with Press TV, law professor Ricardo J. Bascuas explains that if Hashem is being incarcerated as a “material witness,” the government’s action would appear to be illegal.

Bascuas says that “the Fourth Amendment to the US Constitution plainly makes it unconstitutional to detain any witness because, by definition, there is never ‘probable cause’ to believe a witness committed a crime.”

In addition, he said, the Fourth Amendment forbids “unreasonable seizures.”

Bascuas explained: “An unreasonable seizure is one that is irrational or arbitrary — i.e., based on hunches or gut feelings rather than facts. By definition, there is never good cause to believe a witness probably committed a crime. So, the Fourth Amendment plainly forbids arresting a witness.”

Bascuas said “when federal authorities arrest a material witness despite the Fourth Amendment, they are making up the rules as they go… Only the government knows whether a material witness is also a target, a suspect, a person of interest, or just someone they can’t rule out as one of those things.”

He said that the word “material” cannot be precisely defined, giving the government a free hand to arrest just anyone “especially when the ‘proceeding’ is an investigation that only the government knows the contours of.”

Alison Weir is executive director of If Americans Knew, president of the Council for the National Interest, and author of Against Our Better Judgment: The Hidden History of How the U.S. Was Used to Create Israel. The article will be updated as additional information becomes available.