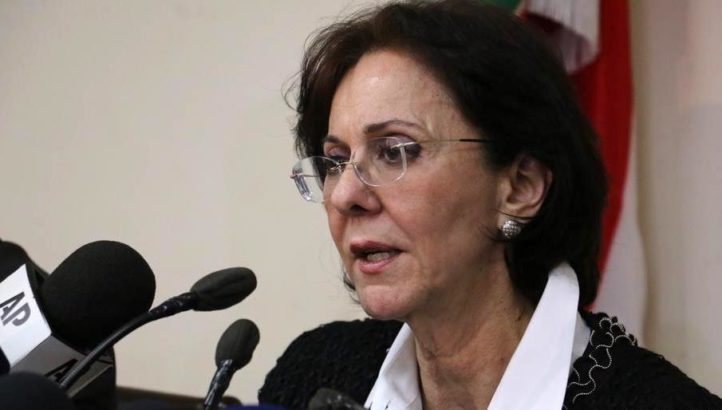 The following is the resignation letter by ESWA Executive Secretary Rima Khalaf in response to the formal request by UN Secretary General Antonio Guterres that ESCWA withdraw the publication of a scholarly report (below) that found Israel guilty of apartheid.

I have carefully considered your message conveyed through the Chef de Cabinet and assure you that at no point have I questioned your right to order the withdrawal of the report from our website or the fact that all of us working in the Secretariat are subject to the authority of its Secretary-General. Nor do I have any doubts regarding your commitment to human rights in general, or your firm position regarding the rights of the Palestinian people. I also understand the concerns that you have, particularly in these difficult times that leave you little choice.

I am not oblivious to the vicious attacks and threats the UN and you personally were subjected to from powerful Member States as a result of the publication of the ESCWA report “Israeli Practices towards the Palestinian People and the Question of Apartheid”. I do not find it surprising that such Member States, who now have governments with little regard for international norms and values of human rights, will resort to intimidation when they find it hard to defend their unlawful policies and practices. It is only normal for criminals to pressure and attack those who advocate the cause of their victims.  I cannot submit to such pressure.

Not by virtue of my being an international official, but simply by virtue of being a decent human being, I believe, like you, in the universal values and principles that have always been the driving force for good in human history, and on which this organization of ours, the United Nations is founded. Like you, I believe that discrimination against anyone due to their religion, skin color, sex or ethnic origin is unacceptable, and that such discrimination cannot be rendered acceptable by the calculations of political expediency or power politics. I also believe people should not only have the freedom to speak truth to power, but they have the duty to do so.

In the space of two months you have instructed me to withdraw two reports produced by ESCWA, not due to any fault found in the reports and probably not because you disagreed with their content, but due to the political pressure by member states who gravely violate the rights of the people of the region.

You have seen first hand that the people of this region are going through a period of suffering unparalleled in their modern history; and that the overwhelming flood of catastrophes today is the result of a stream of injustices that were either ignored, plastered over, or openly endorsed by powerful governments inside and outside the region. Those same governments are the ones pressuring you to silence the voice of truth and the call for justice represented in these reports.

Given the above, I cannot but stand by the findings of ESCWA’s report that Israel has established an apartheid regime that seeks the domination of one racial group over another. The evidence provided by this report drafted by renowned experts is overwhelming. Suffice it to say that none of those who attacked the report had a word to say about its content. I feel it my duty to shed light on the legally inadmissible and morally indefensible fact that an apartheid regime still exists in the 21st century rather than suppressing the evidence. In saying this I claim no moral superiority nor ownership of a more prescient vision. My position might be informed by a lifetime of experiencing the dire consequences of blocking peaceful channels to addressing people’s grievances in our region.

After giving the matter due consideration, I realized that I too have little choice. I cannot withdraw yet another well-researched, well-documented UN work on grave violations of human rights, yet I know that clear instructions by the Secretary-General will have to be implemented promptly. A dilemma that can only be resolved by my stepping down to allow someone else to deliver what I am unable to deliver in good conscience.  I know that I have only two more weeks to serve; my resignation is therefore not intended for political pressure. It is simply because I feel it my duty towards the people we serve, towards the UN and towards myself, not to withdraw an honest testimony about an ongoing crime that is at the root of so much human suffering. Therefore, I hereby submit to you my resignation from the United Nations.

Below is the report, which has been removed from the UN website.