You Are Here: Home → Palestinian child, shot in head by Israeli soldier, hemorrhaging in brain 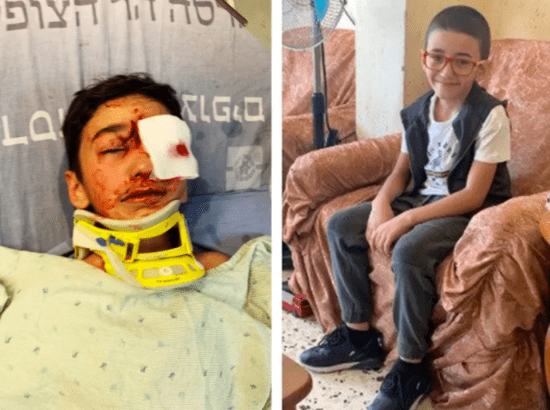 Malek Issa in the hospital after being wounded, and before the shooting. (Ha’aretz)

The family of the wounded Palestinian child, identified as Malek Issa, only eight years of age, has reported that their son is in a critical condition at Hadassah Medical Center, after an Israeli soldier shot him with a rubber-coated steel bullet in the head, in occupied Jerusalem, leading to hemorrhaging in the brain and skull fracture; the child will likely lose his left eye.

They said that their child was walking back home in the al-‘Isawiya town, in Jerusalem, when a soldier shot him with rubber-coated steel bullets between his eyes, causing a serious skull fracture, which also led to hemorrhaging in the brain.

The child was rushed to Hadassah medical center in al-‘Isawiya, suffering life-threatening wounds, and will likely lose his left eye.

The incident took place after Malek and his sisters were heading back home from school. They first took a bus to its last stop in the center of al-‘Isawiya, only 200 meters away from their home, and called their mother informing her of their arrival.

The mother asked them to walk the short distance to their home to enjoy the sunny day, and they started walking before stopping at a local shop.

After exiting the shop, an Israeli soldier fired rubber-coated steel bullets at them, wounding Malek in the face, causing the serious injury.

His father stated that one of his sons lives just nearby where Malek was shot and rushed to his rescue before an ambulance was called and moved him to the hospital.

He added that it looks like his child was shot from at a close range, and that the situation was calm before the soldiers starting firing.

Eyewitnesses said the soldiers invaded the town to abduct a young man and fired rubber-coated steel bullets and gas bombs at random, apparently to force the Palestinians away. 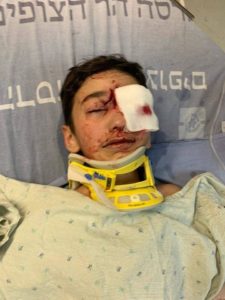 A Palestinian child was shot and injured by a rubber-coated steel bullet, on Saturday, when Israeli forces opened fire toward civilians in occupied East Jerusalem, according to the Palestinian News and Info Agency (WAFA).

Witnesses said the minor, Malik Issa, while walking home from school in al-‘Isawiyah neighborhood, was struck with a rubber-coated metal bullet in the head by Israeli gunfire.

The child was evacuated to Hadassah Medical Center for treatment, his current medical condition remains unknown at the time of reporting.

“The boy’s father, Wahel Issa, said there were no stones being thrown or violent protests when police opened fire.”

“According to his family, doctors said he is likely to lose one of his eyes, and is at risk of losing the other.” He sustained brain damage.

Previous incidents of Israel soldiers shooting people in the head

Children Shot in the Head: Not Just in Pakistan